After discovering the Colorado River I was back at camp relaxing, reading my book.  I thought I heard a vehicle go by.  I looked out front.  A big class A RV with a trailer full of motorcycle had pulled in a hundred feet away from us.  This isn't good.  Eight guys stepped out, unloaded bikes and began the mayhem.  Some were blasting cross country and a couple buzzed right by camp.  That's it!  I went outside, stood there and gave them the Look.  One big guy was sitting on his bike dressed in his motorcycle gear and helmet.  Good thing as I didn't want to hurt him.  He waved.  I marched over.  Nicely I pointed out the tire tracks right by our window.  I explained that all cross country riding was restricted to established trails.  "That tall grass is dry and a fire could start very easily." 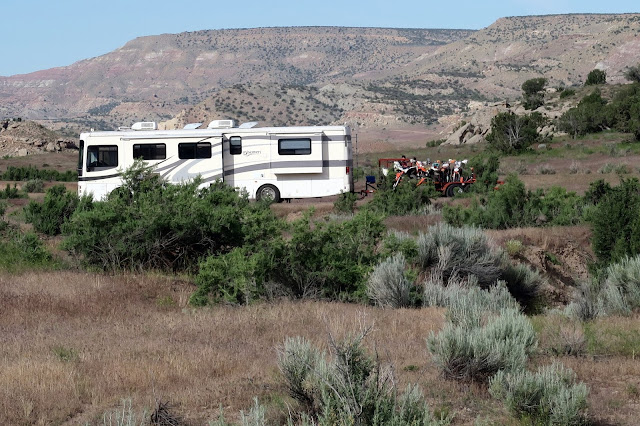 He was receptive to what I said, apologized and said he would talk to the rest.  I told him I had nothing against motorcycles as I had raced them in the desert myself for years.  We shook hands and I didn't have to hurt him.  Things were better afterwards and the next morning I felt I could tolerate them being there for after all, once they left to ride they were gone all day. 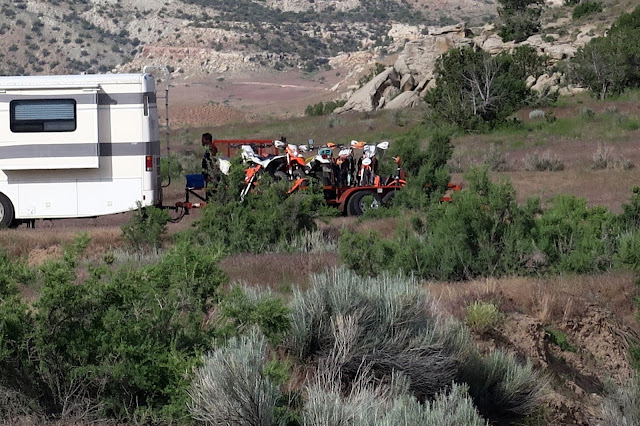 After they left that morning I took Beans for her walk.  You'll never guess what we found.  A massive turd and ribbon of toilet paper right near their RV.  (I have a photo but don't think you really want to see a huge pile of ....) WHY?  They have a toilet in there.  I had just cleaned the wash up too.  That did it.  I hopped on my bike, went by our old spot, the people who were there just left that morning.  I parked Gracie (yeah, I gave my bike a name) jogged back to camp, threw everything in, motored over there and had camp set up all in less than 15 minutes.

They left the following day and the above photos were taken from distance as they loaded up.