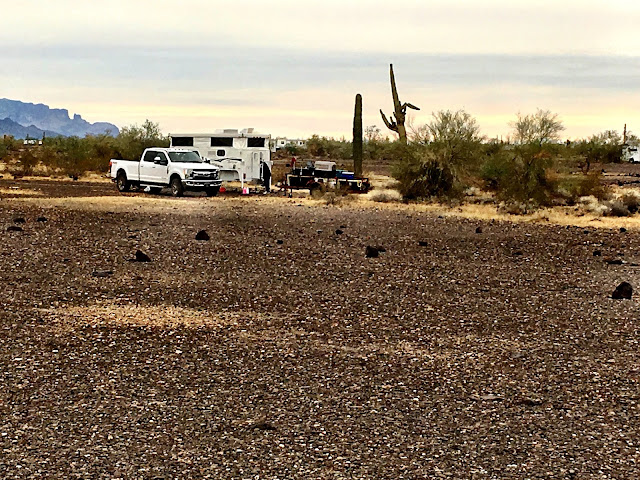 These folks moved in across from us late last week. Well, they were far enough away (barely) that I was okay with it.  Much better than having one of humongous coaches or monstrous fifth wheel trailers in my view.  Here you see he's unloaded the camper from the bed of his truck.  The camper is a low profile model that you raise the roof by hand (lifting) once settled giving you room to stand up.  The sides of the raised part are made of a type of rubberized canvas so as you can imagine this unit isn't well insulated from the cold.  So every morning (before the sun was up) he'd start up his generator so that, I assume, they could run the heater inside.  The generator was in the middle of his flatbed trailer surrounded by boxes and wasn't one of those exceedingly loud contraptions.  Nevertheless it has been real quiet here during our stay and that humming noise was annoying.  I gave him, or rather myself, two days.  On the morning of the third day that was it.  I was going to move.  Not far. Just on the other side of the wash with a huge Palo Verde tree between us filtering out the sound.  I finished up breakfast and was preparing to go outside and start the move.  I looked out the window and it appeared he was loading up camp gear into the trailer.  Could they be leaving?  Yes in fact they were.  Yippee!  I found out by a third party (I never talked with the guy) that his wife/girlfriend (African American) wasn't digging being here.  She wanted to go home.  They were from Oklahoma!  Can you imagine looking forward to coming out here for sunshine and warmth (relative speaking) for the winter and then heading back within a week?  The poor guy spent all morning getting loaded up to leave and pulled away right at noon.  She did absolutely nothing in helping out except guiding him backing up underneath the camper.  In fact I only saw her outside twice sitting in a camp chair for a short time, all bundled up.  Otherwise she was inside that camper all the time.  Ya know, if maybe you stepped outside and took a walk around every once in awhile you might grow to appreciate your surroundings just a wee bit.  They were in their 50's I'd guess and this was to be a test run thinking about making life on the road a new lifestyle.  Buddy, it ain't happening for you.
Posted by John @ Beans and I on the Loose at 12:00 AM