One day as I was riding around on Gracie I came upon a woman supervising her cat who was wandering around sniffing everything.  I stopped, got off Gracie and approached them as both who understandably were a bit guarded. I introduced myself adding "I'm a cat guy.  I just had to stop and see your kitty."  The lady relaxed and the cat wandered away.  I then saw another cat and she informed me there was a third one around somewhere.  The other two cats weren't interested in me, but Jasper was and cautiously approached me, checked me out and then turned away and continued his exploring.
She then told me about Jasper. 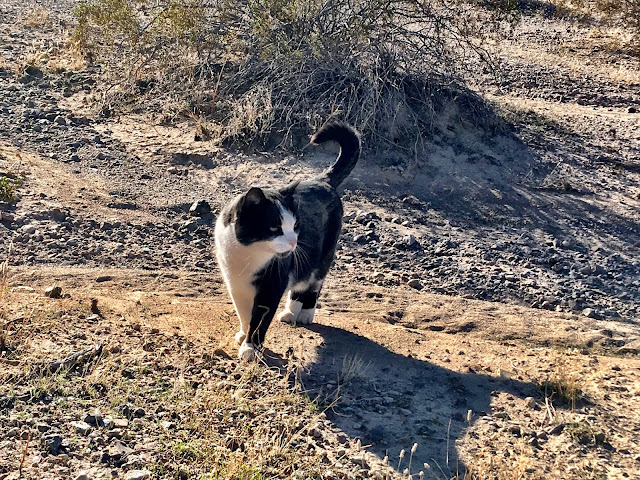 Be forewarned...this is very BAD!

In his first year of his life he was raised to be "bait" for pit bull training.  People (I shouldn't call them people for they a below such) take young cats and throw them to pit bull dogs where they are savagely torn to bits as a training tool.  I never heard of such and thing and wish I never had. Oh what I would give to just have a few minutes with this type of individual in a world without consequences.  Jasper was lucky in the fact that he escaped this horrific fate.  He was eventually rescued and the lady adopted him.  She already had the other two cats Sasha and I don't remember the name of the other.  When Jasper was introduced to the family he was extremely aggressive to the other cats and his new Mom.  There was hissing, scratching, biting and blood.  You can't blame him one bit.  People, including her vet said he was hopeless but she didn't give up on him.
Today Jasper is six years old and he is a cuddlier and a lover. 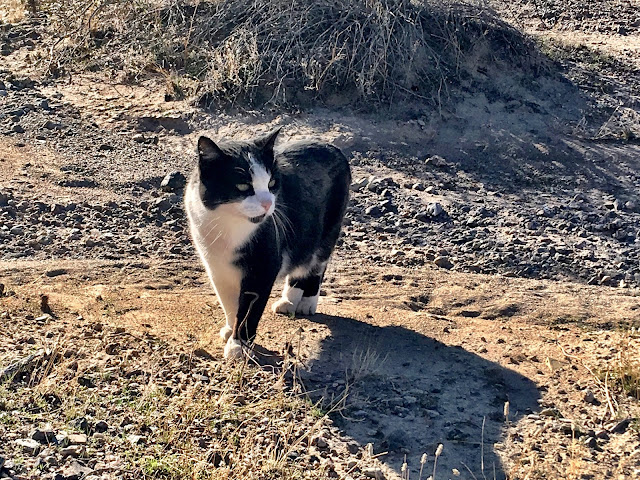 Jasper walked back to me and allowed me to pet him, then wandered off again.  The woman was surprised he did this  As we talked Jasper came back a third time and gave me a couple head butts on the leg then rubbed up against me.  She was astonished at this behavior from him.
What can I say?  Cats like me. 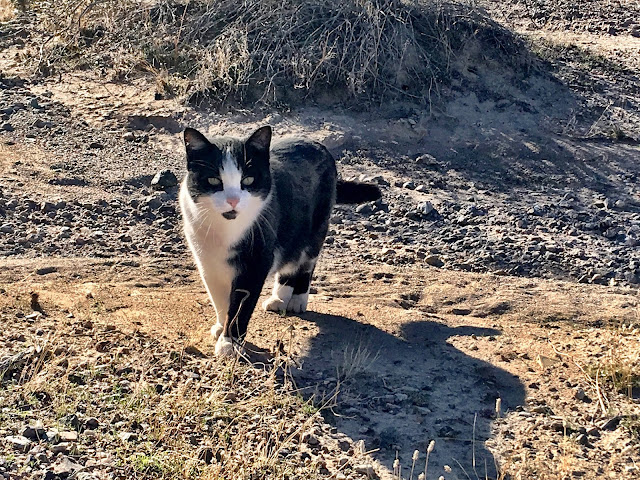 The woman, I think her name was Alicia, was very concerned about coyotes for she could hear them at times.  I tried to reassure her that there wasn't any need to be concerned for she was out there watching over her cats and the coyotes never come around during the daytime with so many people about.  Nighttime yes for people leave food for their pets outside or even people food at times.  As I rode away I thought about the fact that rattlesnakes would be a bigger concern than coyotes.  I wished I had told her this.  It is winter and very cold so all the snakes are hibernating now so there is no need to worry.  If she is reading this and ever plans to come back to the desert areas (she was from the midwest) just be more watchful for snakes in the warmer months than coyotes.