It is so ding dang cold outside that Beans and I are confined indoors most of the time.  As I write this the wind is blowing twenty miles per hour.  Who wants to be out in that?  Yesterday was cloudy and cold.  The day before, raining.  Anyway, this gives me a lot of time to think which leads on to a project.  This post will be the first of a couple project posts

This is a motion detector security light I bought here in Quartzsite three years ago.  It has a small solar panel that charges two small batteries which powers the light during the night.  It worked great for a year then the motion detector quit detecting motion.  I took the light down and have been carrying it around ever since.  Being cooped up inside I got to thinking.  The solar panel brought in 13 volts.  The batteries put out 7.8 volts.  I took the light apart and hooked up a 9 volt battery.  What could 1.2 extra volts do?  Nothing.  It didn't catch fire or blow up.  (I knew it wouldn't)  I reinstalled the light high along the roof line pointing to the rear and ran wire down along the ladder and inside the RV.  With the solar panel no wiring was needed but I couldn't use the solar part anymore nor the batteries as I needed to be able to switch on the light manually. 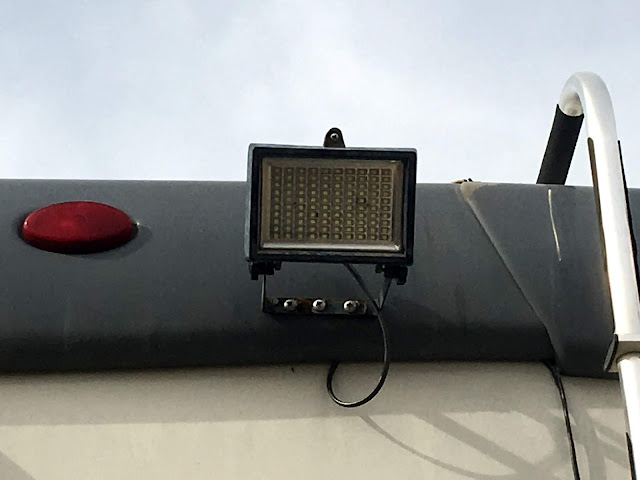 To do that I picked up a small transistor radio at the local Animal Shelter Thrift Shop for $3.  I took the radio apart and figured where to connect the wires inside.  Turning on the radio makes the light go on.  The radio is mounted next to my head at the bed.  Now if I hear anything outside, I can flick on the radio and see what is going on.  This will be especially nice when over-nighting at places like Walmart parking lots.  You may wonder "Why not just get a new security light?"  That'd be too easy.  Where's the fun in that?  Besides, that Chinese junk doesn't last long. 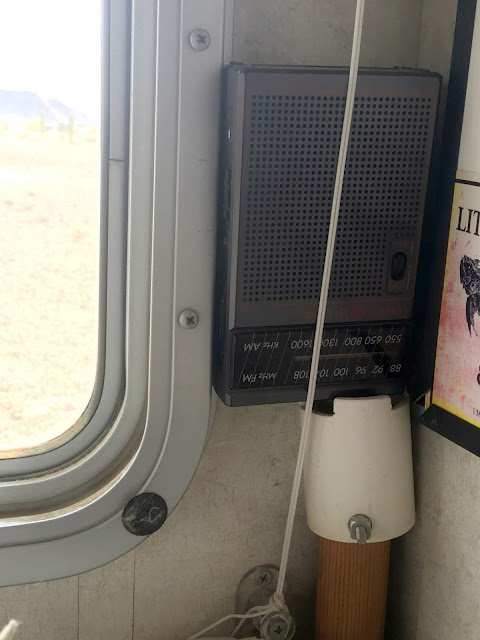