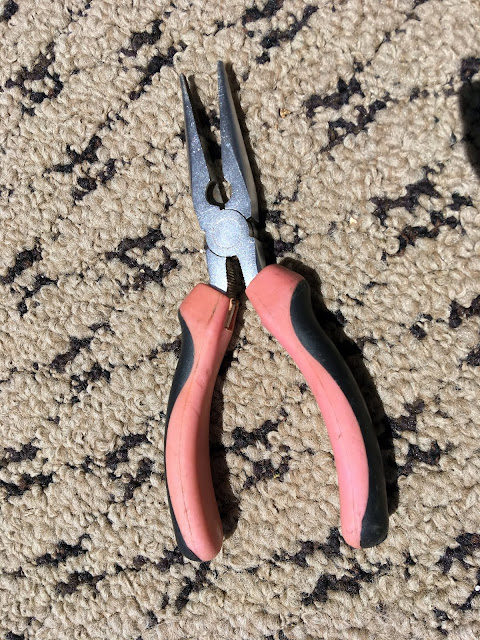 Nearby the dirt bag camp behind us I had found a pair of pliers in the dirt while Beans took me for a walk.  They were stuck shut.  No amount of effort would open them.  Not that I needed another pair of pliers but I liked the challenge to see if I could get them working once again.  I slipped off the rubber handles and started working on them spraying some oil on the hinge and letting it set.  Later, they still wouldn't budge.  I ended up having to pound a big screwdriver in to wedge the jaws apart a little bit.  Then I forced a tire iron in there to widen the gap more.  Still I couldn't work the handles one way or the other by hand.  It took slipping two foot long pipes over the handles for extra leverage and only then I was just barely able to get the pliers to move.  I kept working at it adding more oil and letting them set.  In the end much to my amazement I was able to get the handles to work freely just as they once did when new.  I finished cleaning the up, glued the rubber handles back in place and I now have a pair of needle nose pliers that are probably better than what I already had.
Best of all there is no MADE IN CHINA markings on them.
And this folks is how I spend my time in camps.
Posted by John @ Beans and I on the Loose at 12:00 AM