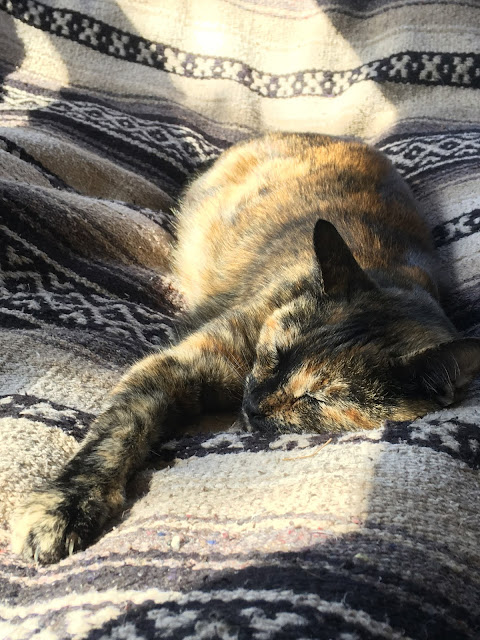 This occurred two months ago.  I only now can now write about it.


One early evening sitting outside I heard Beans playing with something under the RV.  She had a baby mouse.  The next morning she had another baby mouse under the RV.  Where was she finding them?  Then I saw a baby mouse fall down from the front bumper.  The nest must be up under there somewhere.  Beans was occupied with the baby mouse and a lizard she had caught earlier.  I was occupied in looking under the front of the RV.  I couldn’t locate the nest and crawled out from underneath.  Beans was gone!  I looked everywhere.  I even got up on top of the RV hoping I could see her dragging the white cord from her harness in the brush.  Nothing.  I tromped around for what seemed nearly a half an hour looking and calling.  I was just sick.  Finally I stumbled upon her far behind camp.  The cord had got wrapped around a bush (obviously chasing a chipmunk) and she was stuck, just hunkered down covered in fox tails.  Let me tell you we both were so happy to have found each other.  I unhooked the cord and would come back for it later.  I hugged her and held her close.  She “talked to me”  the whole way back to the RV.  She was so happy I found her.  I cleaned her up and fed her.  She spent the next fifteen minutes or so just being near me reaching out with her paw to touch me, making sure I was there.  We were both worn out for the rest of the day from the trauma of the event.  She never darts away and will always stay near but it only takes one chipmunk and she is gone in a flash.  That night I laid in bed thinking what if she was still out there stuck somewhere?  If she didn't have on her harness with the long cord attached she would have come home.
The thought of being tangled up still horrified me and I struggled to get it out of my mind.
I learned a very big lesson that day.

Aw-w,so wonderful that you found her! I once could not find my cat for two days so understand the feelings, both during and after being gratefully reunited.-Mary

Phew, that was a close call.... I am so glad Beans was OK, and you found her. It's really hard to get something like that out of your mind. Now that you have written about the trauma, it won't bother you so much.