Burning Man is a huge art festival held every year at the Black Rock the last week of August into the first week of September.  I discovered it by accident in 1995 while out on the playa for a Labor Day weekend.  Then there were about three thousand people in attendance.  I went every year afterwards up to 2010 when I quit going for it became too big with over 70,000 people.  This year the event was canceled due to COVID-19.  The website warned people to not go out there as law enforcement would monitor the situation.  We arrived a week after it would normally have ended.


One day I rode Gracie the six miles over to where Black Rock City would have stood.  I wasn't surprised to find several camps there.  I talked with some of the people and learned that during THE week there was an estimated over a thousand people that showed up.  And the Sheriff's and Bureau of Land Management Rangers showed up also, but were real nice, told everyone just to be safe and leave the place clean.  I thought that was cool.  Now I was surprised to find one big art project had been brought out.  This is no small feat. These folks have to rent huge truck and trailers and fork lifts or cranes and bring them all the way out here to set up their art creations.  If you are interested in seeing more just Google Burning Man images and you will be amazed at what you see.  In regular times close to hundred art creations will be at the event ranging from small projects to huge massive wood art pieces and buildings which will be burned at the end of the festival.  In case you are wondering everything is cleaned up to a 'Leave No Trace' standard and a month later you wouldn't know a city of 70,000 people once stood there. 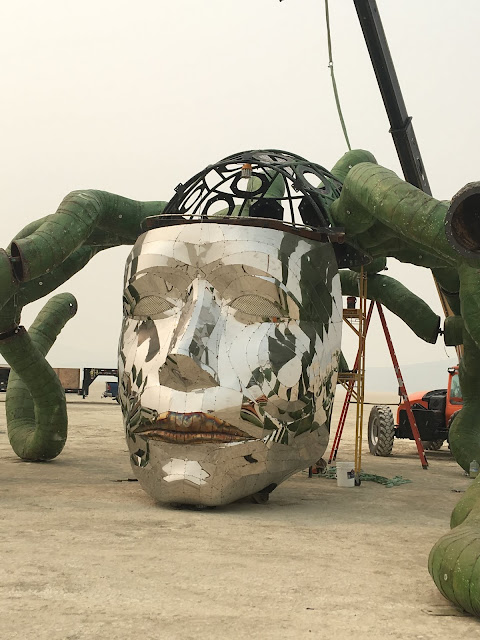 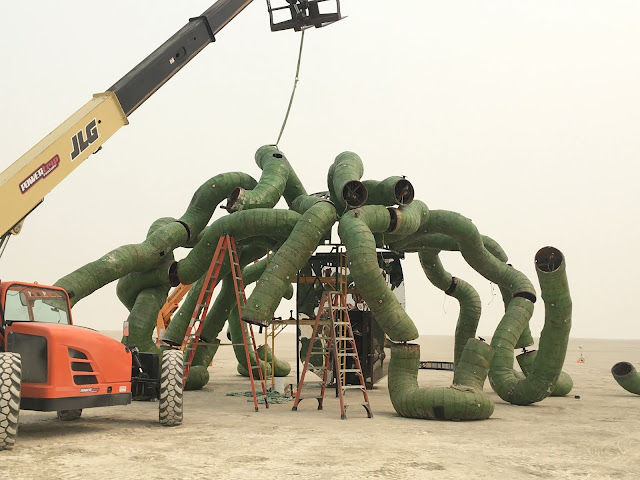 Huge art installation in the desert, and then they take it down and take it home? Amazing!

I've always thought that it would be cool to go but not with 70,000 people. You were lucky to go in the old days.

Reminds me of Toy story that sculpture