Smoke Gets In Your Eyes

When we arrived onto the playa the skies were clear.  The next day the wildfire smoke drifted in from the west.  I could no longer see the mountains encircling the dry lake we were camped on.  Two days after we left Sisters I received a “severe air quality” alert for Sisters.  Even as we left I was already seeing an orange moon at night and a filtered sun during the day.  I was able to look directly at the sun.  Later after receiving that alert I learned that Oregon had followed the cue from California and all National Forests were closed.  I wondered if anyone would drive through where we were at Camp Hunker Down looking for those I knew who were camped deep into the forest.

Below is a screenshot of an article describing the smoke drifting all the way east to Michigan.
Sisters is about where the X is.  We currently are where the O is.  My plan when we leave The Black Rock will be driving down the through Nevada just to the right of the red line. 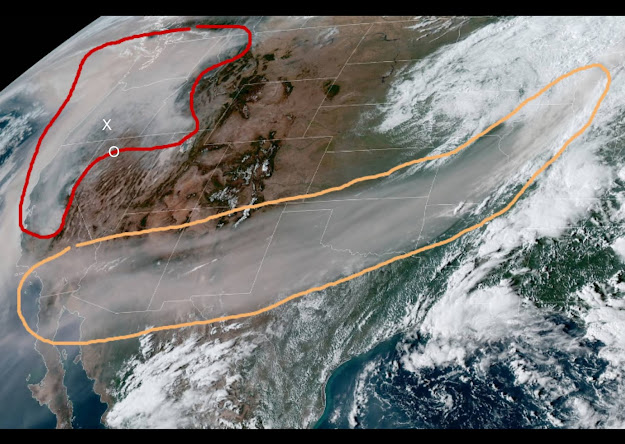 Update:  Conditions have become worse, still nothing like what others to the west are dealing with.  Still my plan to drive south would take us right into a travelers advisory area of Nevada where visibility is reduced to less than a mile.  Hopefully later this week there will be a wind shift.
Monday was the worst with watery burning eyes and irritated breathing.
Nowhere to go for anything better.

Take care and hopefully you will get out of the area

Stay safe! Can't you head a bit more east? Or is it colder there?

Let's hope that wind blows it all away. Seems like every couple of years the "new normal" gets a lot more ugly.

That smoke is covering a huge area, it seems there's nowhere to go to get away from it.