The Little House on the Highway 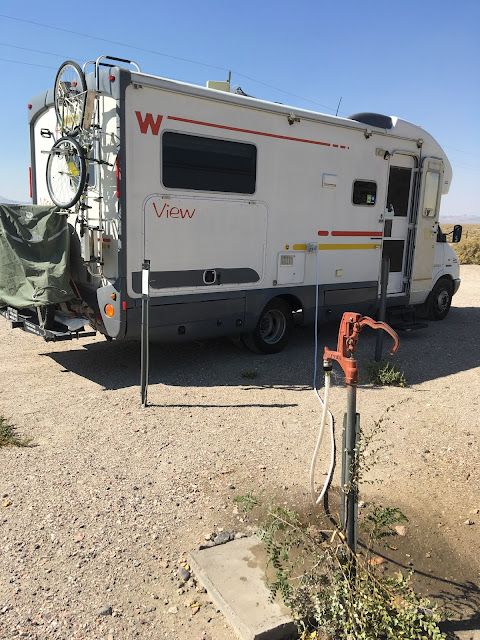 At the time I had a 1976 Winnebago Brave.  It was funky and fun but I was looking at taking longer trips now and wanted something easier to drive with some modern features.  On this day I was planning to drive to a nearby town to look at a BT Cruiser RV a private party had for sale.  That Friday morning before leaving the house I checked Craigslist again and saw a used 2006 Winnebago View for sale at a dealer's lot along the way.  I had never seen a used View for sale before. This was back in 2007 remember.  I thought I would just stop by and look at it, torture myself, and then continue on to see the BT Cruiser.  Now I had seen the new Winnebago Views at an RV show the year before when they first came out.  I was really impressed with the design and quality but knew I would never be able to afford one of these motor homes.

I stopped at the lot and there she stood along the fence.  A salesman wearing a Hawaiian shirt walked over to greet me.  Being he had just returned from vacation he wasn’t familiar with the RV.  He went to get the keys.  “This just came in yesterday.”  He opened the door and I was amazed at how nice and clean it was and even smelled new.  I mentioned this to him.  He said that they hadn’t even detailed it yet.  “This is how it was when we got it.  The previous owner traded it in on the new 2007 model.”

The View sets on a Dodge Sprinter chassis with a Mercedes Benz diesel engine and drive line.  I asked the guy to start it up.  I was expecting the loud obnoxious diesel sound of the pickup trucks I saw all the time.  I was surprised.  It was quiet and smooth running.  I walked around to the exhaust expecting to see it belch black smoke from the pipe.  I saw nothing, I smelled nothing.  Now I was really interested.  They had it priced at nearly $20,000 less than the new sticker price. The salesman said “This wont last through the weekend.  One guy is coming by this afternoon when he gets off work.”  I knew he was right.  I would never have an opportunity like this again.  After the test drive I decided to buy it.

What I feel happened here was this was probably one of the first used Views anywhere to be offered up for sale and they just didn't know the potential resale value of them.  Years later I kept looking and the price I paid was still showing up on 2006 Views five years later and beyond.  I have people asking every once in awhile how do I like my View.  I always find myself saying “It is the best investment I have ever made.”  Aside from owner/operator error I have never had a problem with The Little House on the Highway.

Happy Birthday to your Little House, that was the best investment you have ever made. And I bet it hasn't cost you much in repairs over the last thirteen years. Is diesel fuel easy to find everywhere? And cheaper than gas or more expensive?

That is the funny thing about this and I had forgotten about it until you brought it up. Historically diesel was always cheaper than gasoline so I was happy about being a diesel owner at the time. And just then diesel fuel prices jumped ahead of gasoline and have remained there ever since!!