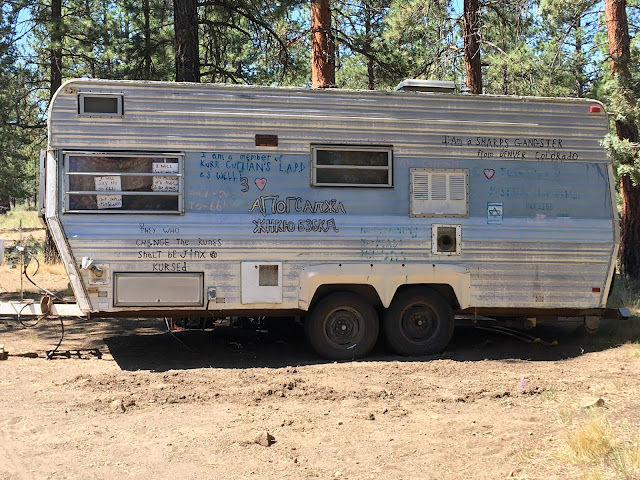 This trailer was sitting in the forest for as long as we were at Sisters.  It was there when we arrived on June 1.  I would pass by it every time I went into town on the motorbike.  There was never any vehicle to tow it with.  Only a bicycle.  One day I saw the owner of the bicycle.  He had long greasy hair and wasn't all there upstairs.  There was some definite mental issue with him so I always kept my distance.  Everything he needed he did so on his bicycle and he had to peddle two or three miles into town for supplies.  I wondered how he got the trailer there and did he leave before winter set in?
When we left conditions were getting bad with the fires and smoke.  Two days later all the National Forests in Oregon were closed.  A day after that I received a severe air quality alert for Sisters.
I wondered about this guy and how he survived and what became of his trailer when told to leave.

I hope he's OK, but everything points to someone in need of help. It reminds me of a Mr Rooke who lived near me at one time; he painted weird notices and erected them outside his gate, then used to come out and swear at anyone who stopped to read them, claiming they were harassing him. I often wonder what happened to him.

Always haunting having to leave those questionmarks behind. I still think of that girl you told of a few years back that went up the road, but didn't seem to come back. Been away for quite awhile, John...so it's taking me awhile to catch up. So happy you and Beans are still enjoying the desert. :)

Welcome back Karen. I was just telling a friend about that story the other day. It is still a wonder to me. Right now I am dealing with the homeless guy with the tricycle and trailer I showed the other day. He is sitting far out in the desert now, no shade, no breeze and it is over 90 degrees hot!