Burger King vs Jack in the Box

We stopped in Parker on our way to Quartzsite to pick up a few last items at Walmart.  When done I told Tracy I had to eat before we continued on down the road.  She needed to eat too.  It was hot and I really wanted a milkshake.  I told her I was going to stop at the Burger King a half mile down the road.  Tracy doesn’t eat crap food and would fix her on lunch.   “I’ll meet you there” she said.

At Burger King the side doors were chained shut.  I could see someone waving me around front.  At the front a kid stuck his head bout the door and told me to go around to the drive-up window.  Good grief.  At the window (no cars in the drive thru) I told him I wanted a Whopper and a chocolate milkshake.  “We don’t have any milkshakes” he says.  “Man, I really wanted a milkshake.  That’s why I came here” I asked why they didn’t have any.  Evidently the trucks hadn’t delivered any product.  “I’ve had ten people leave today because of no milkshakes.” he said.  “Tell you what, I’ll give you two Whoppers for $5.” I can’t eat two of them!  Oh well, I could eat one later for dinner.  “Okay, go ahead.”  He rings it up.  "I only charged you $3.60.”  He had given me the old person’s discount.  Okay that made me feel better. 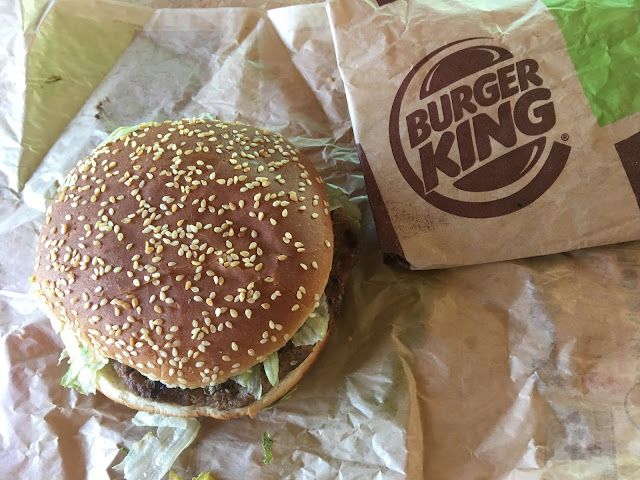