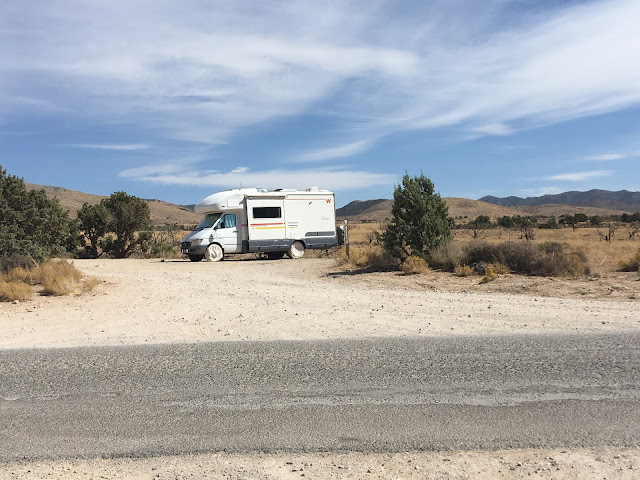 The next morning we continued on south taking a turn towards Pahrump, Nevada.  This route we would avoid most of Las Vegas later on as we make our way to Arizona.  I topped off the fuel tank in town thus avoiding having to get fuel in Las Vegas. The grocery store was nearby and I picked up a few items and then had lunch at the next door Dairy Queen.  I only did it for I saw they made Orange Julius drinks and it has been years since I last had one.  It was so-so.  They used to be much better.  On to our next camp.  Three miles off the main highway on a paved road brought us to the camp area.  I parked and got out to walk the dirt road down and check out the camping prospects.  It was a rough road and I wasn't up for the adventure so I decided where I was parked was good enough.  Later it seemed the best choice.  Being at 5000 feet (1524 meters) the air was cool, a nice breeze blew up the canyon and there was a wonderful view.  In the camp area there was no view except juniper trees and no real breeze.  This may be it for awhile for Arizona is still way too hot for the next couple of weeks.

That looks like a good place to park for a while. Lovely big sky. And will there be any lizards to keep Beans busy? Love the name Pahrump.