Me and the News Update

You may recall back when the inauguration was gearing up I became very annoyed with my iPhone and iPad dinging repeatedly with the latest news bulletins of the affair and I finally fully detached myself from all news having discovered I had control over my notifications.

My life has been so much better ever since and continues to be so.

Thomas Jefferson said the job of journalists was to portray accurately what was happening in society.  The media over time increasingly failed to report positive news.  In the 1990’s while homicide rates in the U.S. dropped by 42 percent, television news coverage of murders surged more than 700 percent according to the Center for Media and Public affairs.

If you are old enough then you will be familiar with The Huntley-Brinkley Report news program on NBC which aired from 1956 through to 1970.  Chet Huntley reported from New York City and David Brinkley from Washington D.C.  Both men had the deepest respect for each other even though one was a firm Democrat and the other a Republican.  Few people ever knew this for their political differences were never apparent in their reporting.  This type of professional journalism is nonexistent today. 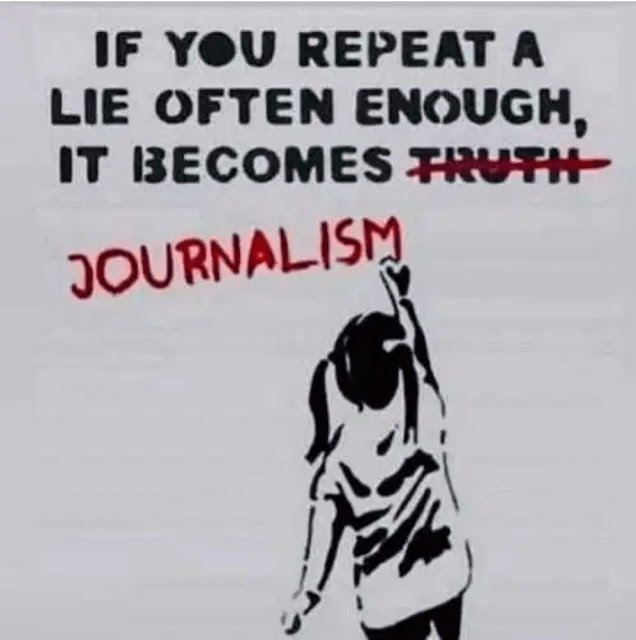 I've had suspicions about journalists since I was a young boy and helped out on the farm. The foreman's brother was a young professional cricketer, just making his way in the game. During one winter he came and helped on the farm, even though he knew nothing about farming. It so happened that a journalist tracked him down there for an interview. For years afterwards he was described in the papers as "the Cambridgeshire pig-farmer", this in spite of the fact that he played cricket for at least 6 days a week during the summer and, after that winter when he was on the farm, played the game in Australia, India and other places for the rest of the year. How on earth could he still be a farmer!
I was amused however by a headline in a local newspaper from Scotland after your recent election "Local Golf-Course Owner Fails In Election Bid".

Journalism isn't as good as we'd like it to be, and when I have time I like to tell them when I think something's too slanted or is missing an important point. I was a reporter for a few years in the '80s and still have a soft spot for the job. Our paper was one of three nearby dailies, and sometimes I'd shake my head in wonder at the different perspectives we brought to the same event.

I have mixed feelings about the news...sometimes reading things on line, sometimes watching the evening TV news broadcasts. Now that there aren't daily histrionics of a president, it's a bit more palatable. But I also think the blogs and social media in general often give me views that seem as good as Walter Cronkite did...though often biased as well. There's a thing I learned about a few years ago, that social media's use of algorithms means I've only seen what my "tribe" puts out..so I don't really know the rest of the people's opinions. I really am fine with that actually! Well, until they storm the capitol, that is.

I remember. Sure do miss those days. I too have turned it off and read what I read. I try to read both sides so I can get some sort of perspective of what the truth may be. Damn hard most times, tho.