The last thing I had to do on errand day was fill up the water tank on the way back to camp at the only water source which is at the camp area across the highway from our camp area.  There are four stations and each has two spigots of free water, one of the perks of paying the seasonal fee for staying at any of the four long term areas.  I pulled up to one station where the lady in front of me was finishing up filling her six five-gallon water jugs and hefting them into the back of her small SUV.  I wished I had taken a photo of her but had no idea at the time that this simple act of getting water would evolve into a blog post.  Next to her where that black SUV is was a guy in a jeep with two little dogs yapping away constantly at the woman.  Now I have tinnitus (ringing in the ears) and the high pitched sound of small yapping dogs is not just annoying but outright painful to me.  The guy made no effort to shut his dogs up.  The woman couldn’t load up her water fast enough.  I thought I can’t deal with that barking and was considering moving then noticed the guy coiling up his hose.  Good, he’s going too.  Both left and I pulled forward when the guy in that black car pulled next to me.  He too had an ankle biter that was all hair, teeth and eyeballs going berserko yapping at me from the open driver’s window.  The owner was completely oblivious to it.  I looked across the way and saw the other faucets were clear and moved over there, my ears ringing painfully. 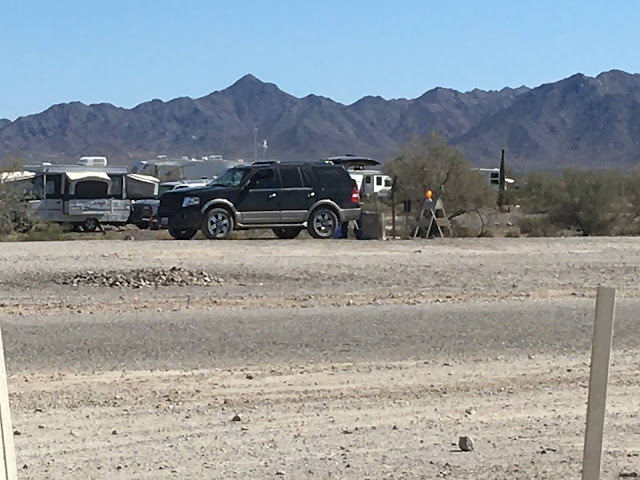 I had just got my hose inserted and turned on the water when this guy pulled in.  I am not exaggerating one bit, I could smell him before I saw him.  That motorhome reeked of cigarette smoke.  It was as if it were a rolling ashtray.  I couldn’t believe the stench I was capable of smelling standing outside as the breeze was blowing it in the direction this photo.  I stood back here for the fresh air until the water tank was full.  The guy walked out and came around behind his rig to hook up his hose and he looked every bit the hardcore smoker - a small skinny guy with shriveled up leathery yellowed skin and rheumy looking eyes.  Neither of us greeted each other.  At least he didn’t have a yapping dog. 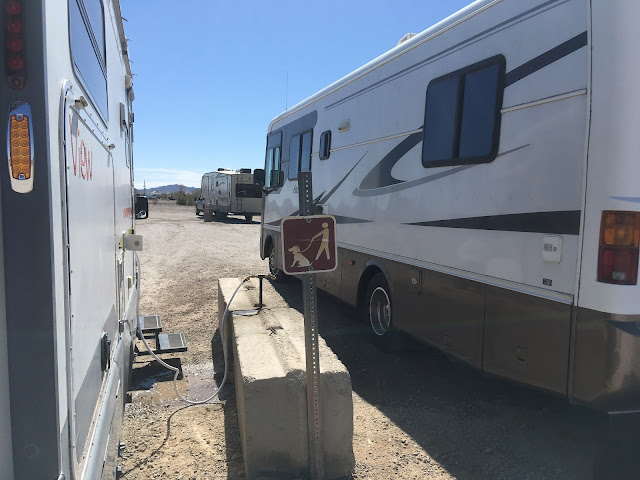 That sign should have a picture of a dog with a muzzle on.
Posted by John @ Beans and I on the Loose at 12:00 AM