I went into town one day having to take The Little House on the Highway as I was going to pick up two large packages of cat food I had ordered.  $210 worth.  Beans eats better than I.  So having our house with me I did some “major” grocery shopping while at it.  I came out of one small grocery store and this was parked outside.  I had to stop and visit. 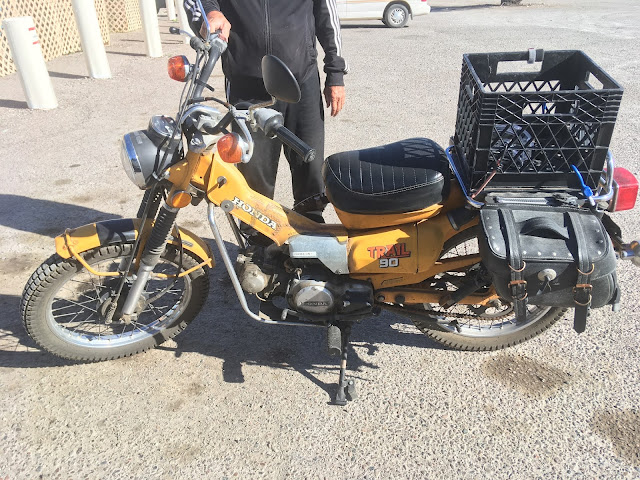 This is a 1978 Honda Trail 90.  Mine is a 1972.  This poor bike was so beat up I thought it was older than my bike.  One factor should have tipped me off was that it has turn signals while mine does not.  In ‘73 they added turn indicators.  He was a nice old guy to talk with, unfortunately we didn’t exchange names.  He was 84 years old and still riding his scooter around doing errands on it just like I do.  I told him how much I enjoyed meeting people like him who inspires me.  He was leaving the next day to return home in Nevada.  He said he thought he would get the vaccine when he returned.  Said his son had caught COVID and had a rough go of it.  His son is nineteen years younger - 65.