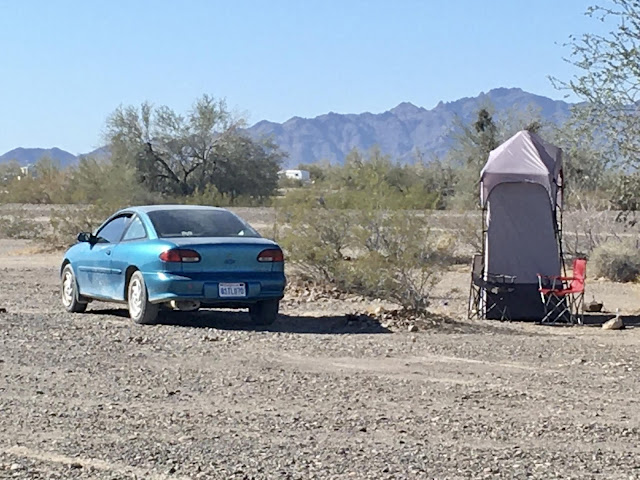 You may recall this time last year I had that dizzy nauseated problem at times and thought I was having a sugar issue so I cleaned out all my crap food giving it away.  I later learned that I was suffering from the blue light syndrome of being in front of my laptop too much as that was the only time I got dizzy and nauseated.  But hey, I improved my eating habits so that was a win.  Anyway, I tried to pawn off my applesauce onto a woman living out of her beat up little blue car.  She declined the applesauce stating that she too had to be careful about sugars and sent me on my way with a “don’t worry, you’ll be fine” comment.  She is here again this year and has added a small little shower tent to her kit.  Catching her outside one day during my walk I stopped by to say hello.  She remembered me and we had a nice time visiting more in length this time.  She said she purchased the shower tent to keep some things in and give her a place to be in other than sitting inside her car all the time  “I can sit and stand up in the little tent.”  She added that she is thinking of buying a canvas clam shell style tent and to look for it next year.

You may also recall how with this new Wuhan virus thing coming on last year and everyone being told to stay in place, self-quarantine and remain in lock down we here at Quartzite didn’t know if we would be booted out after the April 15 deadline of our paid for stay period.  Well that became not a problem and Beans and I stayed a couple more weeks beyond that date and then finally it just got too hot so we left.  Joy told me she made it well into June! And that is with no shade of any kind.  Wow!  She then left for the New York area where one of her daughters lives, she herself being from Ohio.  Along the way she contracted COVID.  Although her daughter wanted her to go to the hospital she refused, thinking that would be a death warrant in itself.  I couldn’t agree more.  Joy got through the virus just fine but still gets wheezy at times she said.  “No big deal if you are healthy and eat right.”  She then drove cross country to her other daughter’s place in Los Angeles which is on record as her place of residency, where her mail is delivered and her car registered.  She stayed there until it was time to return to Quartzsite this past October.

Besides the car being worn looking, filthy dirty from being in the desert (much like Beans) when she drives by I can hear all sorts of rattling, clanging and banging.  What an adventurous little woman (she’s barely five feet tall) driving that rattletrap little blue Chevy back and forth across the country.