Clinton, Arkansas
Named after DeWitt Clinton who built the Eire Canal and who became Governor of New York in 1817.
Why someone in Arkansas wanted to name their town after him, I don’t know.
Anyway, our last night in Pine Bluff was eventful as you can see from the lightening strikes. 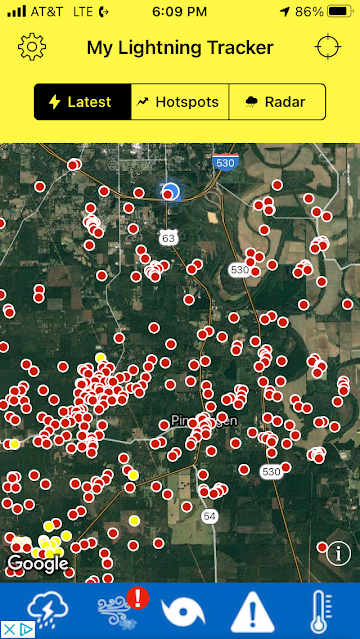 We continued northward through Little Rock and beyond with rain most every mile.  By lunch time when we arrived in Clinton we had had enough and it wasn’t raining there.  I think we have left the dreadful humidity behind.  Now if only we can dry out.
On February 5, 2008 an EF4 tornado ripped through Clinton killing three people and destroying many homes.  We’re not hanging around.
I mark on paper maps all the roads I have traveled over the years and we are beginning to come across many of those roads again.  Its hard to find new untraveled routes but hey, its not like I can remember them anyway so why let it bother me?  I’m not.  I still enjoy the scenery.  It is like new to me.  Also I am not trying to find places to stay like normal campgrounds until we can get out from all this wet.
Posted by John @ Beans and I on the Loose at 10:00 PM