Just across the Kansas/Nebraska border lies Falls City.  They had a city park one could camp at.

This is why I came.  It had a shower!

Oh it was so nice. 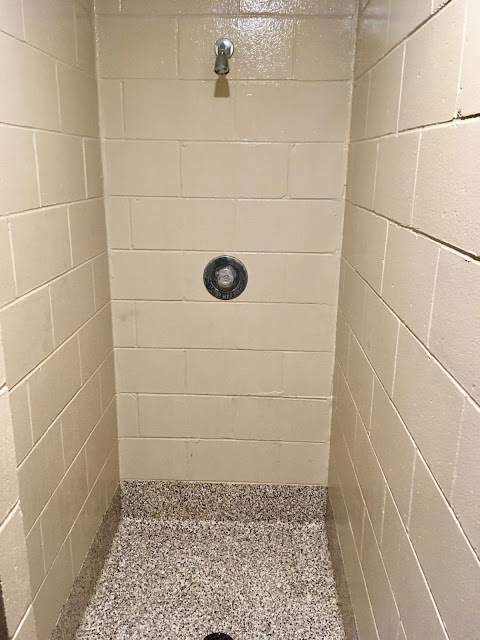 After my refreshing bath I ate my Subway sandwich I picked up in town made by two grumpy women.

“This place is nice.”  I decided to stay. 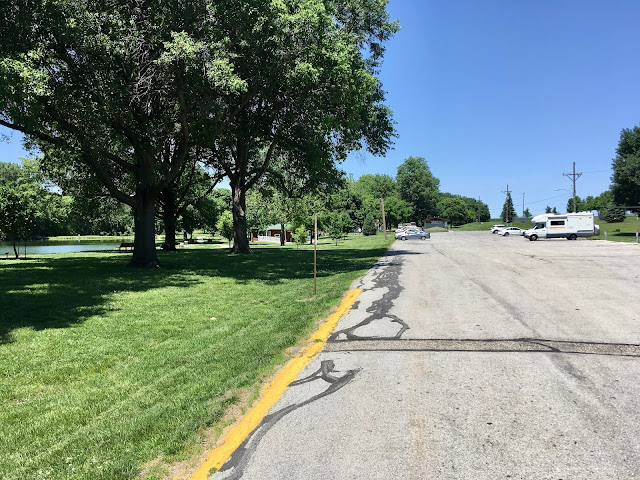 I have stayed at dozens of city park campgrounds all over the country.
This one moved to the top of my list, best of show.
Being as I don’t need hookups I could use the parking only rate. 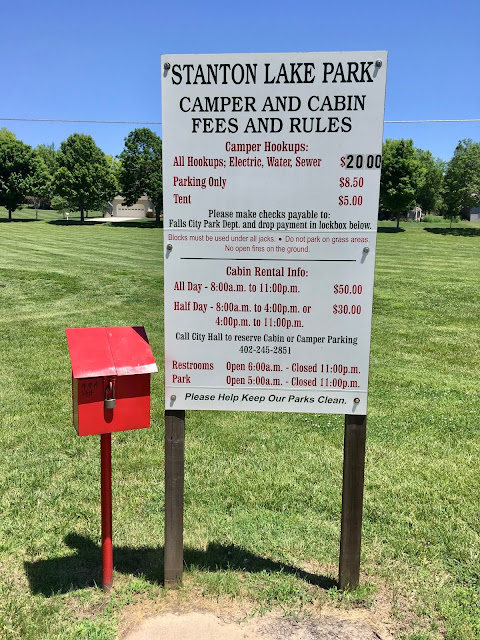 Look at that view.
Just on the other side of the lake are train tracks.  The trains roll through slowly and with no horn blowing. That evening I laid in bed listening to the train pass by and found it a comforting sound.
Boy, I never thought I’d be writing those words. 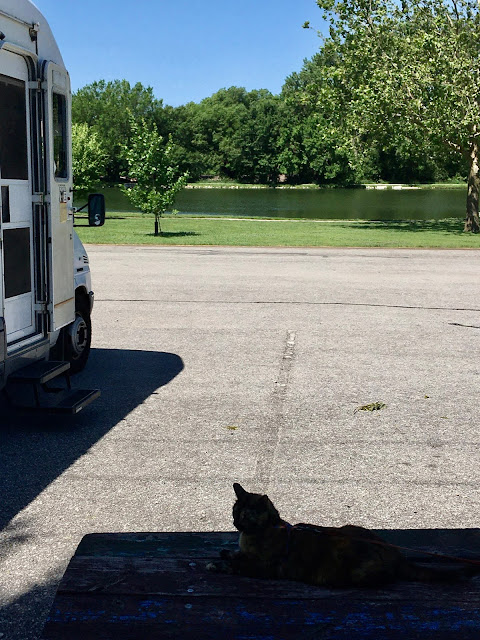 There was only one other camper there.  Some people would come to walk around the lake or fish.
That was about all there was going on.  I decided to stay a second day. 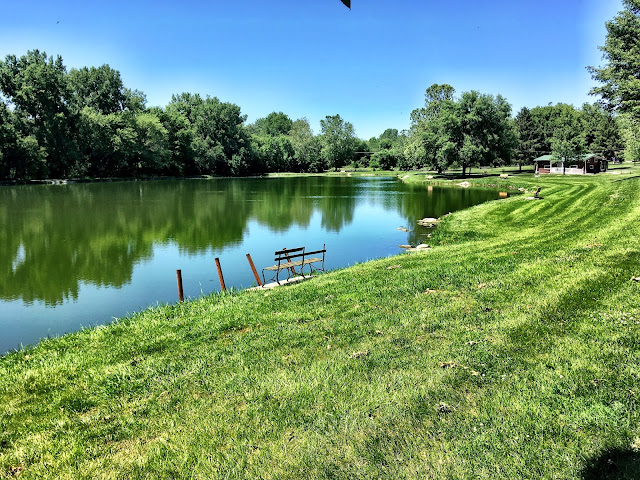 That day the other camper left so I moved over to where he was to get away from the gender reveal party that was setting up in the activities cabin, just in case they blew the place up.
Sitting there in the picnic shelter I wished I had something to drink.  So I left Beans on the table secured, and went over to the RV and back.  She stayed put.  She’s such a good girl.  Just then after my first sip of lemonade a train rolled through and at the same time the party set off a minor firework.
Beans freaked.
I took her back home.
Okay, that wasn’t a very smart move on my part.
Oh, it’s a girl in case you were wondering. 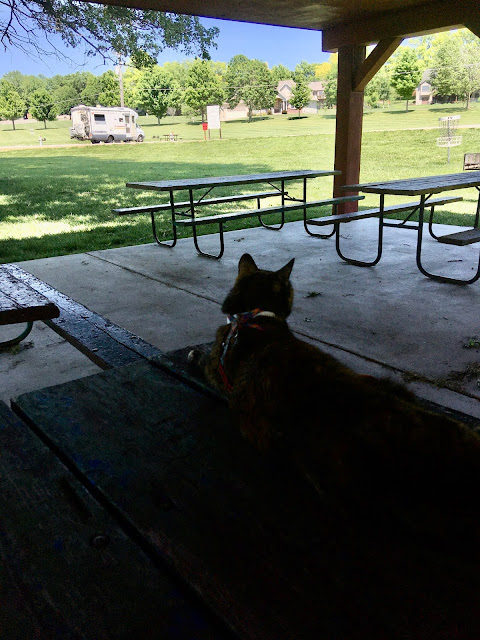 Over in the dog exercise area I discovered some more damage from that storm. 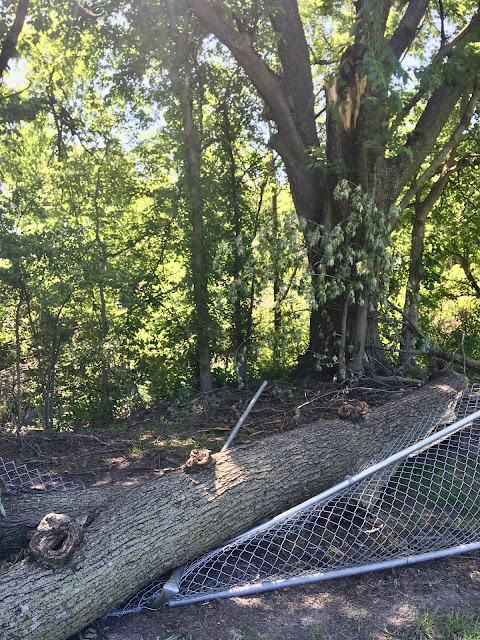 In case any of you are fishermen or women and were curious. 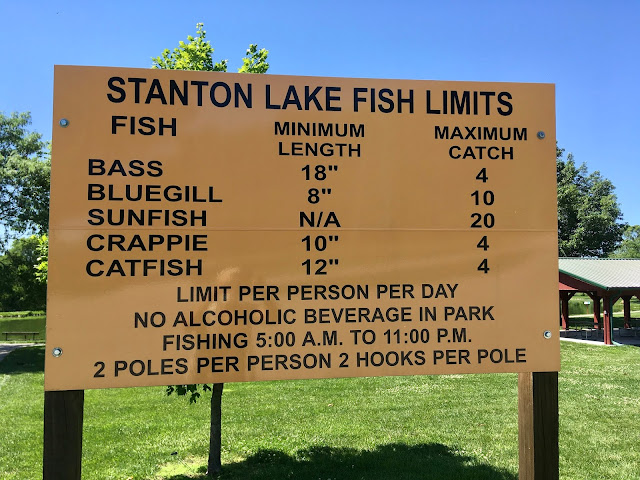 Oops!  My lemonade was a Mike’s Hard Lemonade.
I was over there to the right behind the sign.
I didn’t know...really.

What a lovely spot, minus the fireworks, but it does look nice. How hot is it I wonder, in the sun? That might be the only drawback but if it's below 80 I dare say it's livable! Hi Beans.

It is warm and getting more so everyday. In a few days it will be in the high 90’s, everywhere. The key is to be in shade and we will be okay. Supposed to cool down this weekend. We can deal with this, just not that humidity.

This looks like a nice place to stay for a couple of days, and a real shower is very welcome I am sure. Watch out for the really hot weather, it is forecast for a large part of the USA for the next 4 or 5 days.
Those gender reveal parties are a new "thing".... my D-I-L's pregnant sister is planning one. Fingers crossed that they don't set the house on fire.