A lot of loud talking was going on outside while I was trying to rest.  When the police showed up I had to get up and see what was going on. 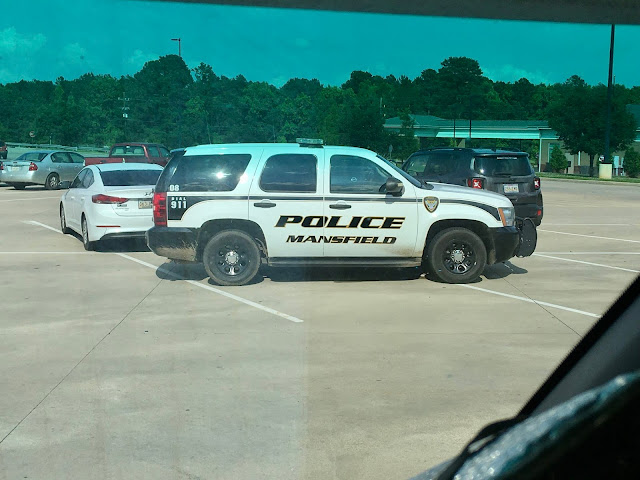 It seems these two guys saw a snake slither in up under this car.
That is the cop investigating the prowler. 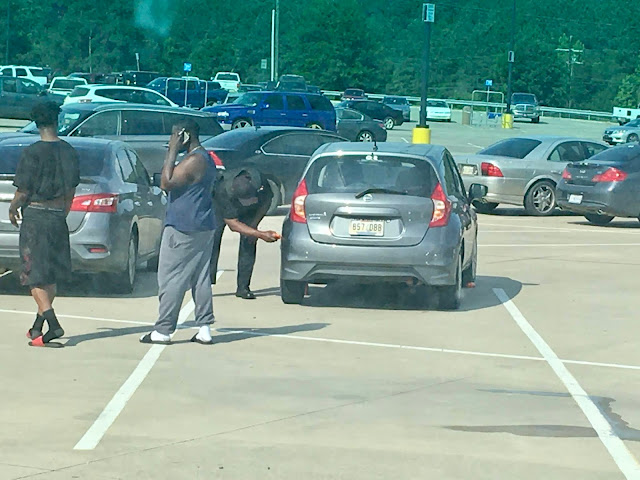 First they sprayed WD-40 into where the snake went in at the right rear wheel.  A lot of poking and banging with tools and then a big stick ensued.  The two guys  went into the store and came back with a four-pack of Raid insect fogger cans.  The three of them set off the foggers waving them all around under the car.  Then a large can of Raid ant spray came into play.  A lot more poking and beating on the car and gas tank continued.  The guy in the white shirt drove buy and offered up his garden pump sprayer filled with weed killer.  That’s what is going on here. 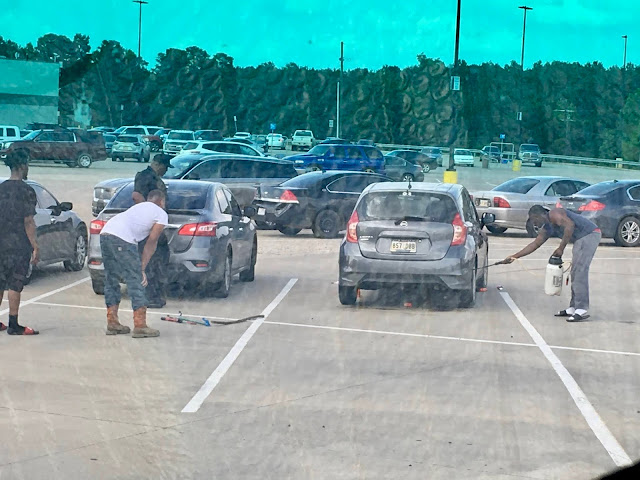 Back-up was called in; two more police officers arrived.  More stick action followed even by the two new officers as if they will succeed where everyone else failed.
This poor car took a beating let me tell you. 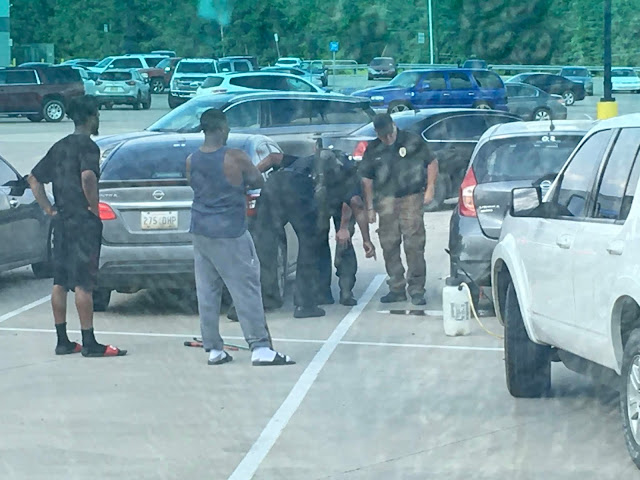 After two hours of this nonsense the cops retreated leaving just the two guys unsupervised.  Their buddy came by and passed them a can of gasoline and one of them goes around pouring gas on all four wheels.  Okay, now I am getting ready to make a fast exit for the two dudes have been smoking cigarettes off and on the entire time.  With that done they leave a note on the windshield and go on their merry way. 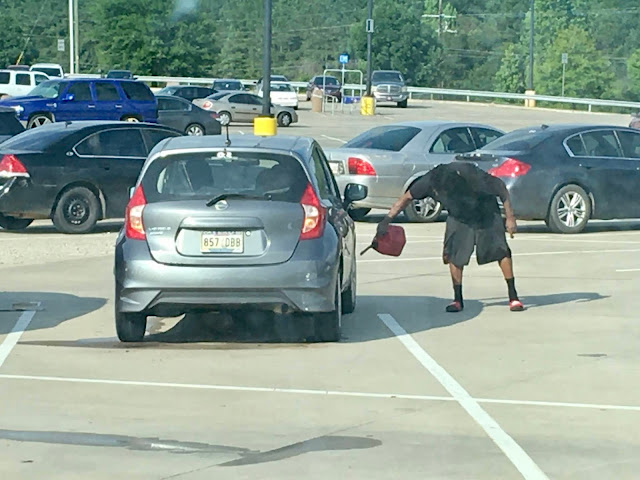 The end of the story.  A tour bus stops by later and lets off a bunch of folk who must have just took part in a casino tour of the area.  The car belongs to one of the bingo players.  Gasoline man just happens by and informs them of the day’s happenings...in great detail.  All the gamblers stand around at a safe distance looking and listening.  The two ladies who came in the car want nothing to do with it.  The bus driver gets in and takes the car for a spin in the parking lot.  Gas man gives the two ladies a ride home.  Later one woman returns in a pickup truck with an old man driving.  He drives the car away and she, still not wanting anything to do with her car drives away in the truck.
Walmart camping, always interesting.

Anyone who parks like that deserves a snake in their chassis.

omg, that brought back memories. I had parked my old Mazda behind our shed. the day came when it was going off to the scrapyard. My husband said, just put it in neutral and let her roll down the hill to the lane. As I slid my seat back to get ready to roll, a snake came out from under the seat (the floor of the car had a bit hole) and went across my foot. I flew out the door, the car rolled down across the yard on it's own and I ran screaming into the house, and had a LONG shower (until the hot water ran out). End of Story. I don't like snakes too much either, LOL

That’s a great story. Made me laugh. Thanks for sharing.

Hold on. That wasn't even their car?? How is that legal. The owner shows back up and finds his car has been messed with and that's that?

Yep, exactly. I was shaking my head in disbelief the entire time. Especially the fact that the police were involved doing just as much then left leaving the four cans of fogger lying there.

Lucky the motorist got back before the firefighters arrived and filled the car with water!

If they had left the car alone, the snake would probably have left on his own accord. Poor old snakey. Nobody loves 'em.