Highway 1 west out of Anaconda, Montana is designated a scenic route through the Beaverhead Deerlodge National Forest.  It is fifty-five miles in length before it meets up with the interstate at Drummond.  Along the way are many forest service campgrounds.  We would check out those that didn’t require driving way up into the mountains, most of those being RV unfriendly-narrow tight roads.

The first campground was Spring Hill only ten miles from Anaconda. It was a confined area within a narrow canyon and most of the spots were small and unlevel, more suited for the car camper with a tent plus no cell service.  We moved on.

Next, only eight miles further was Lodgepole.  The first loop with twenty spots (most taken or had reserved signs posted) wasn’t really to my liking what with barking dogs, screaming kids and roaring generators.  The other loop with ten spots was altogether different.  Smaller sites less suitable for big trailers and humungous fifth wheels, no one there and thus quiet. 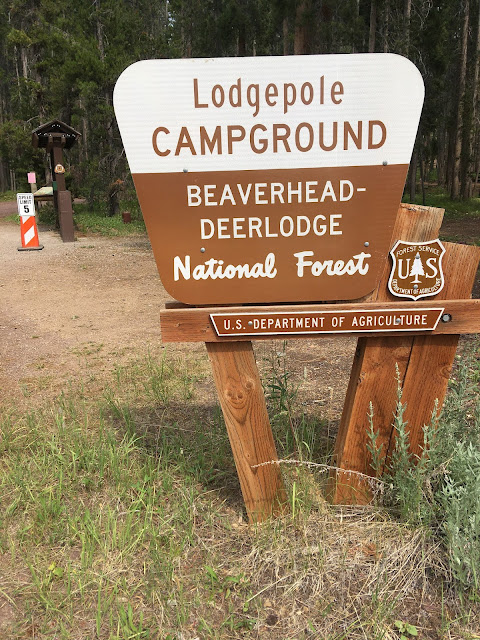 We pulled into a spot.  This just might do. 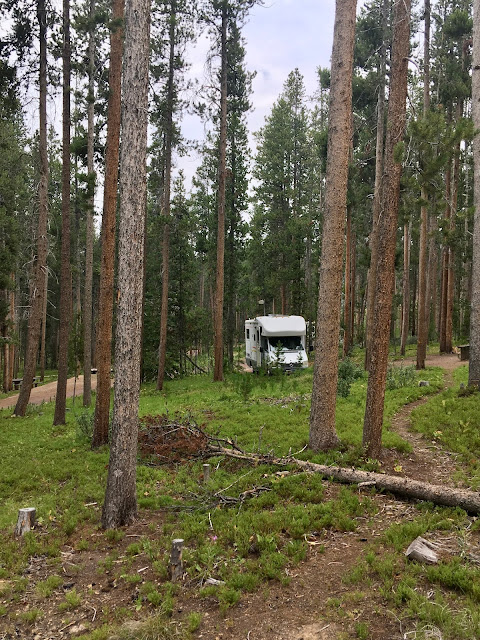 Beans loved this.  There were lots of fair game to chase.  Here she has her long lead attached.  I can let go of it when the chase is on.  Being white it is easy to find plus I have a small bell on the end.  She ran down one ground squirrel in and around the trees and when she was on top of it she kind of hesitated.
Woah, this thing is bigger than I expected and it got away down a hole. 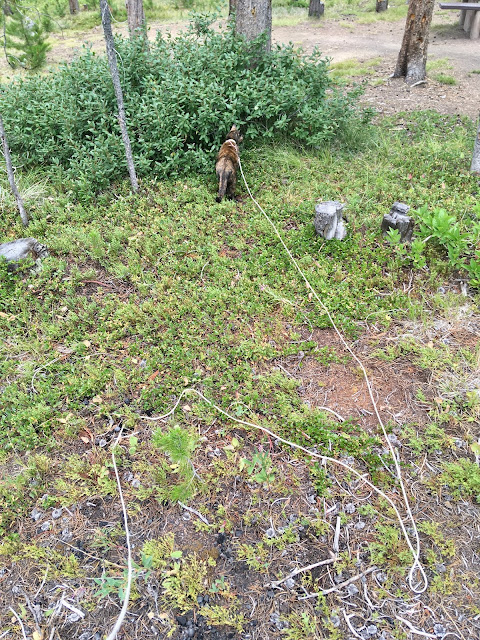 The next campground was nearby across the highway by the lake.  Looking at a satellite view I saw it was only two and a half miles away.  Oh, I’ll just ride my bicycle over there to check it out. 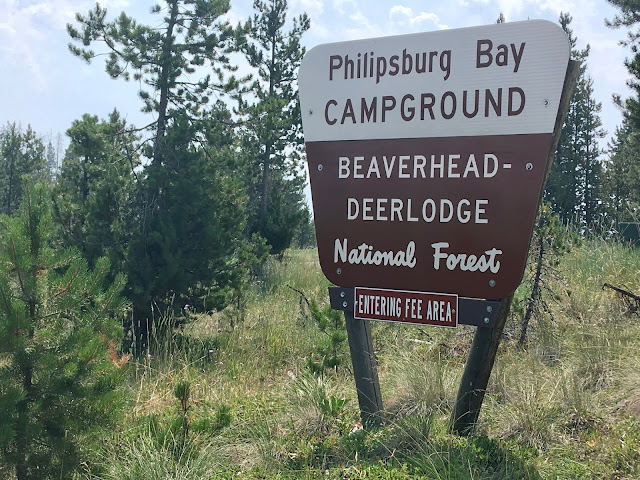 Ha!  I had to peddle uphill to this point and see the lake down there?  That meant going down to the campground along the shore and then having to peddle back up again!  Do I really want to do that?  Well I did.  It wasn’t as easy as it was back in the day but hey, I did it.  Anyway, it proved to be a massive three loop campground with all the undesirable features listed above plus the added bonus of noisy jet skies on the lake.  We were just fine where we were and ended up staying at Lodgepole for three days.
Eight dollars a day at the old person’s rate. 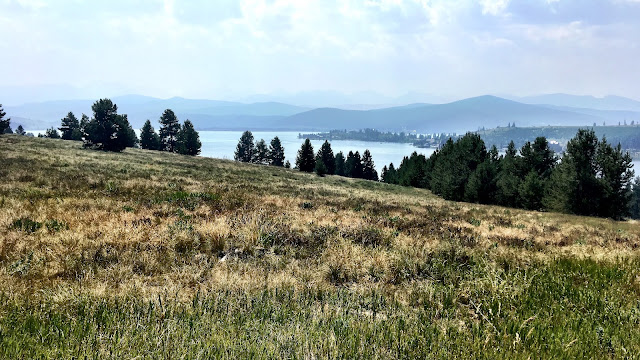 There was another campground two miles further beyond Phillipsburg Bay along the lakeshore called Piney.  Reviewers said it was in a clear-cut forest, wide open and no shade.  Many of the trees are infested with the pine bark beetle and have to be cut down in an attempt to control the spread of the beetle.  This most likely is why Piney had been clear cut.  I had no intention of going there so no disappointment.

We left Lodgepole with the next and last campground to check out just down the road (and I do mean down for it was a steep grade all three and a half miles) was Flint Creek. 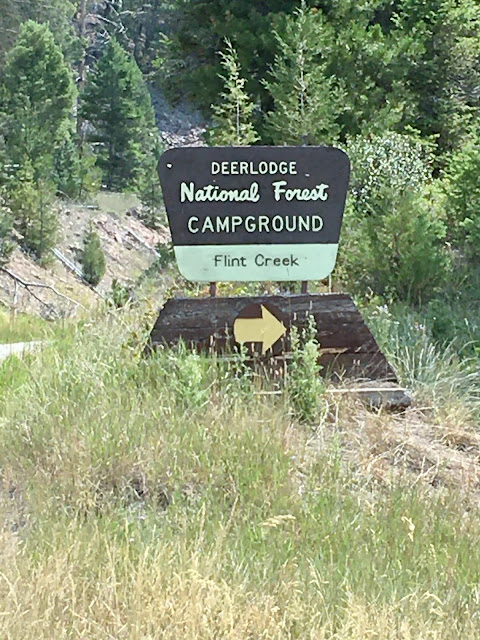 This campground had only ten sites yet this one was free to stay at.
Lots to read here. 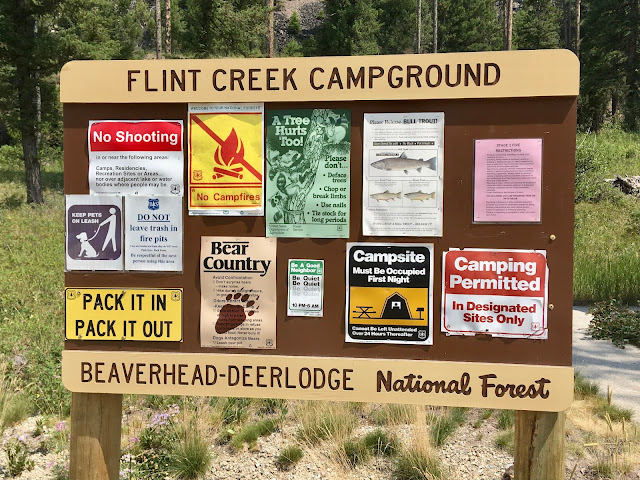 Off to the side on the restroom was this sign.
Well this is a nice thought to have when going to bed at night.
If that dam gave way we’d be done for. 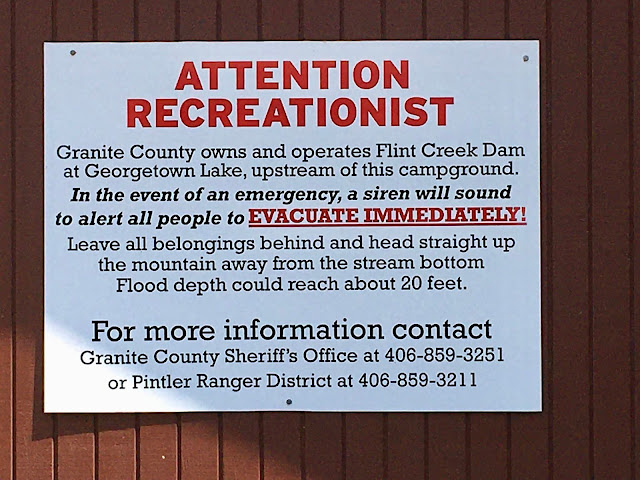 A typical site with the camp road in front of you and Flint Creek behind.
All ten sites were occupied. I hadn’t planned on staying anyway. 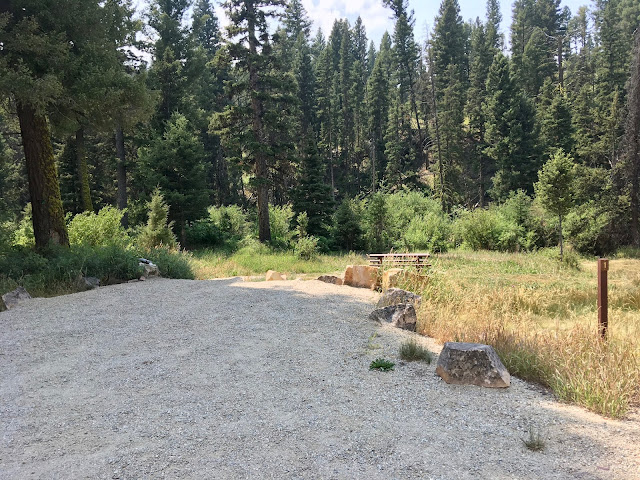 We continued on for the remaining thirty-three miles of the scenic drive and it was scenic too.
Flint Creek meandered all along the valley the entire way.  Looked good for fly fishing.
It would have been even more scenic without the smokey haze.
This was our lunch stop. 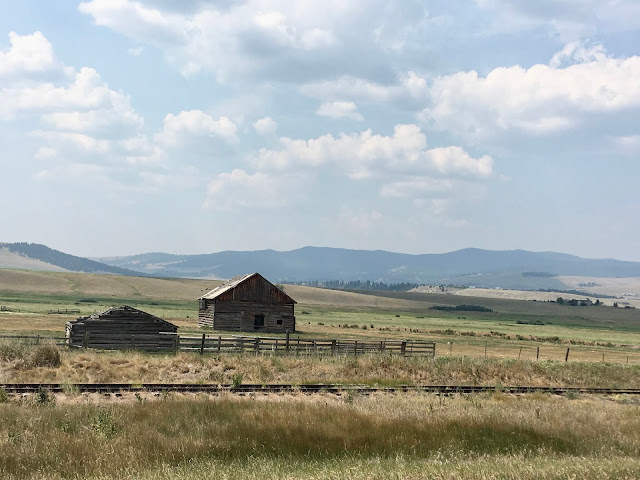 It was ten degrees warmer down out of the mountains onto the flatlands.

I love that Beans gets to roam around outside. I wish I had taken my cats outside when I first got them because now they are too afraid to go out. Well, the oldest one (Boots) has steped just outside the door but no further. There are so many outside/inside cats in the neighborhood I moved to 4 years ago, but none where I lived with the cats out in the country. I find that strange.

I love the scenery in all the photos!