MONTANA
I had a place to stay lined up eighty-five miles down the road.  Just for fun I thought I would check out some other places to stay along the way with no intention of staying at any of them.
The first one was only ten miles away across the state line in Fairview.  It was a small city park that had a swimming pool.  The traveler would park in the small parking lot where everyone else parked.  There were electrical hookups available and it was all free.  Several little girls in swim suits were running around the playground.  I didn’t think it a good idea that I step out and start taking pictures.
So you don’t get to see Fairview Park.
Twelve miles further and a few miles in off the highway back in the sticks was Richland Park. 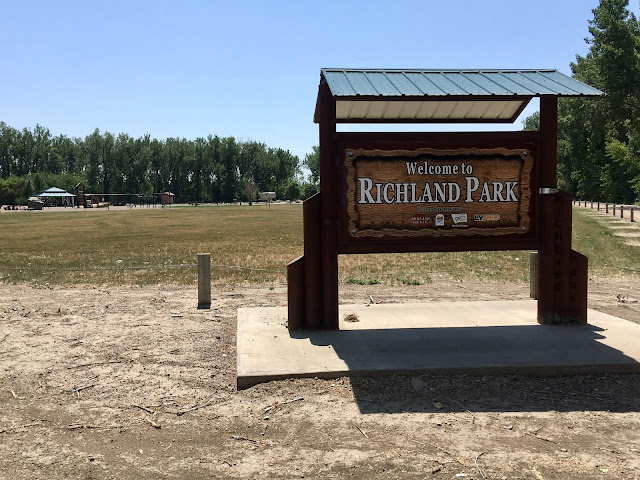 This was nicely landscaped, all new looking, complete with hook-ups but no shade.
The Yellowstone River ran close by behind the trees on the right. 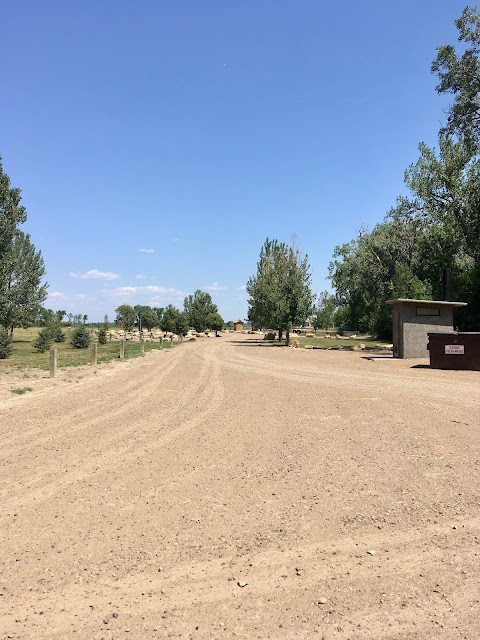 One problem though, you had to obtain a permit (free) at the Sheriff’s office seven miles away in Sidney then come back those seven miles to your camp.  One word: DUMB!  No wonder it looked so nice; hardly anyone goes through the bother to stay here.  The oldest review I saw on this place dated back to 2016 so it wasn’t like a new facility.  Get a clue Richland County. 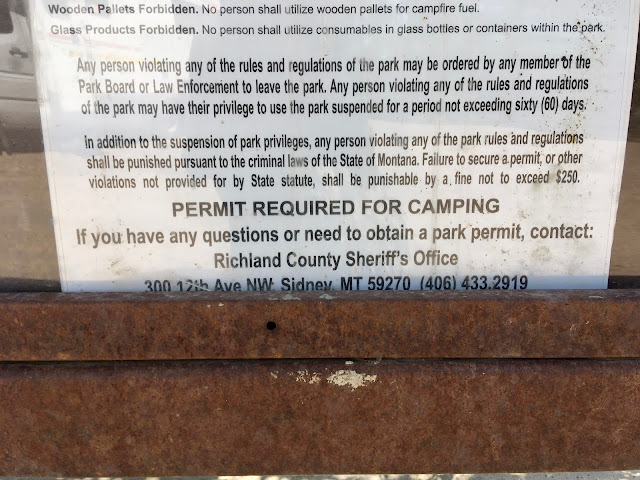 There were a few more places to stay along the way, all back in the sticks.  Mostly they were just fishing holes along the Yellowstone River and I didn’t bother checking them out.
Our goal was the Jay Cee Park in Glendive about an hour further.
It had all important shade, no hookups or water but was free. 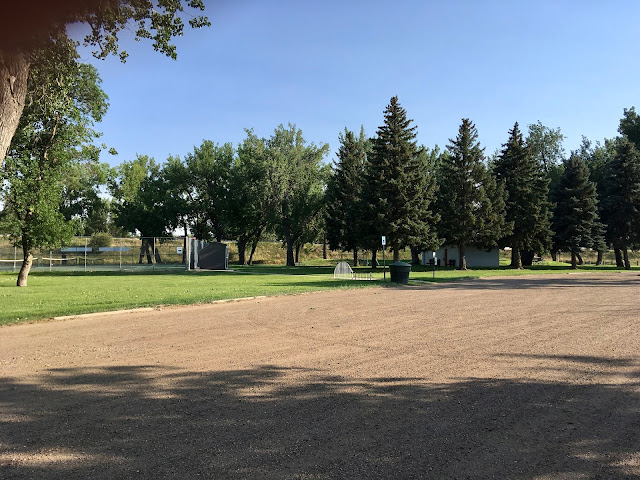 The traveler parked on the dirt road that encircled the park.
See us back in there? 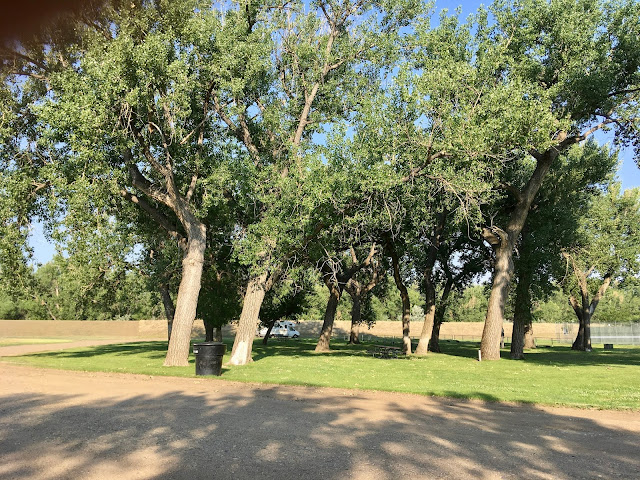 The park had four nice tennis courts, two volleyball courts and horseshoe pits that hadn’t been used anytime in the 21st century at the very least.  Does anyone play horseshoes anymore? 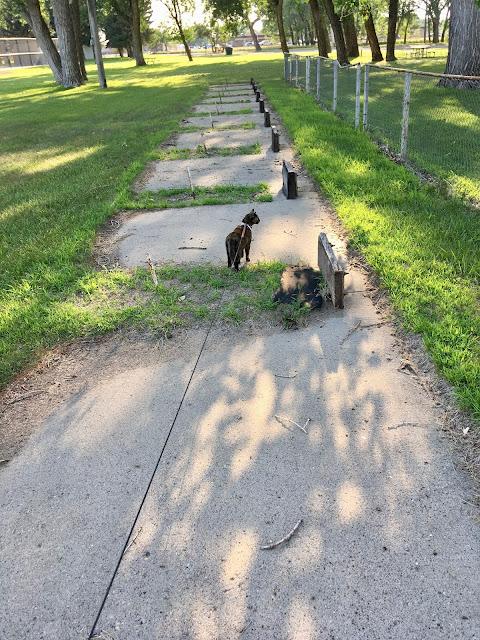 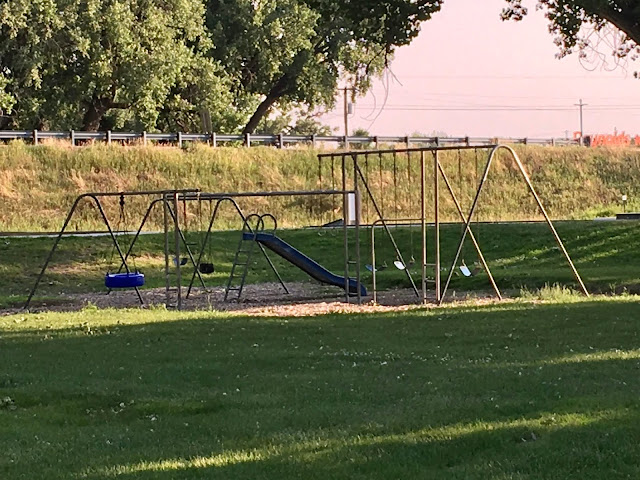 and the restrooms dated back even further to World War Two. 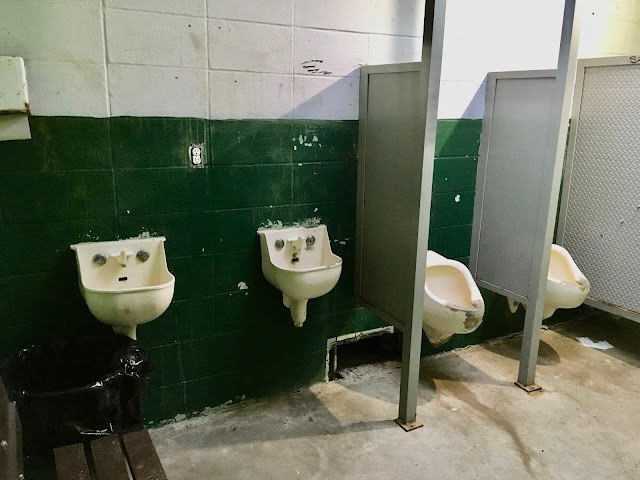 There also was one of those places where you could go
and attempt to break an arm or crack your head open. 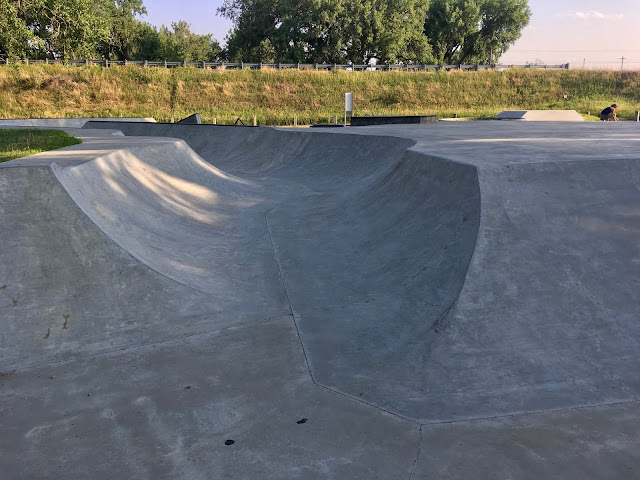 Best part (besides the Albertsons grocery store right across the way) nearby was a Little Free Library.
Nothing in there for me.  I have lots to read on my Kindle
but I sure do miss holding a book. 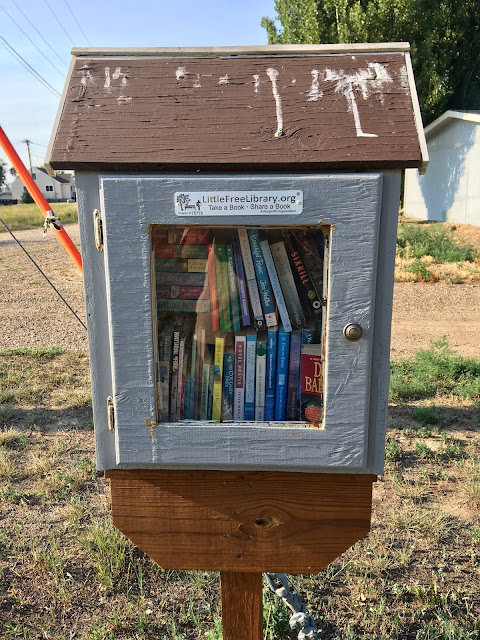 We had a nice stay at Glendive’s Jay Cee Park.
Posted by John @ Beans and I on the Loose at 11:00 PM

You seemed to be in the best of these sites though the rest rooms left a bit to be desired...but plumbing that works is often not beautiful.

LOL! I know some people who still play horseshoes.

One of my nephews could have been a professional Skateboarder. He was amazing on a Skateboard Ramp, but decided to go into the service instead.

I'm a lifelong reader and I love Little Free Libraries. I seldom take a book but I have a lot to leave.