We ended up at a Walmart in Miles City that evening.  I am still having gut issues and picked up some items that hopefully will get things straightened out down there.  We had a nice evening behind the store.  The next day was all about shade.  It is heating up and a string of 100 plus degrees (37.8 C) days were to begin over the weekend.

The first stop was Rosebud Creek campground.  This was a lovely little place. 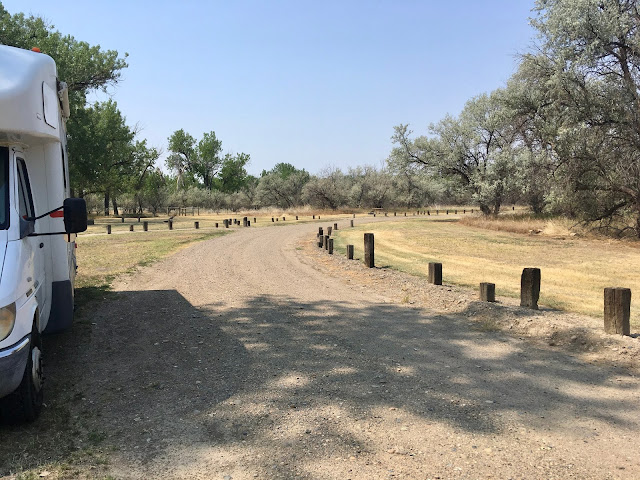 There is history here too. 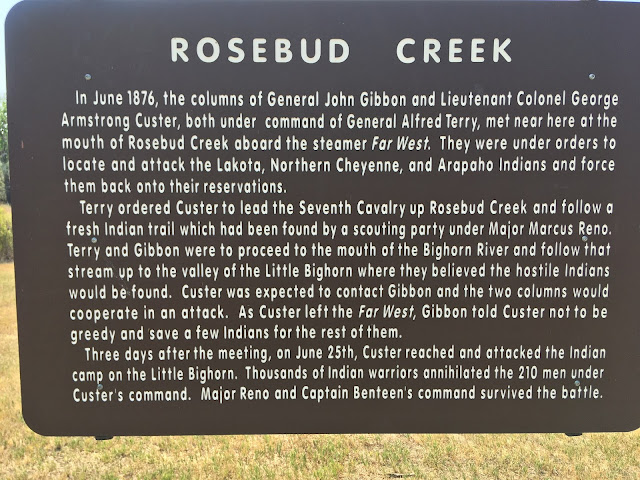 It was free to stay here and it was in the middle of a plague of locust.  It was fun walking along and all these little hoppers would spread to the side allowing you to pass by.  Beans wasn’t amused. 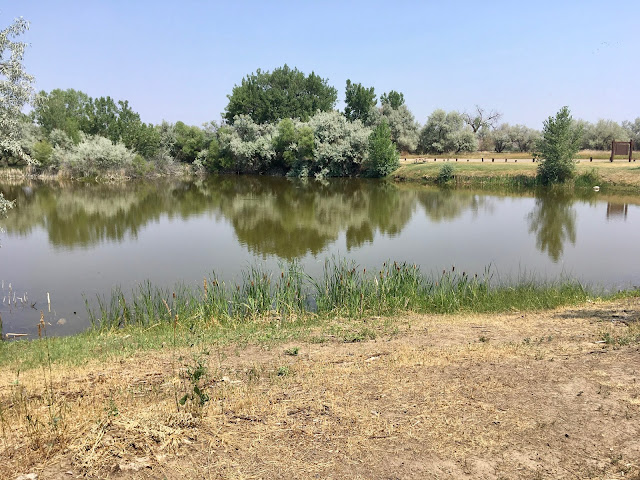 It was still morning and we had miles to put in with the air conditioner going so we moved on.
This was the only spot with shade and I’ll add, we could have had it all to ourselves.
No one was there at Rosebud. 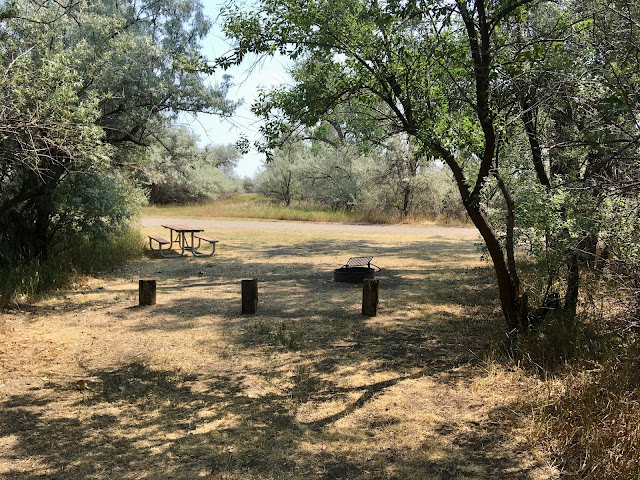 An hour of driving later brought us to Captain Clark, a fishing hole along the Yellowstone. 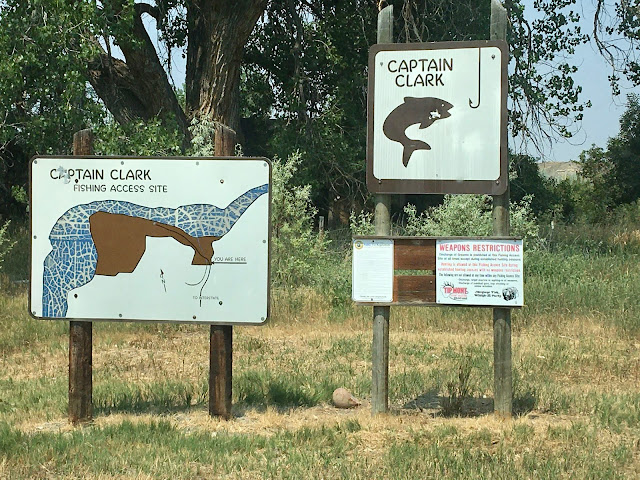 After a few miles of dirt farm road and almost there we were greeted with this. 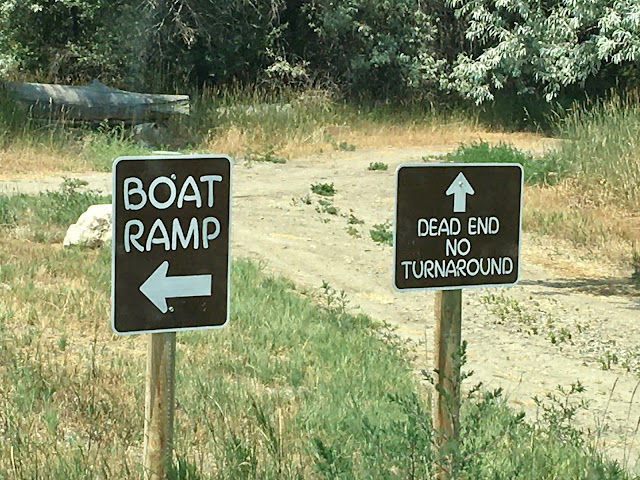 Nope.  Not going any further.  I did a turnaround right there which was tight to do.
See my copilot? 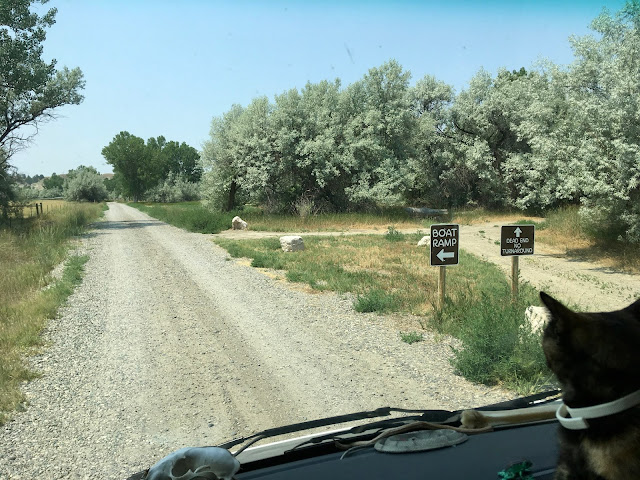 I wasn’t too disappointed for we had just passed this place when I took the above photo. 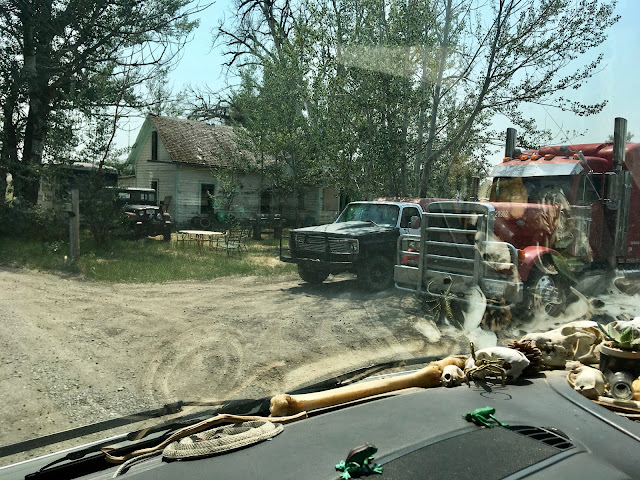 As some reviewers noted for Captain Clark fishing access “You have to pass by a sketchy looking place to get there and we weren’t too comfortable being so close to whatever lives there.” 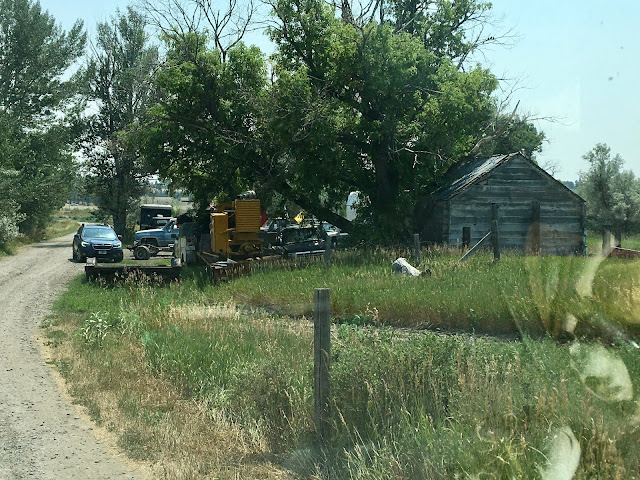 Towards the end of the day was Voyagers Rest which reviewers had noted was full of shade.
I had high hopes.
After two miles of farm road in we arrived. 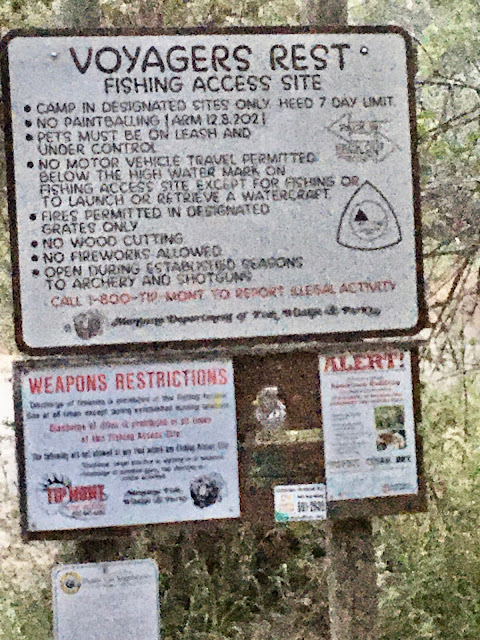 Oh it had shade alright and a bazillion mosquitoes.  I got bit by three just stepping out for this photo.  That is all the exploring I did.  It made me think of William Clark and his men along with Sacagawea with her baby coming through here in 1806.  How did they cope?  The campground road was in bad shape and nothing you’d want to be trapped in on if it rained.  There was no breeze and the air was stifling.  Plus there was a fee to stay.  They wanted $12 if you had a Montana fishing license, $18 if no license.  This place wasn’t worth two cents.  Now back at Rosebud that would have been a different story. 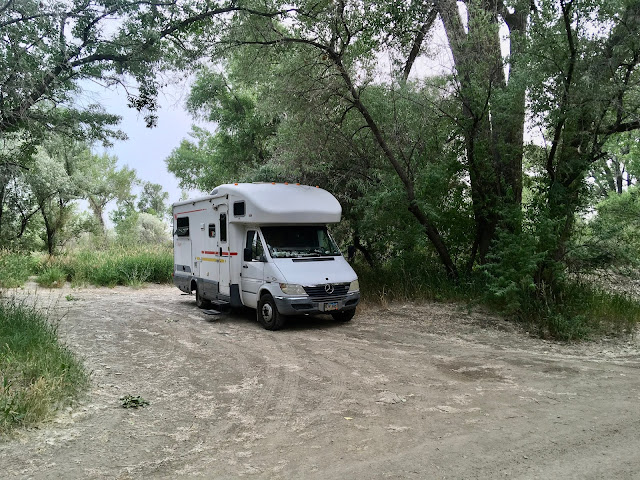 I was tired and not feeling all that great but stayed anyway despite not being all that comfortable being there (like what reason would someone be driving through there at 1a.m.?) and we left before sunrise.
I didn’t even leave two cents.
I will add, that afternoon a truck pulling a long fifth-wheel trailer passed in front of us and stopped.  You could not go any further unless in a four-wheel drive truck as the road dipped through a mud hole.  “How is he going to back that thing out from here?”  The guy did the most amazing feat of backing that long trailer into the spot next to us (same size as we are in) and got the truck turned around and aimed the other direction then pulled on out.  His wife had got out and was spotting for him watching for tree branches. They were in a large spot along the rutted camp road when we left that morning.

Hi John-
Just getting caught up with your summer travel blogs. You need to be someplace cool! Try higher elevations. But watch the following map for wildfires, there are LOTS of them burning in Montana right now!:
https://inciweb.nwcg.gov/

I always check that map before my next destination. With the drought out west, these fires can spring up overnight anywhere!
I hope you feel better soon.
-Cinn
PS: I retired so I'm not online much anymore, including RVillage.

You’re right Cinn but I just didn’t feel like putting in the time and effort to log in all those miles to get to elevation. We are getting there slowly. I would rather deal with heat than smoke anyway. As long as we have shade, we’re fine. I left you a congratulations on your retirement somewhere when I first learned of it so if you didn’t see it, well there it is again. Thanks for following along with us.