About ten miles down the road was our intended campground. 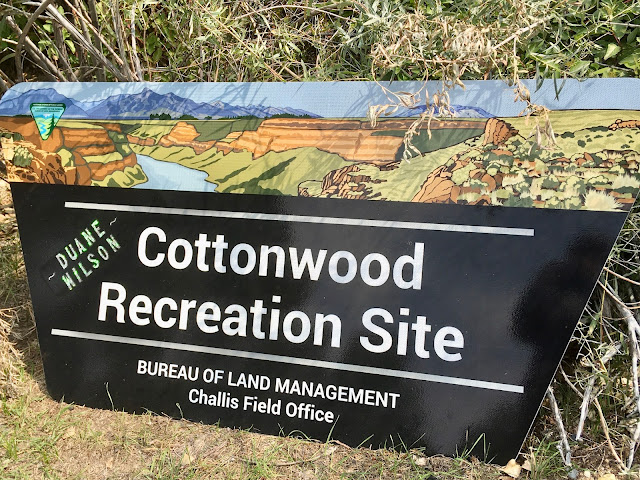 This was a 14-site campground even more fancy than Spring Gulch was. 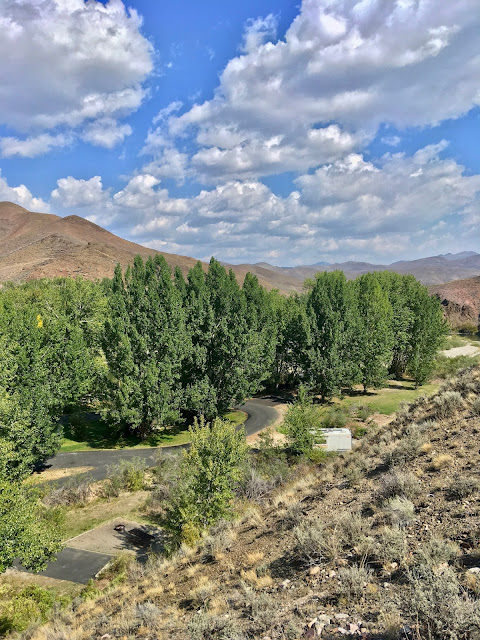 Looks like a city park.
This place even had an underground irrigation system.
The sprinklers came on at 11 a.m. so you had to be aware. 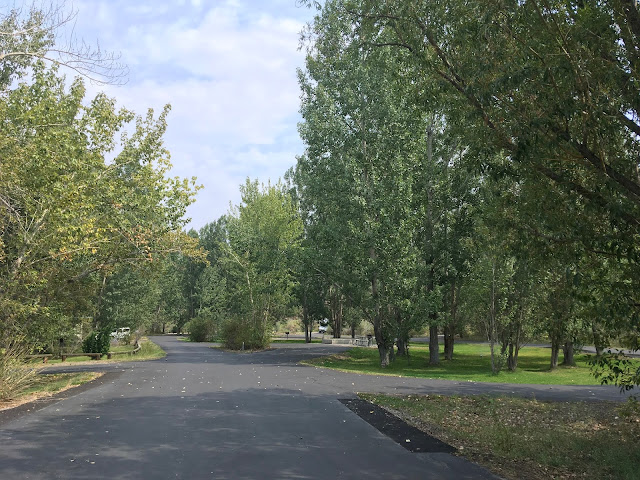 Up by the camp host and pay station was this plaque attached to the rock face. 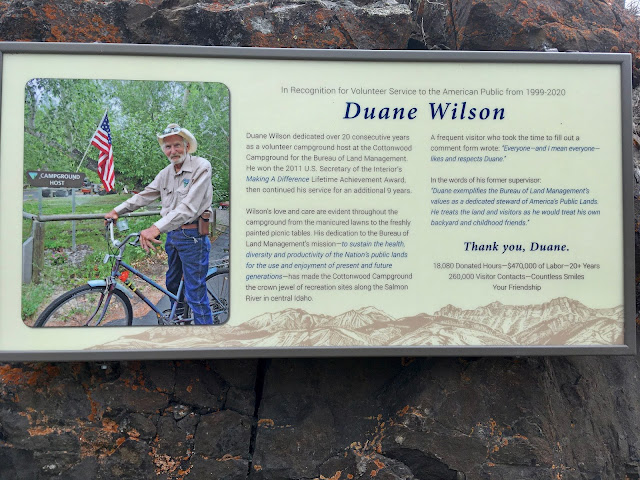 Okay, this left me thinking for awhile. 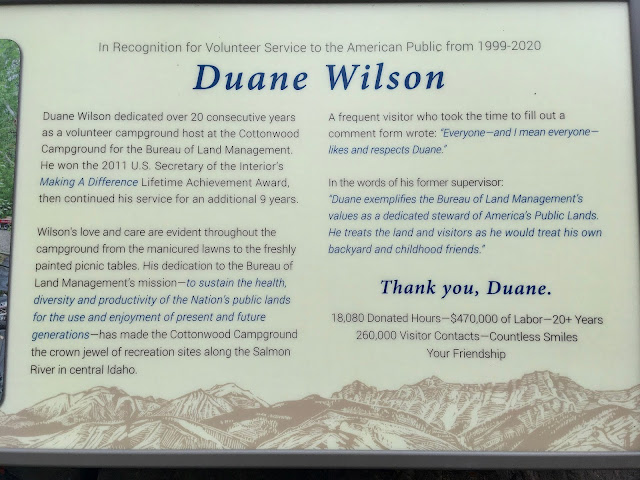 I asked the camp host about Duane wondering where he spent his winters and, thinking of Dugout Dick, was Duane having some health problems when he died. 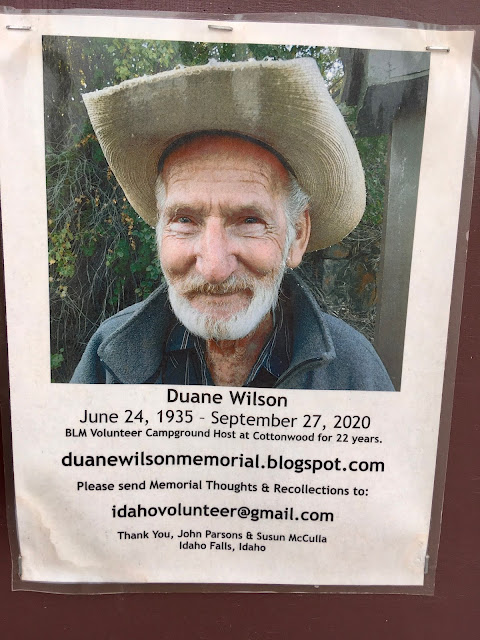 Turned out the current camp host was Duane’s son-in-law.  Duane had a home in California east of Barstow and returned there every winter.  He was in good health too.  What had happened was Duane had decided he was going to retire from the camp hosting after having done so for those 22 years.  A retirement part was held by the BLM there at the campground.  This was to be his last season.  Sometime later he had got up in the night and tripped over his cat falling against the countertop in the RV injuring his side.  He was taken to the hospital.  Meanwhile his daughter came from Colorado to help him and take over camp duties.  Duane developed pneumonia but eventually got better and returned to the campground.  In the evening after seemingly in good spirits sitting up at his computer playing games he went to bed and passed away.
I asked about all the lawn care as I would see the host out there everyday mowing.  He said it was I suspected, a daily job when he first took over in the spring.  “I kind of have it down now and only have to devote five days to it among the other duties.”  Mowing while riding a mower going back and forth, back and forth.  Then there were large sections that could only be done by a regular power mower.
Not really something I would want to be doing constantly.
This is just part of it. 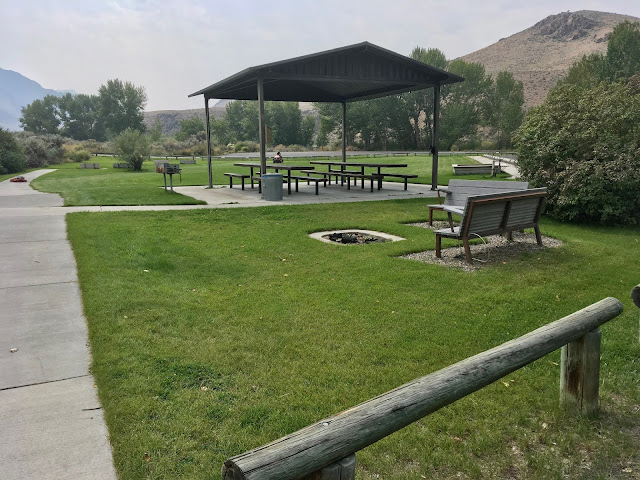 We stayed four days here.  It was generally quiet so it didn’t take much with someone running their generator on down the line somewhere to irritate  me.

I really need to get back out in the boonies. 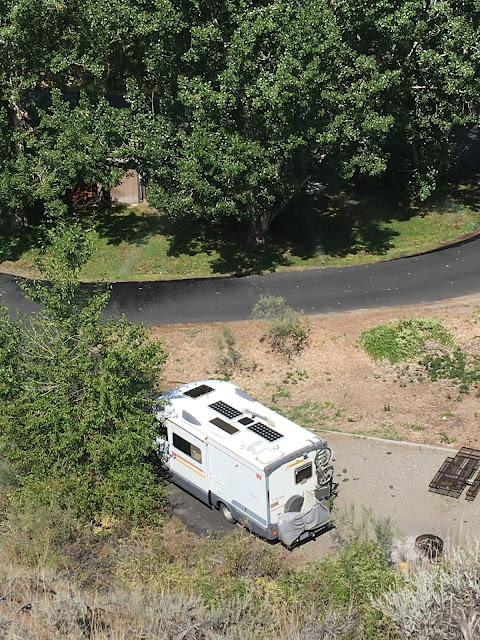 "According to a CDC report, many people get hurt every year when chasing or tripping over their pets -- cats as well as dogs.

"The study, published in the Journal of Safety Research, shows that dogs and cats contribute to injuries that send an estimated 87,000 people to emergency rooms every year."

I found some neat battery operated motion senser lights that I have placed along the floor boards to keep from tripping on our 2 cats at night. Amazon, work well!!

I think I camped in the same spot as you did...It is a swell campground..