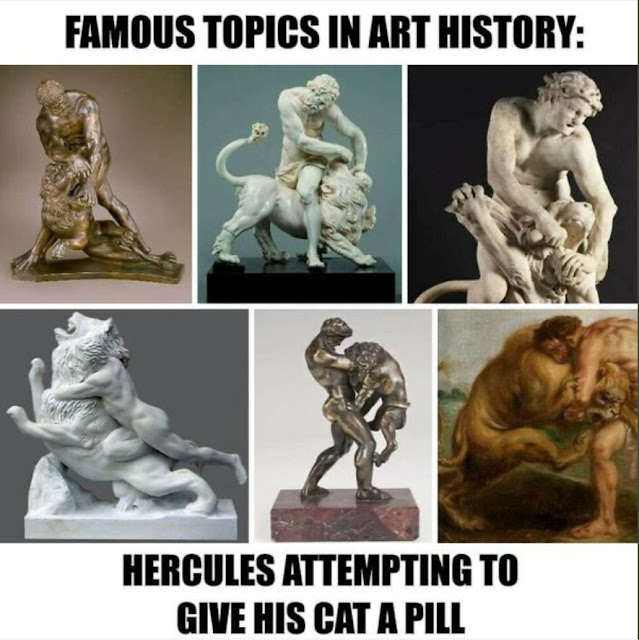 Now I have had cats all my life and many of them at one time or more I have had to give pills.  I know what I am up against and have experience.  Beans though is an entirely different beast.

She is to have a pill twice a day for five days then the remainder once a day until gone.

Pill one:  I used tried and proven tactics from the past.  This was like a World Wrestling Association title match. There was blood.  I can happily report that my wounds are healing up nicely.

Pill two:  Being nice isn’t going to work with Beans.  I Googled ‘How to give a cat a pill’.  Maybe I’m missing something.  It mentioned the towel wrap.  “Yeah, the burrito thing Lynette did.”  I couldn’t find a large towel, so I used the heavy Mexican blanket covering the bed.  I rolled her up in it then sat on her giving her a full body press.  She didn’t stand a chance.

Pill three:  “Okay, that was way too easy.  Where did the pill go?”  I looked all over, shook out the blanket...nothing.  It must have went down the gullet straight away.

Pill four:  Well we’re back to spitting out the pill over and over.  I finally got the soggy mess in there to stay.

Pill five:  She has now resigned herself to her fate.  Fighting back isn‘t working all that well for her but she sure has one strong determined tongue.

Pill six:  I choose to live dangerously.  I gave her the pill without using the Mexican blanket wrap.  Success!

Pill seven:  I go back to making a Beans burrito.  This is a safe work zone after all.

Pill eight: No burrito wrap and no more fighting.

Despite what I wrote she really is a sweetheart. After it is over she’s fine.  She’s not mad or pissed at me and holds no grudge.  She’ll give me a few head-butts and I give her a few treats.

We are a week past the vet visit well into half the bottle of pills gone when you read this.  Beans is doing fine and not having any more coughing and wheezing spells.  I kind of feel she was on the mend already when we drove down to Yuma.  You’ll recall she hadn’t a spell any once we got underway except for the paper towel dispenser episode in the exam room.  There has been only one other attack in the past six days.  But the days leading up to when I made that appointment she was having four, five or more every day.  I regret none taking her in to Foothills Animal Hospital.  It was a good experience for her and I learned at lot about my sweet Beans.

Been there done that. I've had cats and dogs for most of my life and at present have 2 cats and a dog. I've learned to wrap it in some kind of food and they gulp it down.

When my last kitty had thyroid disease and was kept alive by pills twice a day, they gave me some little pill pockets. They were too big for her...so I cut them in half...but after a few weeks, she was on to me, and didn't like them any more. We tried lots of methods, burrito cat, holding her mouth open by pulling her head back till it had to open, but sometimes even rubbing the pill in her throat, she'd find a way to send it back up. Good that you all will have an ending of this treatment to both look forward to!

Sinbad was on those little pink pills for thyroid too. They made him throw up so the doctor changed the medication to a transdermal cream that was applied to the inside of his ear flap. That worked and gave us two more years together