Beans had been coughing and hacking real bad which prompted me to call around and make that appointment.  We left at 1:30, arrived at 3:30 and got called in at 5:30.  Not once during those four hours did she so much as wheeze.  Naturally.  The vet lady came in and after greeting Beans she began taking notes as to the questions she asked me.  Her fingers were dancing on that keyboard as she looked up at the computer screen.  My goodness she must have written down pages. 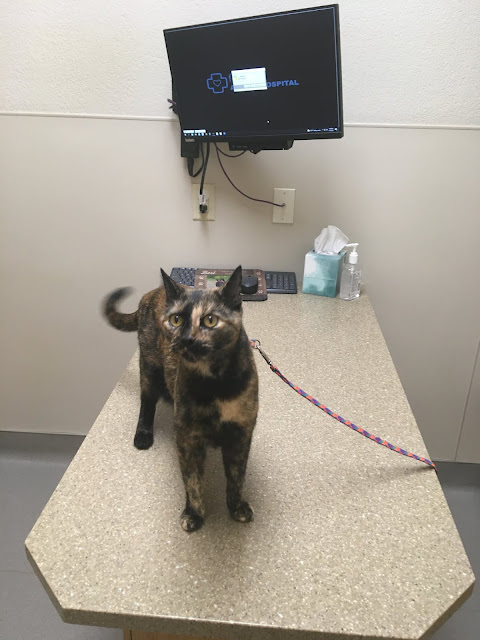 She brought out the scales to get a weight.  No one has ever picked up Beans except me, but she was good and allowed the vet to pick her up and set her on the scales.  Well Beans wanted off of course.  She was on there long enough to get a reading (9.3 pounds) and when she lifted her off Beans reached out and activated the automatic paper towel dispenser.  The thing whirred and spit out a towel which totally freaked out Beans. She went ballistic.  “Just let her go!” I said to the vet.  I didn’t want the vet to get hurt.  Beans landed on the floor and ran around the table to get up on the bench we had been sitting on.  She immediately began coughing and hacking.  “There!  She’s doing it.”  The vet got to see her in action and typed more in on the computer. 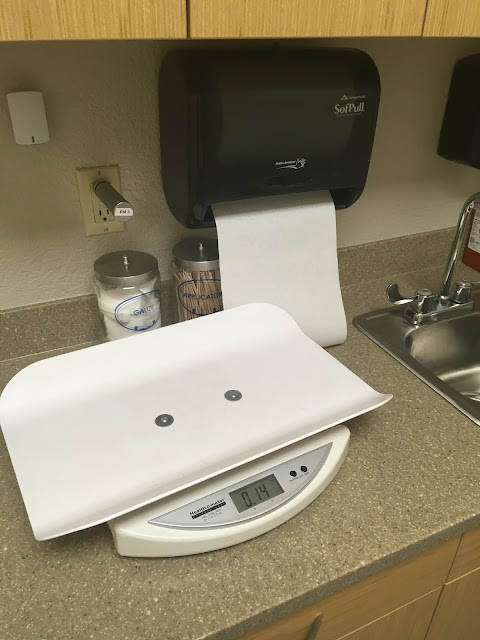 “Okay, that was good to see” she said.  I’ll go get the doctor and we’ll be right back.  “Oh, I thought you were the doctor.”  She was the veterinarian assistant tech.  Had me fooled.  She was that good.

Beans and I sat there on the bench.  By now she was all calmed down.  “Good girl.  I’m so glad you demonstrated for the doctor.”  Then I had to laugh at the whole paper towel dispenser scene.

So glad she ran around and hacked a bit...much more convincing than your telling about her. I do hope she's received whatever treatment she needs.

Glad that the vet assistant got to hear her. I bet the paper towel incident was hilarious in person, I know my cats and dog do some stuff that cracks me up!

Looking forward to reading what the diagnosis was!

Hi It's Tues...and the title of Vet Visit part 3 is up, but it has an error message. Oops.