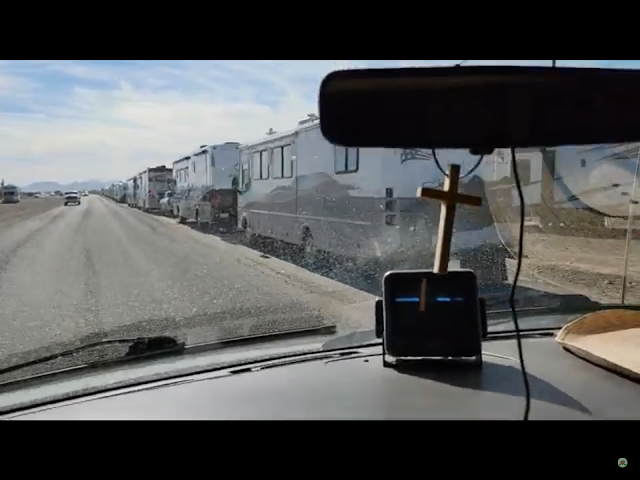 On a previous post awhile back I mentioned the line for those waiting to dump their RV holding tanks at only BLM Long Term Stay dump station there is.  Above is a screenshot from a friend’s YouTube video I watched yesterday. You cannot see the head of the line.  I counted vehicles as he slowly drove by.  There were twenty-four in line.

Now back in the day when I had to use dump stations I had the process down.  My record time from stop, get out, hook up to the drain, pull the levers, wait to complete the emptying of the tanks, shut valves, unhook and rinse out the hose, put it away, get back in and drive away was a little over five minutes.  Most of the time it was around ten minutes or so when I wasn’t trying to set a record.

I have watched people fiddle-fart around in the dumping procedure taking as long as twenty minutes or so.  Big class A RVs take a while to empty their much larger holding tanks.  They can have as much as 65 gallons of gray water (washing and showering) and 50 gallons of black water (toilet water).

For the sake of easy math lets just say the minimum time for each vehicle is ten minutes.  You’re number twenty-four in line like that guy behind the cross hanging from Kevin’s rear view mirror.  That is 240 minutes.  Now there are two lanes and two drains once you get to the dump point.  So we can cut that 240 in half - 120 minutes.  That guy at the very least will be in line for two hours!

There is one place in town that I know that one can dump their tanks.  They charge $5 to $18 depending on the size of your rig.  If you were the guy behind the cross, would it be worth it to you to pay $18 to dump your tanks?  I am pretty much a tightwad but my time is precious to me.  Those of you who have been with me for awhile know I abhor waiting in lines.  I don’t have to tell you what I would do.

That guy could watch an entire feature length movie on his iPad while waiting.  Think about it!

That certainly sounds like a lot of time wasted. How often do you have to empty tanks?

I just did before moving to this new spot. It was three months. The tanks were about half full. I have a composting toilet now. That is how I can go for so long. Only have grey water in the tanks.

I saw your toilet set up which looks very efficient. I meant to read up on them. Thank you for the reminder. Waiting two hours every 3 months is not so awful as having to it every week. Even every month.

I am not the norm at three months. Most probably need to dump once or twice a month especially so if they a couple in an RV. My composting toilet is a C-head if you are investigating.

I can dump my tanks in three minutes.....Drives me nutz when some clowns spend way too much time and don't care about anyone behind them...They aren't storing their food in the tanks, are they?