Dirty laundry was stacking up.  It would have to be dealt with soon.  I woke up Sunday morning.  It was Mother’s Day.  No woman would be would doing the family laundry on Mother’s Day.  Yeah, that’s what I’ll do today.  I’ll have it all to myself.

I got online while having my morning coffee and bagel.  Google Map for laundromats in this area.  There were none, zero, zip!  I couldn’t believe a town of 4500 had no laundromats.  So much for that idea

We left the park on Monday, drove on out the residential section, turned left to pick up the highway to go north and what do I see right away on my right?  I couldn’t believe my eyes. 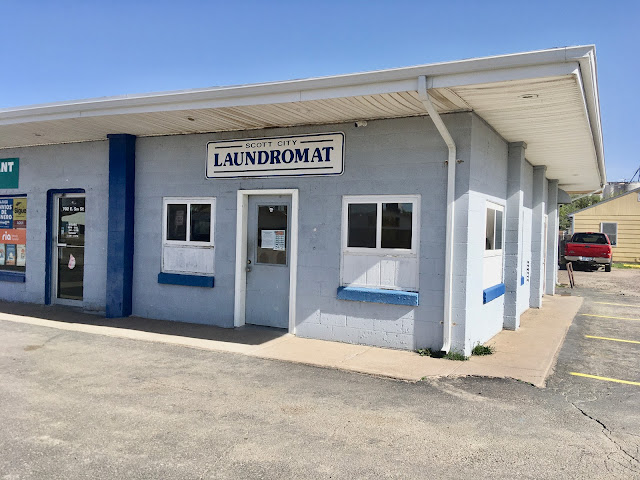 I was elated. That would all change soon.
Inside no one was there except the owner emptying the coins from the machines.  He was a nice Hispanic fellow.  I told him about my failed search.  “Si, I guess I should put it on Google.”
I made two trips bringing in my dirty laundry.  The owner had left.  I used the first small white machine in the middle of the photo.  $3.00 a load.  That’s the highest I have ever seen.  The tub filled.  I rinsed the measuring cap in the water.  Cold.  I had it set for hot.  Well thats just great.
No idea how long it washed as there was no timer on the machine. 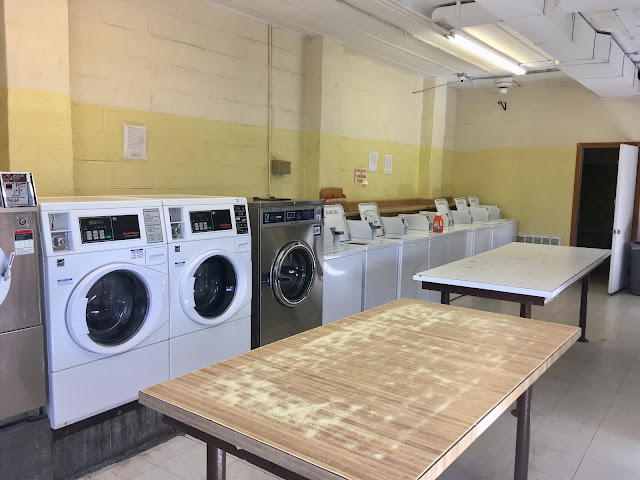 I used the top and bottom white dryers to the right.  Twenty-five cents for five minutes.  That is the shortest time ever I have encountered.  The machines had a one minute cool-down mode.  So I got four minutes of actual heat.  I moved everything to the machine to the right for the next go-around where got five actual minutes of drying. 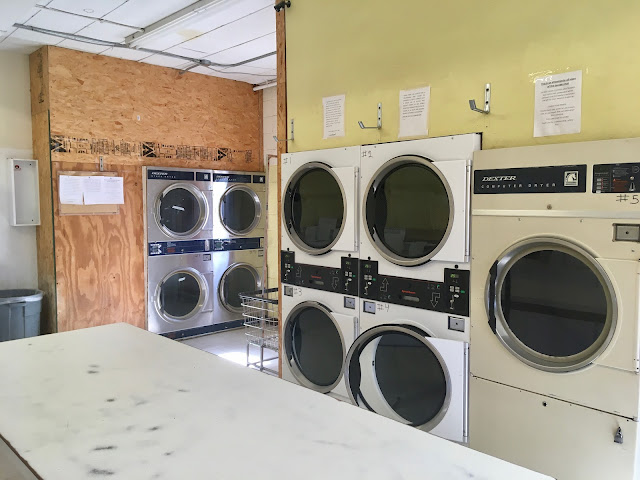 A local came in.  Being the chatty friendly guy that I am I was telling her what I told the owner adding on about my great idea of doing laundry on Sunday, Mother’s Day which didn’t happen.
She said, “Oh you don’t want to come in here on Sunday.  I did that once.  All the Mexican women were in here with all their kids running around.  When I walked in it got real quiet and they all gave me the stink-eye.  I don’t come in on Sundays anymore.”
I pulled my semi-dry laundry out while she was talking.  Three white t-shirts looked dirtier than they were when I put them in!  What the hell?  Cold water for hot, four minute (or five) drying time and now dirtier clothing.  The coke machine charged $2.50 for a soda.  I didn’t trust the change machine to the far right.  I counted the quarters to make sure I got ten dollars back.  I did. 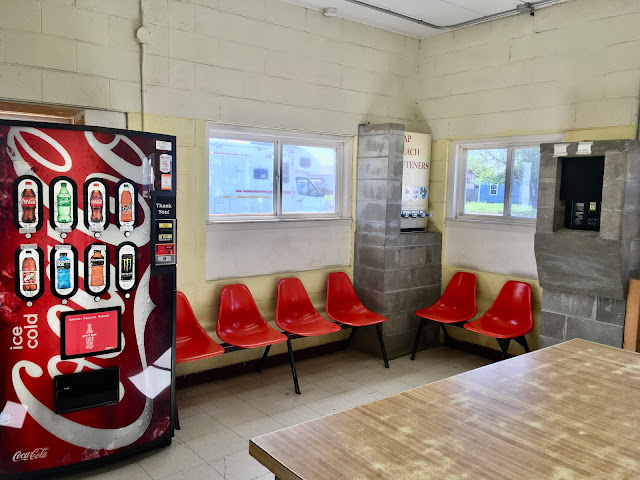 Okay ladies, help me out.
Maybe I need to change laundry detergent.  I’ve been using TIDE liquid.  Is that why my whites aren’t whiter than white?  Maybe I need bleach.  Will that ruin the lettering on one of the t-shirts?  One shirt is a light blue and it had dirt marks on it too.  Would bleach help that?
Disregard the sunlight and shadows caused by the ceiling vent fan.
See the splotches?
Or was this all because of the machines? 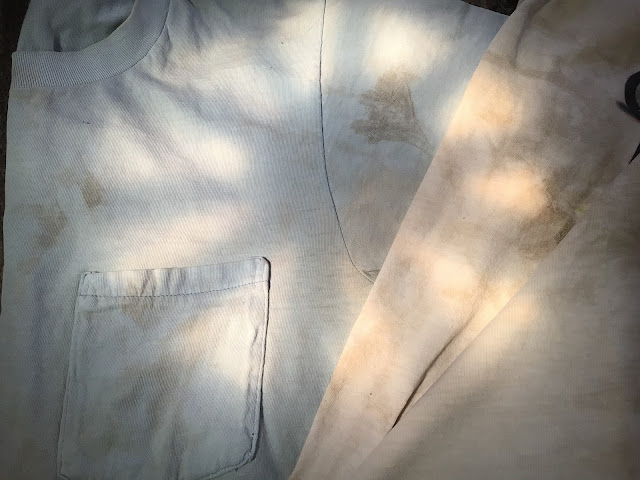 personally, I would wash using one of those non-electric (maybe from Lehmans catalog) hand washers, then hang out in the sun. Harder to do, but cheaper and better. Enjoy your blog every morning with my coffee. Cheers, Elaine

Yikes...Did they have those splotches before you washed them? Hot water and Tide should get them out...whenever you get it. If not, bleach would help. I don't see any design, but sometimes they do go away a bit with bleach. I agree that those machines may not have been clean to start with. So sorry. Give them the sniff test. I wouldn't even wear them if they smell bad.

Gees. I would be upset. I wonder if it was hard water. If it is, get a product called Red Out. Do the laundry adding the red out to the soapy water and give it some soaking time.

When a business has no competition, they charge higher prices and crappy service because the can get away with it. You have made me want to run off and open a laundromat.

Once upon a time, when we were living rough, I made a simple washing apparatus that worked just great. Buy a five gallon bucket with a lid and a brand new toilet plunger. Cut a hole in the middle of the lid, fill up with your hot or cold water and detergent. sit comfortably in your chair, read, relax, and plunge away for as long as you desire. Repeat with rinse water. Works a charm. BTW, using a product like OxiClean is safer than bleach.