The Wasp, Coyotes and a Cat 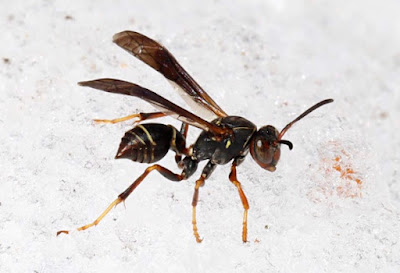 I was sitting at the table when I noticed Beans interested in something flying about in the overhead area.  I saw a Paper Wasp had got inside.  We’ve had bees and yellow jacket wasps come in before but nothing as lethal looking as this guy was (picture is not the actual infiltrator).  All I had to do was say “Beans, NO” and she backed away from it.  I think it is part instinct for her to approach these creatures cautiously, just generally interested.  She doesn’t go right after them like she would with a moth or fly.  Also it may be part of me telling her “no” on previous occasions.  Thankfully she minds well.  I’d sure hate for her to bat at it and get stung.  I whacked it in mid-flight which sent it deeper into my stored stuff, lost.  Not a smart move.  It came out later, Beans noticed it again and I was able to get it outside.  Good girl.

We have heard coyotes in many places.  Beans just ignores their howling at night, even if one is very close.  Where we are now I have only heard one, one time.  Then a couple of nights ago all of a sudden a whole herd of them lit off howling furiously.  At the very same time Beans became very agitated and ran around inside.  Not because of the coyotes I don’t believe.  I think whatever set off the coyotes in a frenzy also set off Beans.  No telling what it was.

Also, one night I woke as usual around 3 a.m. and couldn’t go back to sleep.  The night was very still, extremely quiet.  Beans was asleep down by my feet.  Suddenly she got up and looked out the open window next to the bed.  Outside is brightly lit by a street light atop the power pole with the not-so-safe looking electrical outlet.  “What is it Beans?”  I looked out and saw a cat walk silently away from us.  He had come out from beneath the RV.  The cat made no sound walking quietly away.  How did she know it was there as quiet as the cat was walking on the soft grass?

Animals are amazing, especially my Beans.

What excitement from various critters! Perhaps the other cat had done a territorial marking somewhere on the RV, and Beans picked up the scent. Glad you got the wasp out without anyone getting hurt.

Cats have very acute hearing and night vision. I will bet that she also smelled the other cat. They are well evolved little hunters.

Speaking of hunters, coyote hunt as a pack. They sometimes get very excited when they make a kill. It is a primal sound that raises MY hackles. I imagine, as potential prey, poor Beans has an even more visceral response. *shiver*

Reading about coyotes, I have learned that they hunt in pairs and not packs. When they return to the pack after a successful hunt there can be a 'grouop howl'. It can also be a warning if their territory has been invaded.