A Bad Day, A Worrisome Drive

We were set up in Burwell Park camp that afternoon to sit out the heat.  It was then I realized my eyeglasses were missing.  I searched for them for a couple of hours in the sweltering heat.  The more I looked the more I feared I had lost them.  I was just sick over it.  I was driving myself insane trying to recall the last time I wore them.  I had others but these I wore most.  I went to bed that evening throughly upset. 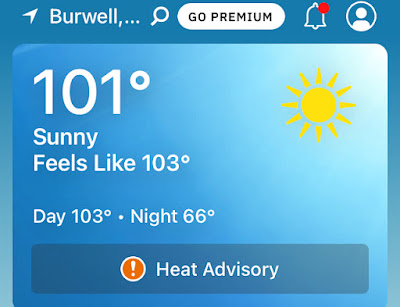 In the morning I was no better.  I searched all over again.  Nothing.  We left Burwell resigning myself to the fact they were gone for good.  I considered driving back to Taylor to look where we were parked.  I didn’t.  Instead we continued on to a couple campgrounds along Lake Calamus a dozen or so miles to the north.  We were greeted by this sign. 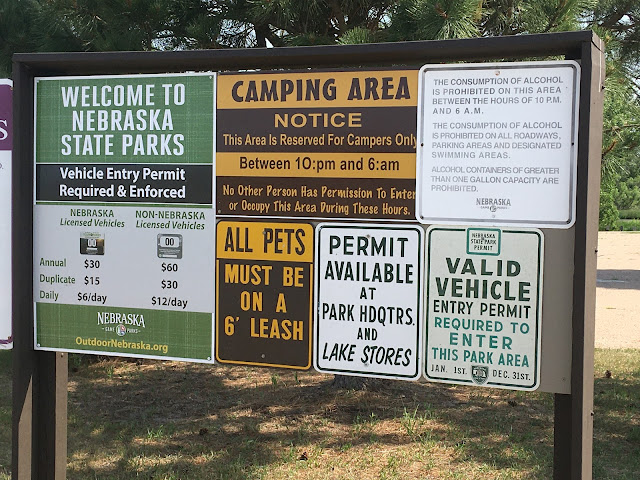 I will not bow down to extortion by states charging extra for being an non-resident.  Just go ahead and say You are not welcome and be done with it.  We drove on to the next campground and it was the same.  Now what?  Our next site was a city park campground in Bassett nearly fifty miles to the north.  No towns lay in between.  I saw the fuel gauge was at a quarter of a tank.  Damn, I should have filled up in Burwell before leaving.  I wasn’t thinking clearly.  My mind was a mess over the lost glasses.  I drove on, slower, fighting a headwind all the way.  I checked my Gas Buddy app.  NO DIESEL FOUND.  Should I go back to Burwell?  I felt we would make it on fuel.  I went back to thinking what to do about the glasses.  I ran it through my mind to just replace them.  Maybe at a Walmart.  I checked the fuel gauge. Then kept thinking about all the malarkey I would have to deal with in replacing them.  They would require eye exam.  I don’t want an eye exam.  “Just make a pair with this strength from these glasses.”  I have several pairs of eyeglasses.  I checked the fuel gauge.  How long would I have to hang around before they would be delivered?  Could they be sent to another Walmart up the road?  I swerved to miss a snake in the road.  Did I miss him?  Oh geez...I don’t know.  I was upset thinking I may have hit the snake with the back tires.  Sad. I looked at the fuel gauge.  I checked the GPS for the nearest gas stations.  Ainsworth.  Where the hell is Ainsworth?  I grabbed the map.  Seventeen miles west of Bassett.  Okay.  We can do that on a no wind day.  First find this campground in Bassett.  We entered the south edge of town.  Bassett had a gas station.  Whew!  We’ll fill up before leaving.
The turnoff into the campground at the fairgrounds.  Some to-do was going on.
Great!  Just great! 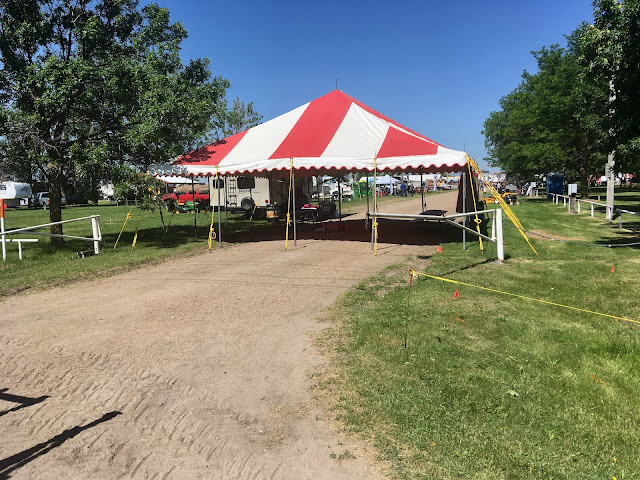 I drove on around the fairgrounds to the west end.  It was a wide open grassy area.  Baseball diamonds stood in the corner.  I have been having good luck with baseball diamonds lately.  The dirt road passed the baseball field and led out into some wetlands.
This will do.  In fact this is quite nice.
We parked and tried to relax and regroup.  A gas station was here and I had a plan about the eyeglasses.
Worse could happen. 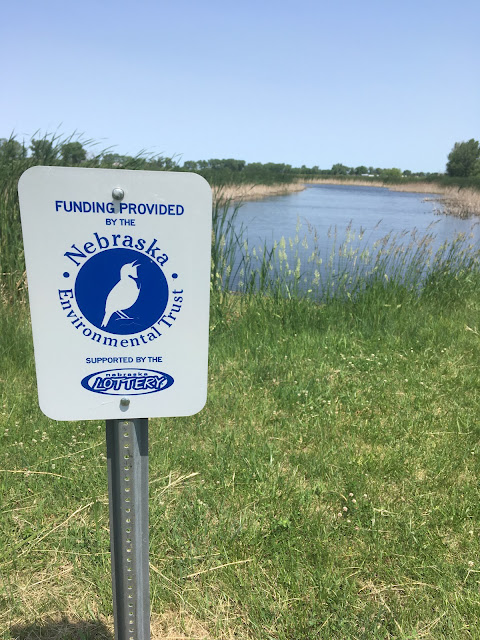 That afternoon I found my eyeglasses.  There was almost tears.
I had put them into the wrong eyeglass case.
All was right in my world after twenty-four hours of anguish.

If you have your old prescription you can order a pair online...don't need a new exam.
Glad you found them though.

Jackie, well you set this new day off for me. I am just sitting here shaking my head at my stupidity. I have my prescriptions. I have ordered online before. I have the name of the company saved. They have my information. It just never crossed my mind at all to order through them. Geez Louise, I amaze myself sometimes!

Oh, I feel ya. I lost my I-phone for about 36 hours. I was just sick about it because it had all my England pictures on it. When I finally did find it, there were tears as well.

Glad you found your specs. And a place to park. Hope the next 24 hours are stressfree, but if they are not, you've always got your readers to set you right.

How about discounts for veterans, only if from "that" state? When I got drafted in 1968 I thought it was for the U.S.A. Not just Washington state.
What a world we live in?......