You may remember last winter while in the desert I took Beans to the animal hospital in Yuma.  She had been coughing and hacking and wheezing.  This is the scene from that visit. 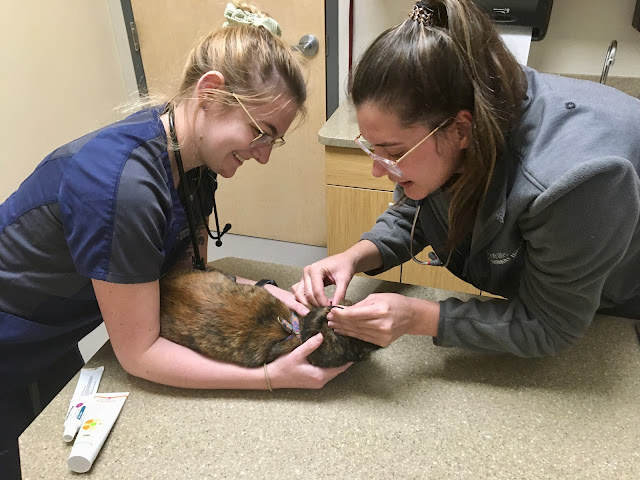 Well a couple months ago her asthma-like condition returned.  I had been giving her an over-the-counter antihistamine suggested by the doctor in case it flared up again.  Well it isn’t working.  We needed to get a refill of the prescription drug that really knocked it out last time.
Selecting a vet while on the road is a bit unnerving.  You don’t know what you are walking in to.  Here in McCook I picked out Four Winds Animal Clinic based on the reviews.  I found it easy enough.  Pulling in I saw no other cars there.  That’s good.  I went in and told the receptionist what we had going.  She said the doctor was in surgery and asked if we could come back in an hour.  “Sure, we are in the RV outside and will just wait there.”  So that was encouraging not being asked to make an appointment days away.
Just shy of an hour later she came out and said the doctor will see you now.
I left Beans in the RV. 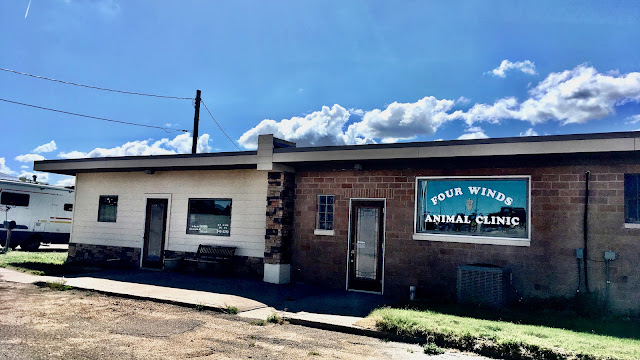 The doc was standing at the counter with his assistant.  I told him what was going on, showed him the empty bottle and handed him the printout of the evaluation from the doctor in Yuma.  While he was reading I noticed this fellow on the floor behind the counter.  He was still out of it from his surgery, a snip-snip job.  So cute.  His eyes were glassy and wide open.  I asked the assistant “Won’t his eyes dry out?”  We put a squirt of ‘something’ in each eye.
I liked their recovery room procedure.  These folks were so laid back. 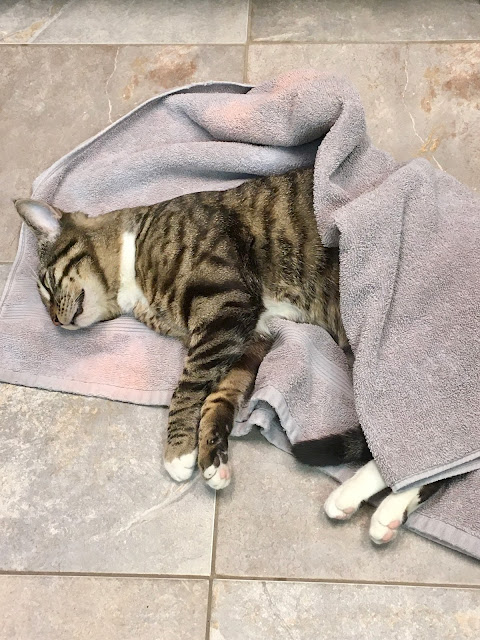 The doctor said “Sure, I can help you out here” and asked his receptionist how many pills they had.  Thirty-nine. “Oh just give all of them to him so he won’t have to go through this again in a long time.”  I was astounded.  Here I thought this would be a procedure involving making an appointment, coming back days later, another exam to put Beans through and whatever else.  With the original prescript we had twenty pills and before ten were used she had stopped with the wheezing.  I still gave her the remaining ten to taper off.  This time he said just to give her one every other day, then can stop when it clears up.
Whew!  I sure am glad I didn’t have to go inside that place. 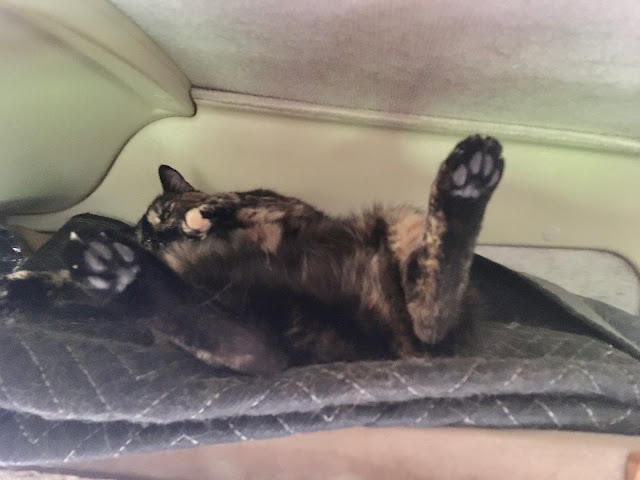 I was equally relieved to have got this over with.

As much as vet visits do end up helping our furry friends...those of the feline persuasion don't like them one bit...except that there is eventual relief. Beans must have been much happier with this method of getting her meds renewed. And that way of taking her pills will probably be a bit easier. Hope she feels better soon!

I'm thinking your documentation of the last visit made all the difference. Smart.

I agree with Jackie and that's why I have everything I've ever gotten from when I first rescued my dog and my two cats. My cats rarely go to the vet and she has everything on file them and my dog too.

I hope Beans is doing better!