My reason for coming to Burke was I had mail sent to the post office there and I knew they had a city park with showers we could stay at for we had been there before.  In fact it turned out that we were one day off from it being exactly one year ago.  Weird.  Unfortunately they were in the process of doing some major upgrades.  The showers were locked. We went to find some shade to sit out the day and would return later. 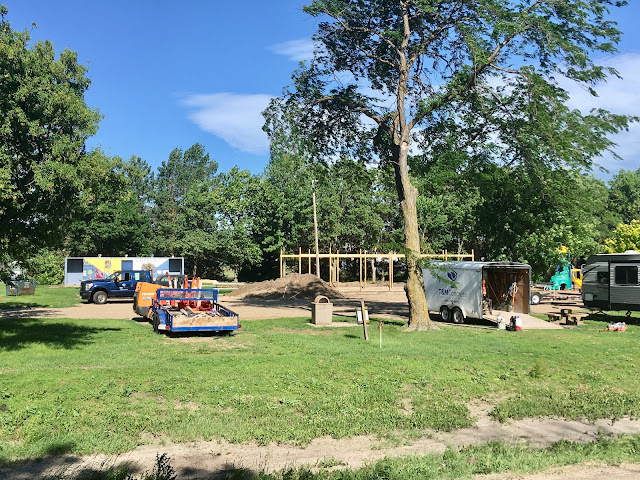 While relaxing in the shade I discovered on Google Maps a State Recreation Area two miles away.  I did not know that was there the last time we were in Burke.  We’d go check it out.
Well it proved to be an ideal campground for the odd price of $11.66. 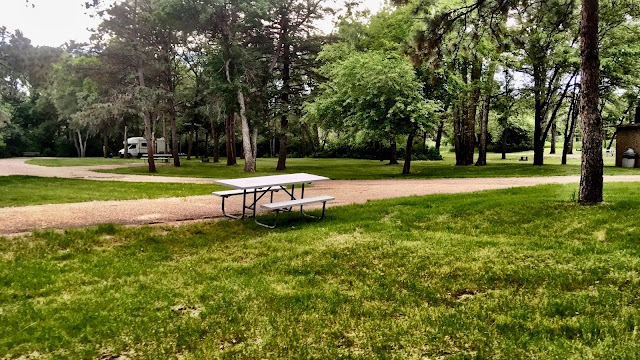 No one else was there.  We had it all to ourselves.  Storm clouds blocked the intense sun.  The low ceiling of clouds muffled all noise.  The air was still, the temperature perfect.  Like in another world. 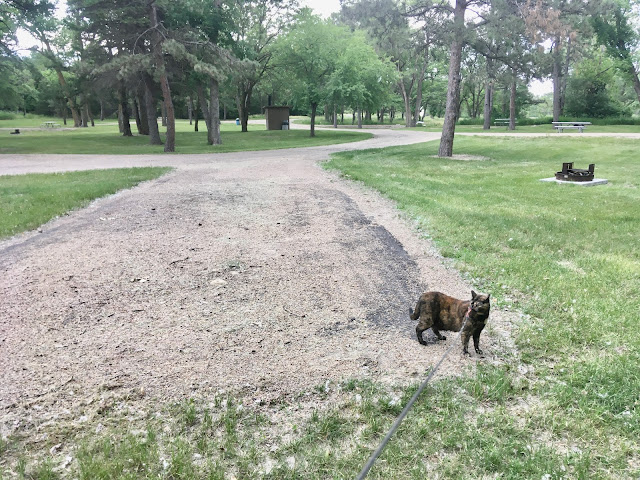 Off in the distance was Burke Lake. 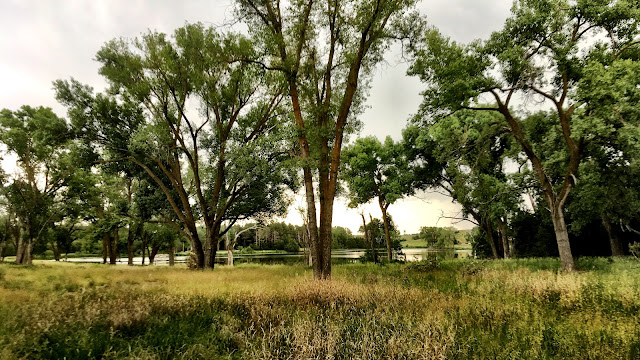 Later this woman rolled in.  I could see trouble.  She had a Noisemaker 3000 generator strapped on to the rear bumper.  Within an hour she fired that thing up.  I put up with the racket for thirty minutes and then prepared to leave.  She shut it down just then.  Whew, maybe she was just microwaving her dinner.  Nope.  She started it up again later.  We left and went to the other end of the park.  10:30 p.m. I could barely hear the thing as I crawled into bed.  I woke at 3 a.m. and opened the window by the bed for some fresh air.  The damn generator was still going!!  Good Lord.  How could she sleep with all that noise outside her window? 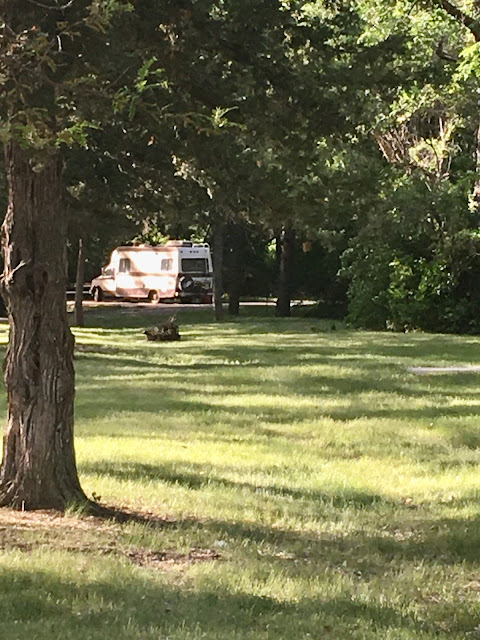 We left in the morning and found a parking area with large shade trees for the day.  We would just move around in the lot as the sun moved across the sky.  We wound up staying there for the night. 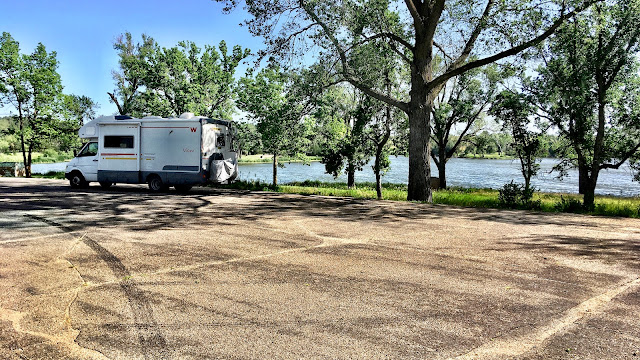 Before that evening we did a drive-through to see if she left.  She was still there.  Now I know she knew we left that day right after she started the generator.  Seeing us drive by the next day she now knew we were still around; we had just left to get away from her generator.
Good!
Well it got better.  When she finally did leave the following day she looked over as she drove out entrance and saw us parked in that lot by the lake under the shade trees.  Now she knew we were still here staying far away from her and her noisy generator.  That she had ran us off.
Statement made!
What could have topped that off was if she had just went into town for groceries, then returned to her spot and found that we had returned to our spot.  Then I could have left again, immeadiatly.
That would have been wonderful. 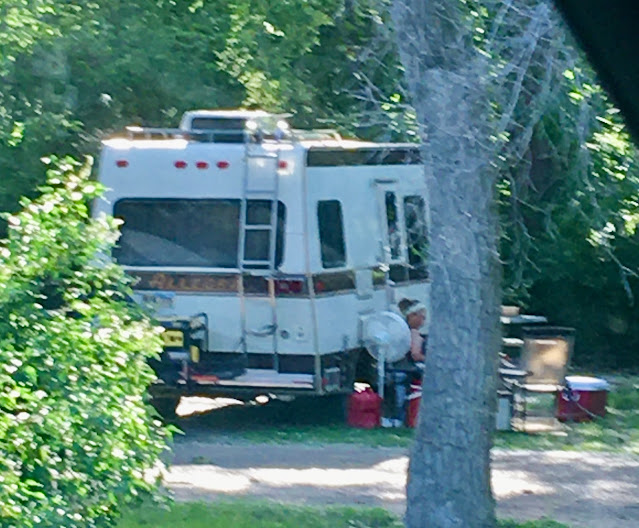 The two and a half days we were in the lot by the lake were high wind days with windspeed warnings of over twenty miles per hour.  The wind blew in over the lake and was very cool and refreshing.
Notice the tree limb on the ground. 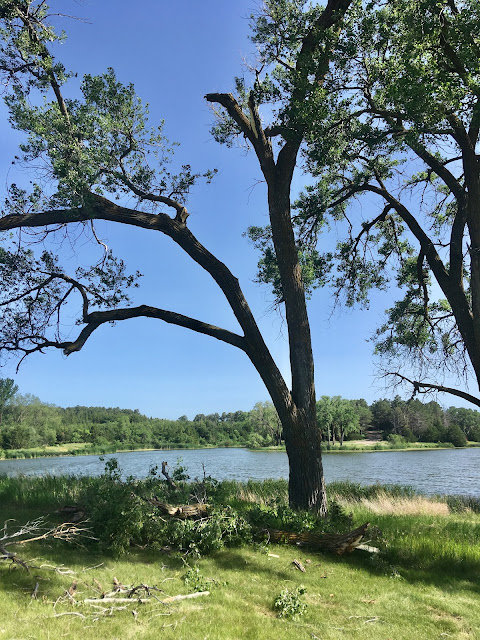 I was sitting at the table and heard a craack!   I looked out and got to watch the limb break away, fall and take another limb with it.  It seemed to happen in slow motion.  Kind of cool to watch.
This made me think of being in the campground under all those trees with the wind blowing as hard as it was.  Yep, I think our lot camp was just perfect. 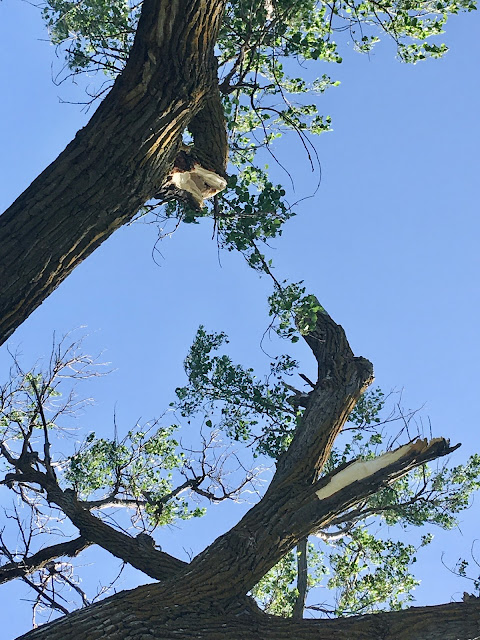 There are some inconveniences in life which we can deal with, and some we have a choice to avoid! You're lucky!