Mr. Bill (donze52) is one of the few YouTube people I follow.  He has been posting videos for about twelve years and I think I have been following him for nearly that long.  He does short videos less than five minutes in length. Mostly he has a story to tell about people and what goes on in and around McCook, Nebraska.  He may share some gardening tips or perhaps the latest gadget that he has found that you could benefit by.  Most importantly the man is all common sense, a rare commodity with many people.

I knew we’d be passing through McCook.  I had been thinking about how nice it would be to actually meet the man I had followed for many years.  Because of clues from watching his videos I found on Google Maps where his house was.  I wasn’t about to go stalking him or even drive by.  That’s just creepy. But it does show just how dangerous the Internet can be.  But when we passed that sign (previous post) I knew of Barnett Park for Mr. Bill has many videos about him fishing there.  I just had to at least see his fishing spot.  So I made that U-turn up ahead, came back and turned into Barnett Park.

Now I knew what his van looked like.  Many videos were shot with him in his candy truck as he calls it.  He sells snow cones and candy to the kids in McCook, all at no profit.  I also knew that he had recently purchased a used Honda minivan but wasn’t that familiar with it.  So I was thinking Wouldn’t be something if I saw him here in the park fishing.  Just then, off on a side road to the right came a tan Honda minivan that paused then turned in front of me.  My God! It’s Mr. Bill!  I cannot believe this.

Although seeing Mr. Bill was such a pleasure for me I know it means not all that much to anyone else. Most importantly for the purpose of this blogpost were the long list of side trips, delays, and just fooling around I did that morning that resulted in perfectly setting up the exact moment in time the two of us would meet in passing on that park road; a meeting that so easily could have been missed if off by less than a half a minute difference of us traveling that exit out from Barnett Park.

Life can be so strange at times. 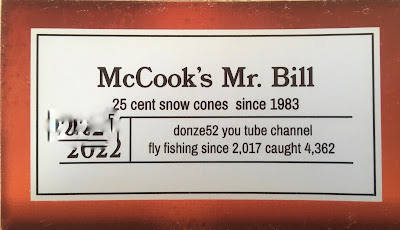 Below is a link to Mr. Bill’s account of that serendipitous meetup.
https://youtu.be/noPwsbc-Yeo

I enjoy following the exploits of you and Beans as you trek across America. However, your admiration for Mr. Bill has me questioning your quirky moderate stance. Mr. Bill does not believe in global warming, has no sympathy for Californian fire victims, claiming lack of firefighting ability, arson and not carrying a spray bottle in my truck for the devastation. I'm finding it hard to, "agree to disagree" with such ideas. He is just uninformed on so many topics it's scary.

I also try to give everyone a fair shake, but in today’s times, selling candy and sno-cones to children out of a van at the park is somewhat creepy.
Jeff Fara

What struck me as I listened is that he talked a lot about how excited you were to meet him, but, had the man asked you a question or two, he would have been just as excited to be talking to you as you were to be talking to him. Mr Bill missed a huge opportunity there.

That's a hoot and a half. Yes the cosmic coincidences that happen are truly amazing! Glad you finally got to meet the man in person!