After my brief visit with Mr. Bill he went on his way to take care of the list of Honey-do’s he had been given by the little woman.  I decided we’d just spend the day at the park. 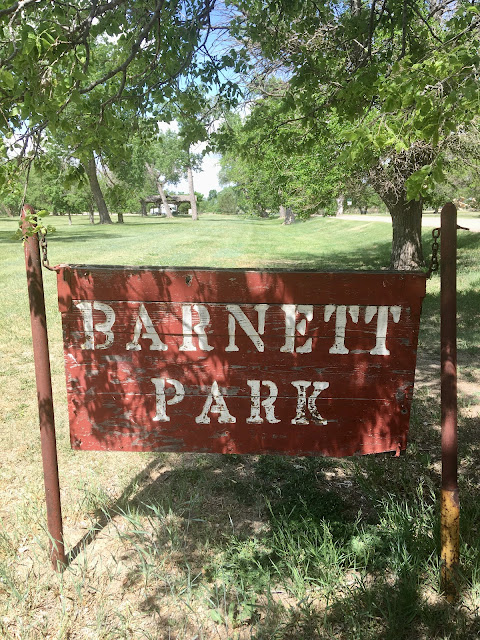 I think this might be one of the spots Mr. Bill fishes at.
It looked familiar from his videos. 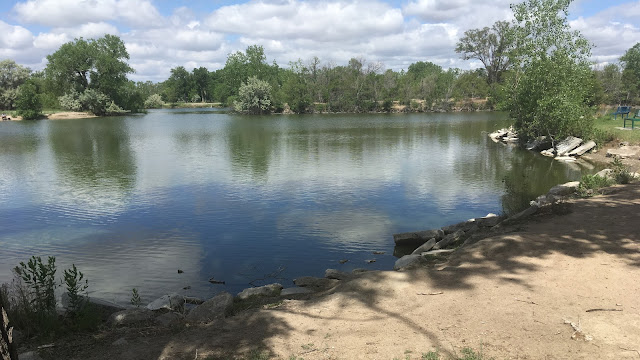 A snake swimming.  I think it is so cool seeing snakes swim. They are so graceful.
He knew I was there and kept an eye on me. 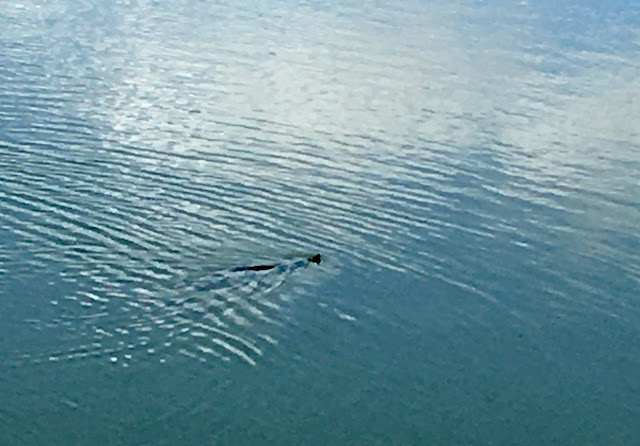 The adjacent lake was where all the Canada Geese hung out. 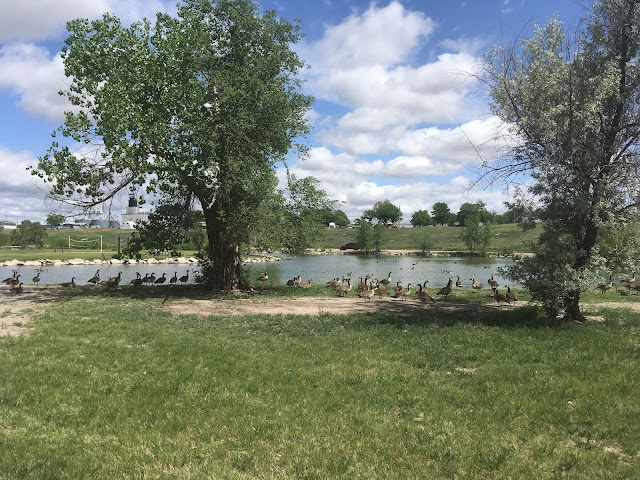 This old guy had a large fifty pound bag of cracked corn sitting on the passenger seat of his car.
He was scattering corn around for the geese. 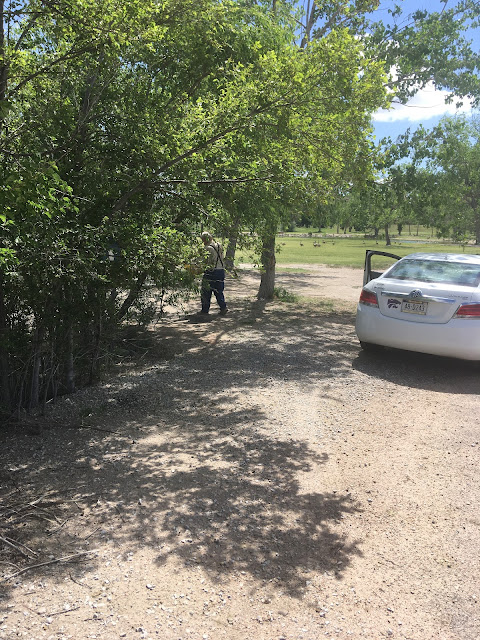 He had just finished filling this bird feeder with bird seed.  I asked him how many feeders he had at the park for I had seen a couple already.  Fourteen.  Mr. Bill by the way told me he had just come down the park that morning to dump several hundred baby blue gill fry into the lakes for the kids to catch when the fish grow up.  The Birdman and Mr. Bill do this all out from their own pocket money. 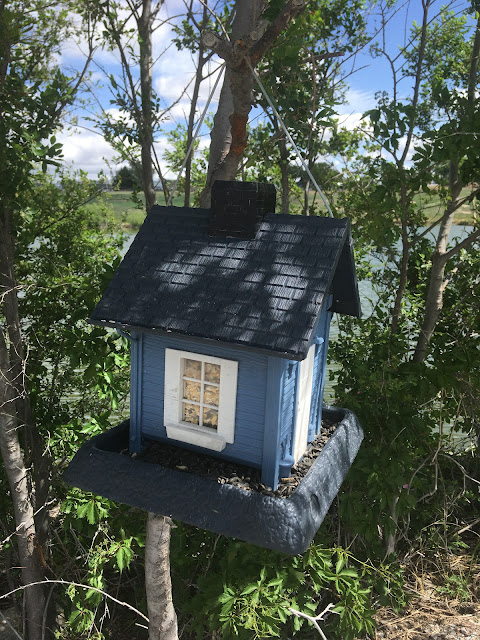 This park received a lot of activity compared to other city parks I have shown on the blog.  Granted, McCook is a larger town with a population around 8000.
The usual modern playground equipment. 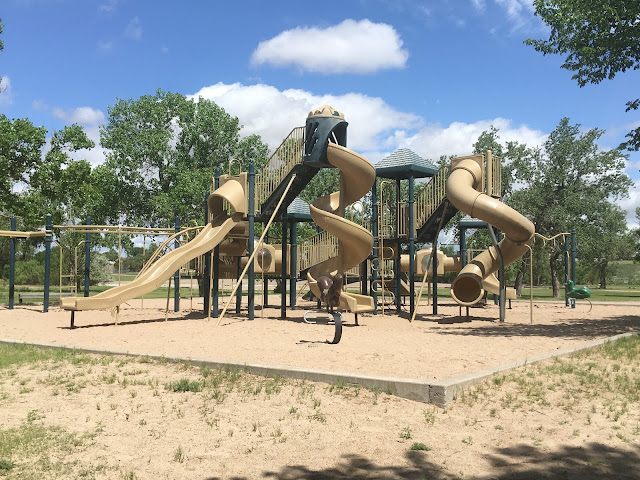 Ah, but McCook had a surprise for me.
I cannot remember the last time I saw the old hot as a stovetop steel metal slide guaranteed to blister your backside on a hot summer’s day.  You had to throw sand up onto the slide just so you could actually slide without leaving a layer of skin behind.  Eventually you gave up and found trying to climb up the slide was more fun and less painful. 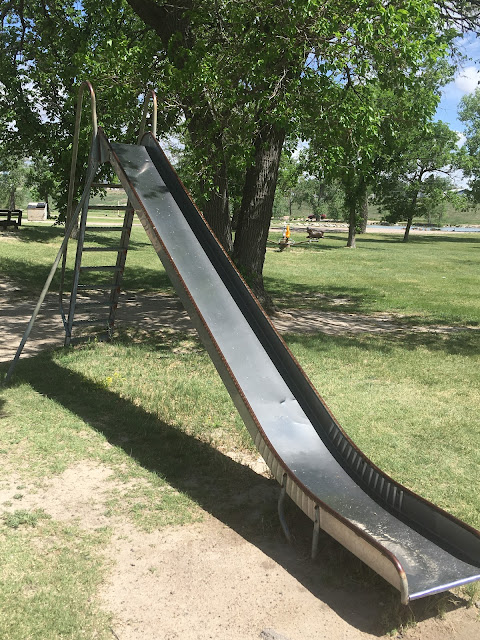 Then I found this.  My goodness, these things were banned in California decades ago.  I can remember kids falling from monkey bars and showing up at school days later with a cast on their arm. 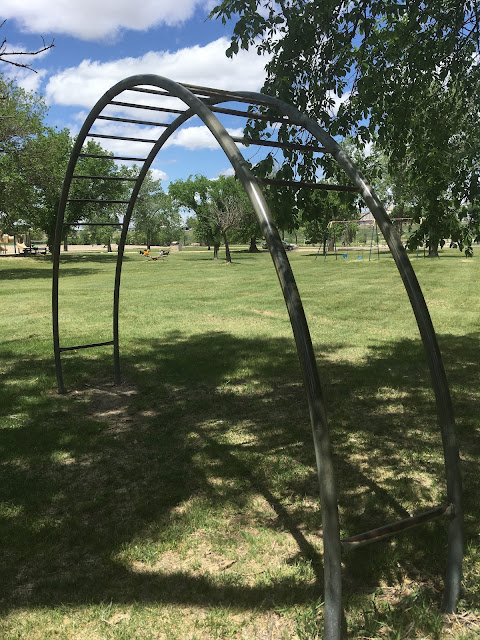 This is really what I had hoped to find but wasn’t there.  Remember packing this with a bunch of kids then get some big kids or adults to spin it around at high velocity?  It would go so fast it would eject kids from the sheer centrifugal g-forces generated.  You would try to hang on with your feet and legs dragging dangerously close to the narrow gap beneath the spinner-go-round and the ground until it slowed to a stop. You then found yourself so unimaginably dizzy it was impossible to walk in a straight line eventually giving up to collapse on the ground, the world spinning nauseously.
Great fun which made us of our generation strong to this day. 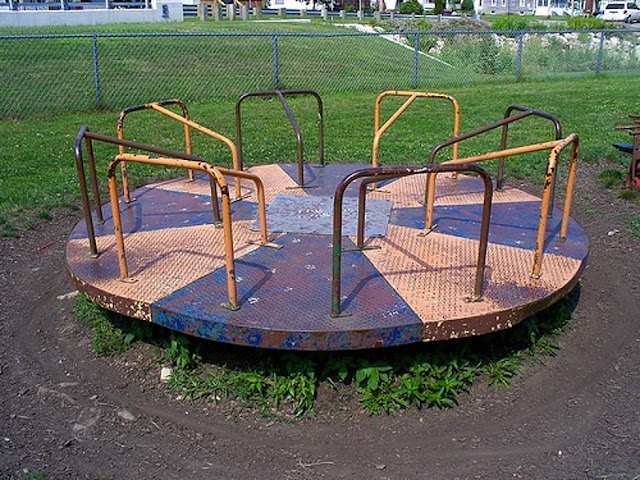 And no grass is growing around that last torture device on the playground! I sure do remember hours spent taking turns on slides like that...though our jungle gym was a tower not an arch. We even would bring some wax paper to speed up the slide. Of course we girls wore skirts, so would be sure to tuck them around our exposed skin. I landed on my keester the first time after the wax paper treatment...flew through the air!

We would beg our parents for the waxed paper the bread came in to use on the slides! The merry-go-round was the favorite. All the kids would be on the edge while someone ran on the ground to get it going. On a signal we'd rush to the center and back out again--the speed that thing would spin at was so fast it was wonderful. I don't remember anyone ever breaking an arm on the monkey bars but the girls would wear shorts under their dresses to preserve modesty when hanging upside down by their knees. My only injury was as an adult when I tried to hang upside down. My legs couldn't hold my weight and I fell down on my head and sprained my neck. It was fun explaining that to the doctor!

The ultimate danger was the maypole. Did you ever have one of those? Looking them up, I discovered they were called 'The Giant Stride'. We always called it the maypole.

Kids flew off of that! Blood, crying, even broken bones. Justified having a school nurse, that's for sure.

I don't remember sliding down the slide much but I loved the old Merry-Go-Round.

A Maypole is a painted pole, decorated with flowers, around which people traditionally dance on May Day, holding long ribbons that are attached to the top of the pole. My mom was the Maypole Queen at her high school two years.