You may remember the two solar powered bicyclists from Switzerland we met while in McCook, Nebraska.  They just recently updated their blog.  Seems they do so once a month.  Anyway, they mentioned their stop in McCook.

At one point we found our self camping at the Mccook city park as a huge thunderstorm was approaching. Luckily for us the thunderstorm went just around us and only strong wind nearly ripped our tents apart and we could witness lightnings from afar. After it passed we thought that was it for the night. Little did we know the worst was yet to come. Just when we were on the edge of sleeping (pretty exact at 10pm) we got hit by a huge burst of water with so much pressure that the tents started to bend. The strange thing was it was clearly coming only from one side and not from above. After a quick investigation the cause was found. Sprinklers that popped up everywhere on the campground. To this day I wonder who would install hidden sprinklers on a dedicated campground that pop out and go off at 10pm when everyone is in their tents for certain. Luckily for us we didn’t put our tents on top of one of these. We fixed them by covering them up with our water bottles and had a pretty peaceful night. 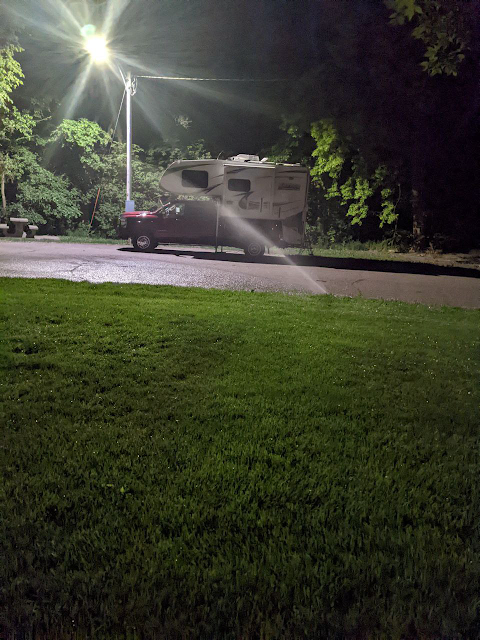 Darn, we almost made it into their blog.  We were parked to the left in this photo.
I left a donation for the park when we left adding a note inside to “Put this donation towards making a sign about the sprinklers coming on in the middle of the night.  Two bicyclists from Switzerland got soaked.”
The day they arrive to tour Yellowstone the park shut down due to the flooding.
What are the chances of that happening to them on the same day?
They are in California now waiting on their flight in July to take them across the Pacific.

What rotten luck to miss Yellowstone. So they're going across the Pacific next...should have some interesting stories there!

What a pair of adventurers! (Of course, you KNOW I'm talking about you and Beans~)