We left our overnight spot behind the City of Flaxton storage shed for the Burke County Fairgrounds a mile and a half away.  It would be quiet and we could spend the day there.  We passed by some wetlands full of waterfowl of all sorts including mosquitos no doubt.  Upon arrival at the fairgrounds we both got out and were immeadiatly attacked by mosquitos.  I never got to explore around the decaying ruins.  I could tell the fairgrounds had not been used in years. 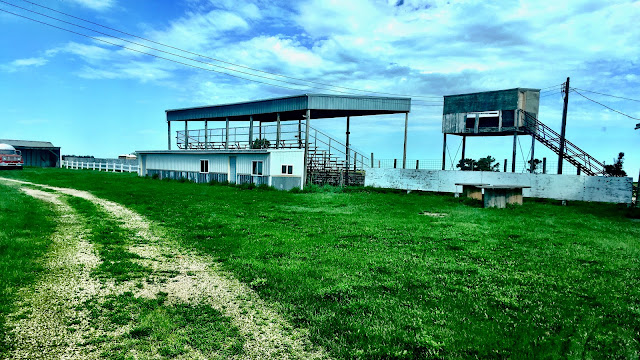 We went back into town.  The satellite image on Google Maps labeled this building to be the Flaxton school.  It was boarded up.  Only a small white door at ground level noted the Senior Center. 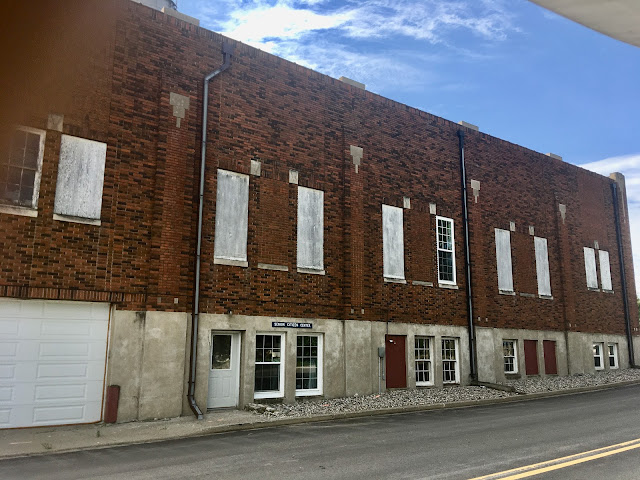 Around in front sat a pair of machine guns on pedestals.
Words over the entryway read: Burke County War Memorial.
Images online showed it to be the high school.
Nope.  The front did not match that on the sign out front of the auditorium. 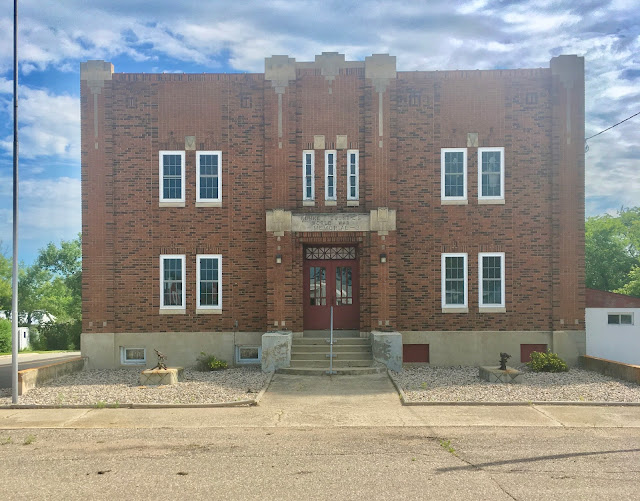 We drove ahead and found an abandoned basketball court and a possible school bell. 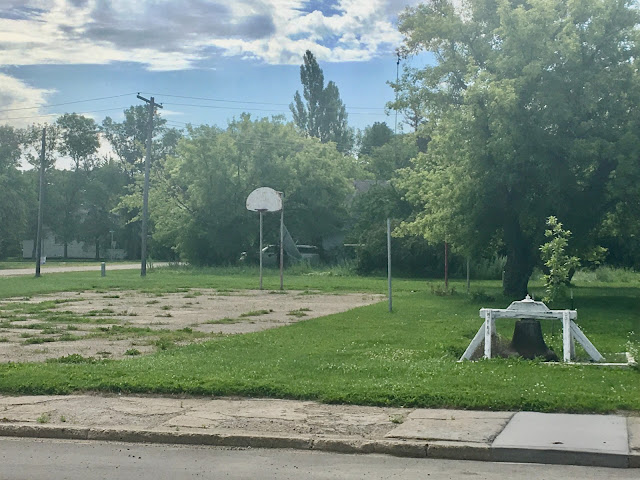 Next to it this. 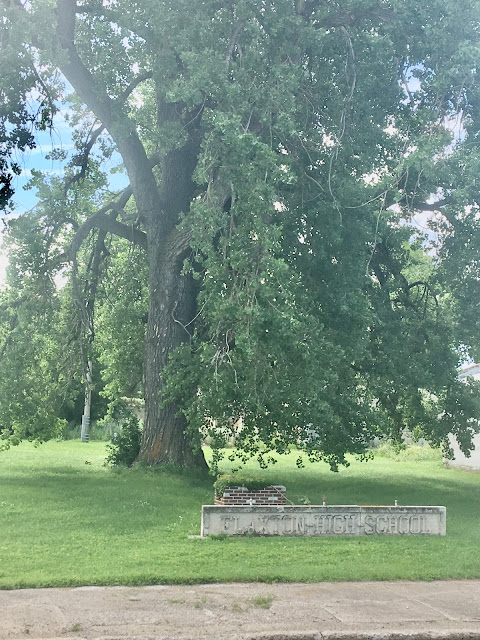 I had found the high school site and all that remains of the building - a corner stone of bricks. 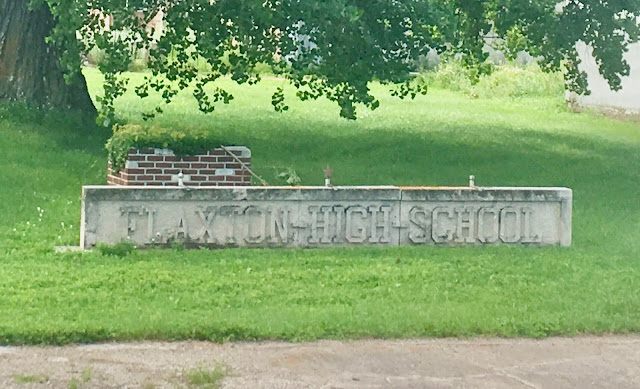 This setting I felt pretty well matched the black and white photo from 1953.
It is my belief the auditorium was built in the fifties or sixties (it had that architectural style to it) and all activities were held there a half a mile away from the school itself.
Nothing ever stood in that grassy field in front of the auditorium. 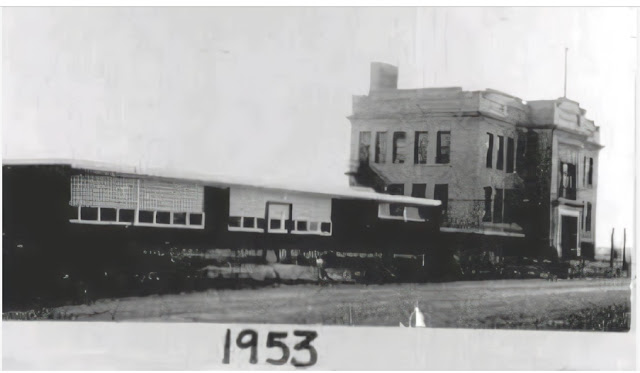 The north side of the street and looking down the business district.  Only one business was still in operation.  There where the truck was parked.  It sold parts for wells and pumps. 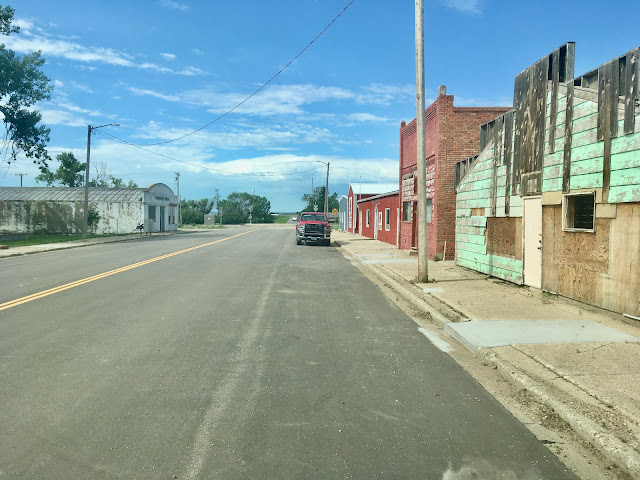 This is the camp spot beneath the water tower designated on my free camping app. 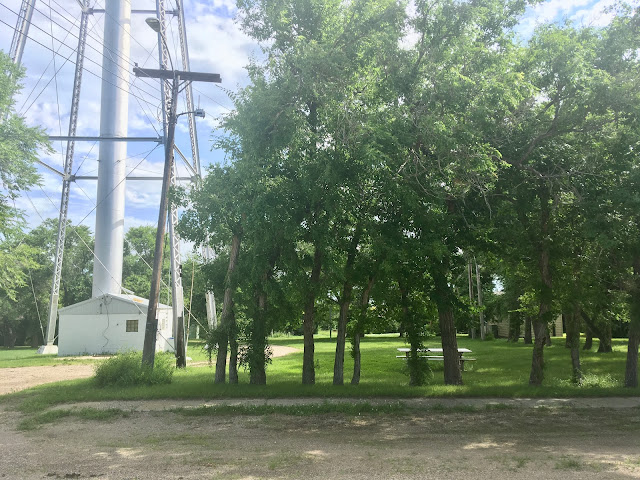 Two reviews were left.
Becky wrote:
Maybe if you have an RV or are deafBecky on April 26, 2018

I would not stay here in the future.

No off-street parking, no bathroom, 1 picnic table, no BBQ, no hookups, and I doubt a tent would be welcome.

I slept in my car, parallel parked on the street and was woken up numerous times by the train horn as they come clattered past. I gave up on sleeping after 6 hours and continued down the road.

If you're hard up for a site it's ok.

There is a campground, or park, but it's right in between people's yards and directly under a bright street lamp. I showed up pretty late and I'm tent and or hammock camping and I didn't fully feel comfortable to be there. But if you're hard up for a spot it's ok.

Stayed here with a passenger vehicle and a tent. alex Nemet would not stay here again.

And that is why we stayed behind the City of Flaxton storage shed.
A side note is that while we were at our spot in the later afternoon a woman rode her tractor lawn mower to where we were.  She spent hours mowing grass around the area finally stopping at ten p.m.  The next day going the fairgrounds we saw her again at the north end of town mowing grass.  I bet that is all she has to do living in Flaxton - mow grass.  Plus it gets her away from the old man too.
I don’t have a photo of her or all the area she was mowing but it was a huge expanse of grass to the left all the way down to the roadway.  She evidently had just recently mowed the area behind the building and to the right before we arrived.  You can see grass spewed out onto the dirt. 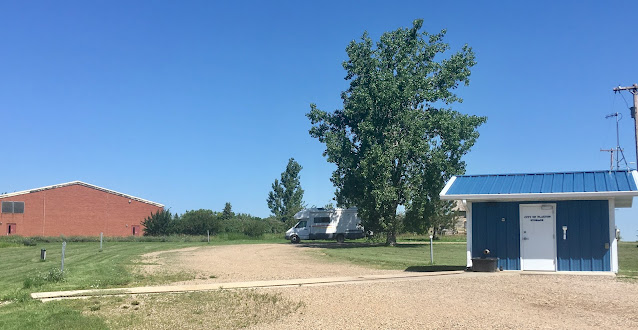 Amazing that they used to have enough teenagers for a high school!

I remember you said you had been in a town with a population of 67. This town seems even smaller than that. O think of that woman mowing grass hour after hour to beautify a place hardly anyone sees.

John...She could have been getting away from the old lady too. (;+)..Or her grandkids...etc.
I like to mow, just zone out and enjoy. Thinking of all the skeeters I'm mowing..Heh-heh-heh...