The window on the back of the RV is an emergency escape window and not intended to be open all the time.  There is no screen on it and the only way to keep it open is to prop it so with a stick.  It is nice to have open on hot days if the breeze is coming from that direction.

Now little Ms. Houdini knows she can step out the window, onto the spare time, the motorbike bike and then jump to the ground.  She’s done it before a few times.  I’ll not go into the anguish her little adventures have caused me.  They are well documented in the eBooks.

I have come up with a way to affix a screen on the inside to keep flying insects out.  It is not cat proof. 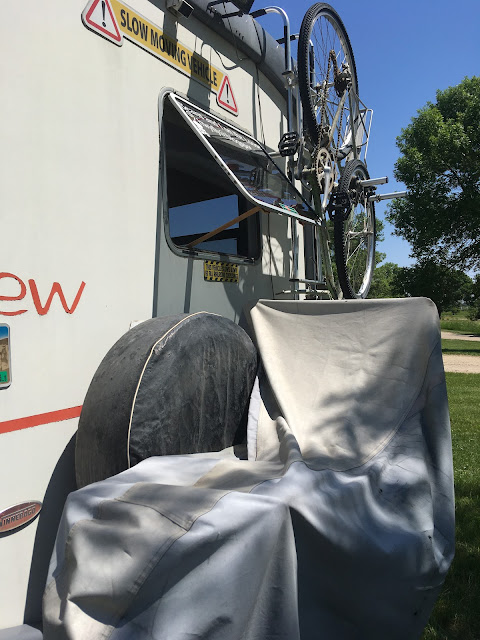 While in Jamestown this became a project; find some type of wire mesh and adapted it to fit into the window.  I went to big hardware stores but everything I saw that I had in mind to work came in a way that I would have a lot of waste left over.  It was while in Target I got the idea that a cooling baking rack might work.  Back at Walmart (better price) I bought two.  Now how to put them together and make them sturdy within the window.

I made a long stick and a short stick years ago early on when I bought the RV.  Sinbad never showed any interest in going out.  Such a good boy he was.  Not to say Beans is bad.  She is a good girl and such a sweetie.  She is just more adventurous. 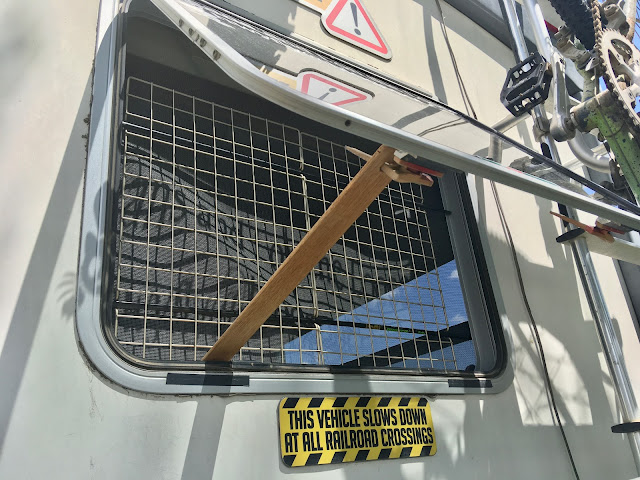 What I came up with were two arrow shafts cut to fit.  The upper arrow fits within the window frame and the lower arrow sticks just outside the frame on each end.  Together with them slipped through the little feet of the cooling racks binds the two together for a tight fit.
The end result was better than I had hoped for.
She will not bother trying to get past this. 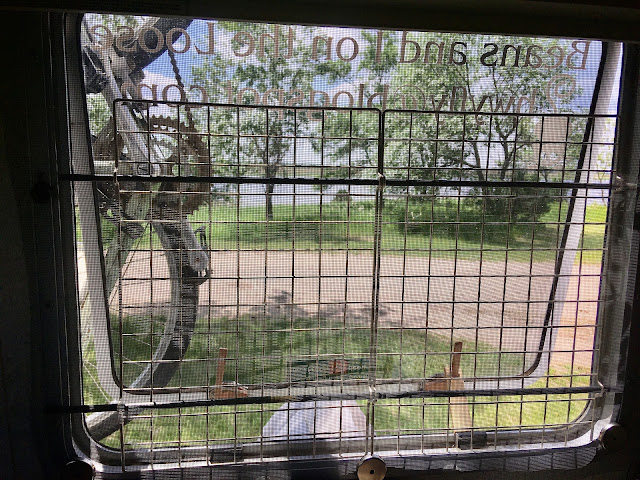 Pretty inventive.
Just noticed your blogger address on that window...

Wow, You Is Smart! Looks pretty good too :)

Like I always tell my grandson: every problem has a solution. Good thinking!

Kool Kitty-Kat screen!
This is maybe the 1st time I've noticed your "I'm not moving at the speed of light" notices on the back.
I just got back from a 120 mile ( one way) and back camping trip.
I-90 in Washington is in really rotten shape.Only 2 lanes and everyone driving 70-90 mph. They try to run this old dude and Winnebago off the road. I doubt a sign on the back would help, idiots, in a hurry to nowhere that important. Says I....
I hardly ever pull over anymore in the turnouts, they won't let you back in and some expect me to totally stop and wait for the 3rd coming..(;+)....
Your roads look much more relaxing, except for the wind. Never a tailwind.