We left the Harvey campground very early in the morning before any train horn blasting began and also to beat the high winds predicted for the day.  Our next town would be 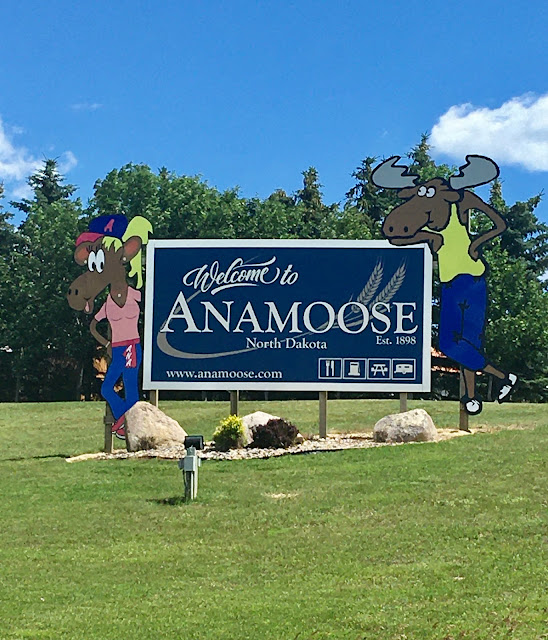 Anamoose, population 230, and only sixteen miles away.  They had a small campground (three spots) in their city park.  You can see us way back there in the center.  This was so much nicer.  We had shade, no highway traffic and best of all the train tracks were nearly a mile away.

Now I will add that the horn blowing still happened here in Anamoose but it was far removed.  One train engineer did just a few toots and that was it.  Another train engineer laid on the horn  throughout the entire time passing by the town.

I have come to a conclusion about the horn blowing: Its just the fact that some train engineers are simply rectal orifices. 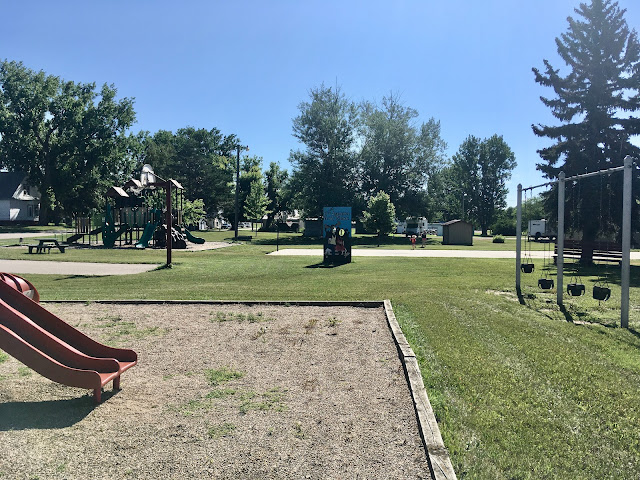 A little free library box in the park.
I love the saying. 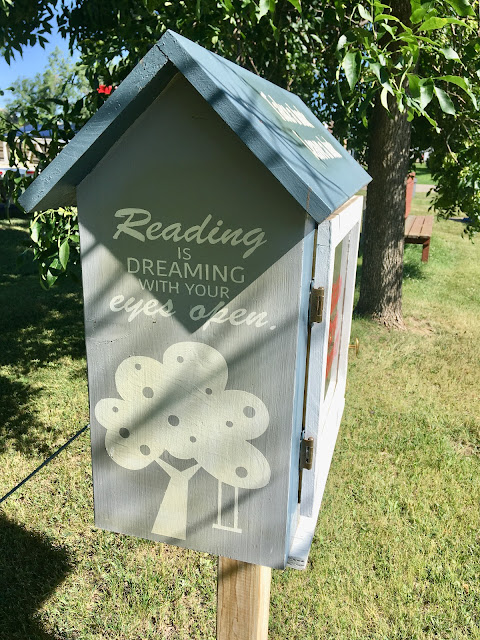 I took a walk down their main street.
It was a short walk.
Not much going on. 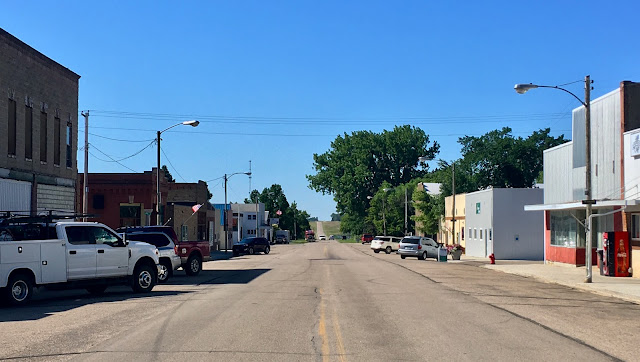 I did notice an interesting looking home. 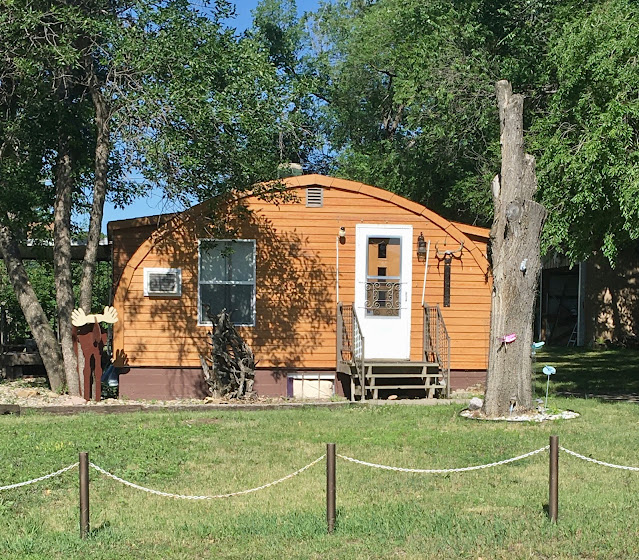 I just love these small towns that have no sidewalks, curbs or gutters.
Anamoose streets are paved though, unlike those in Taylor, Nebraska.
Taylor still remains my favorite small town. 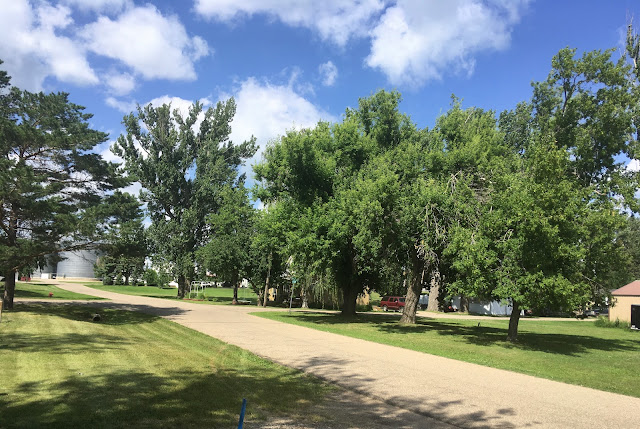 Anamoose is a corruption of the Chippewa Indian word uhnemoosh which means “female dog”.
I think someone could have chosen a different Chippewa word with a better meaning. 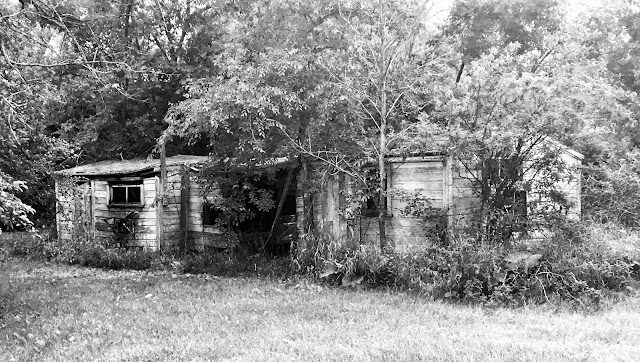 - comment reply -
“Does Beans seem to sleep through all that train racket?”
No.  I don’t know any living thing could unless they were absolutely deaf.  Beans will generally ignore it unless we are too close and then she will dart down into her hidey-hole.  She can go into the space between her litter-box cabinet and the passenger door then get around onto the passenger floorboard in front of a crate full of books.  I suspect she has discovered that space is most protected from loud noises. 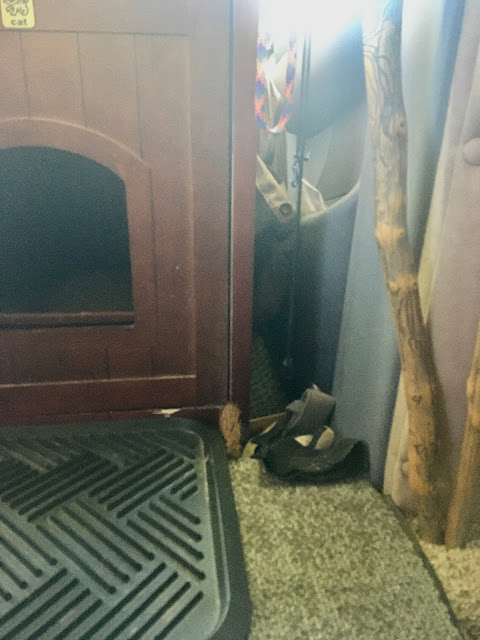 When she gets in there and in front of the cabinet the only way I can see she is there is by using a flashlight and looking down into a narrow gap beneath the dash glovebox.
Posted by John @ Beans and I on the Loose at 10:00 PM

That house looks like an old quonset hut. It would be interesting to hear how it came to be.

This is going to sound like the dumbest question ever, but I'd like to see how Bean's litterbox cabinet works. It looks like a very well designed way to keep litter being tracked all though the camper.

Sorry. I was reading about Anamoose, to see if it had a military background that would account for a quonset hut. I didn't see anything about that, but they did have a town blog. They tell about a storm that "ripped the roof of Roy Irish's quonset hut". I wonder if you were looking at that very place.

Glad you had a quieter night!

My mother grew up in Anamoose. I grew up in Butte, ND. Ask around town where the stone walls were built by the CCC south of town. My grandfather helped on those. I hope you will check out the homemade lunch offered in one of the main street buildings in Anamoose. Cheap and good. Homemade bread. Local dishes.
Coming from the Midwest, I am enjoying your blog.
Kathe

I love those little free libraries. I tend to carry a few preLoved books in my car to add to the selection when we see them.