We Hit a New Low

Or so I thought.

Their sign pretty much said it all for Noonan. 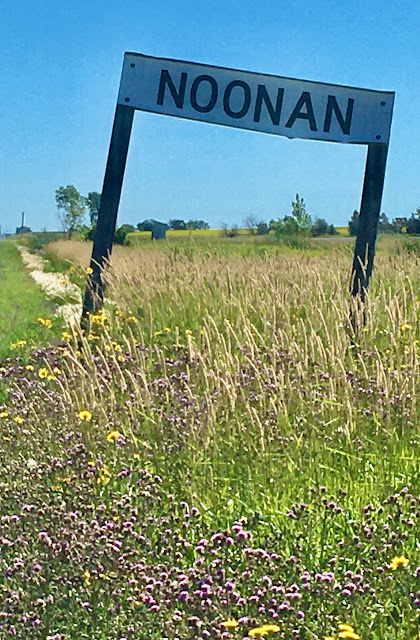 Noonan really looked like a town of a lot less people than 127.  I only pulled off after eleven miles from Columbus just to check out the camping at a “county park”.  It was a dirt lot behind the abandoned school (yeah, another one bites the dust).  It did have water and electric but that was it.  No shade.  Definitely not worth $15.  Too early to stop anyway and we had some shopping to do. 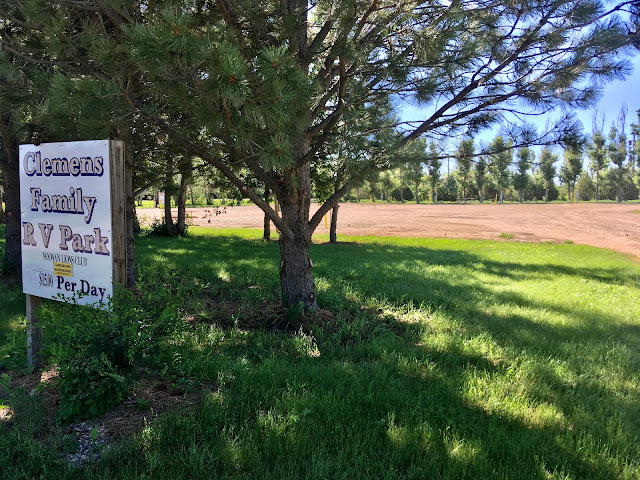 I went to leave town on a different dirt street that we came in on and right there across the way from the “county park” beneath the water tower was...(you can see us through the trees) 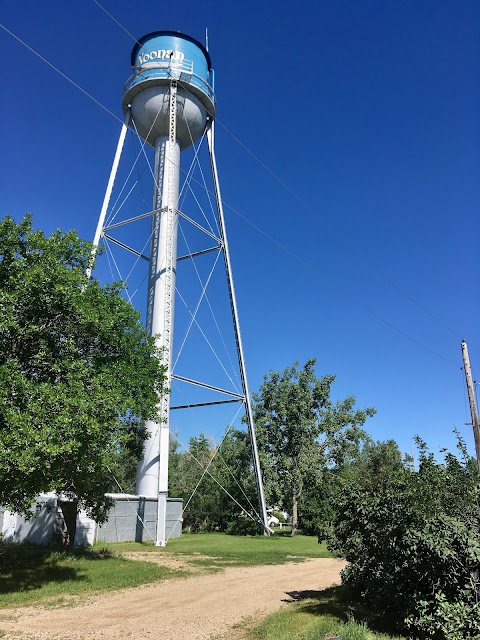 ...the city run camper park complete with hookups, restrooms, tables, shade and at no cost!
Whoop-de-doo!
Shopping can wait a day or two.
Both photos were taken standing in the same spot. 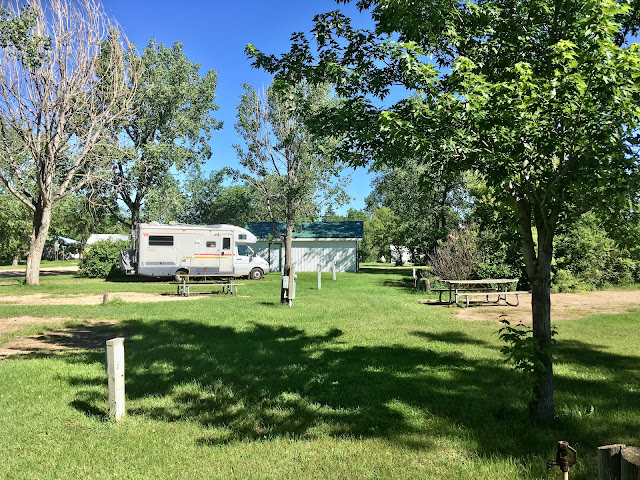 I took a walk down Main Street.  You talk about “bleak” Billy, Noonan has it. 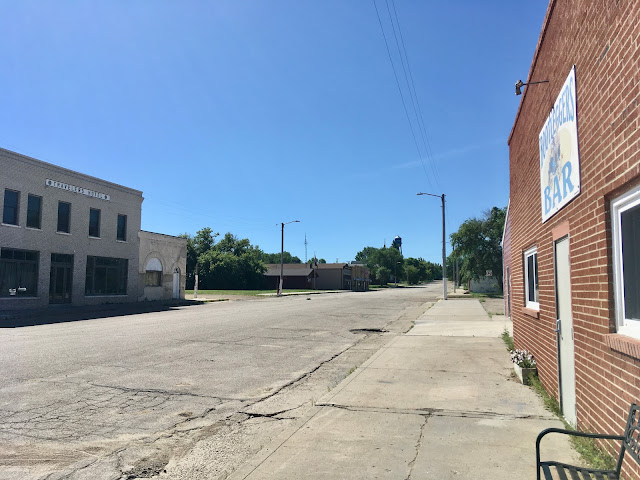 Not a single business was still in operation except for the Bootleggers Bar in the above photo and the tavern in the far right right of this photo right across the street.  I could see each had lights on inside.  It seems that living in Noonan required two bars in order to cope.
Although it was too early to be open yet they both appeared to be operational.
That is the fire department to the left.  It was in business if there were to be a fire somewhere.

Across the street from Bootleggers was the Travelers Hotel which appeared to be in the works of some remodeling inside but to me it had the appearances of a private residence upstairs and maybe the making of a coffee shop or eatery downstairs...or they just gave up. 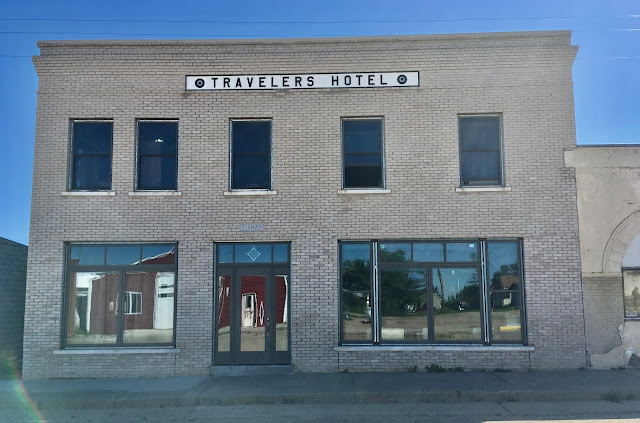 On the other end of Main Street was the front of that school.  Unlike all the other towns so far Noonan  has repurposed the school as their city hall, community center, American Legion Post 243 and telephone company.  It was a more modern building than the other school houses so maybe it didn’t have “issues”. 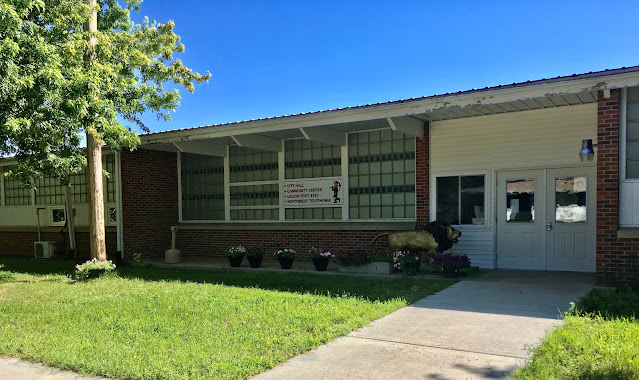 Later I found this photo online.
Wherever this is or was I surely did not see it. 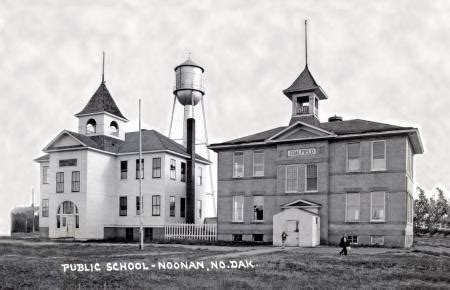 I did see this building which online puts it as their school.
I thought it was once the bank. 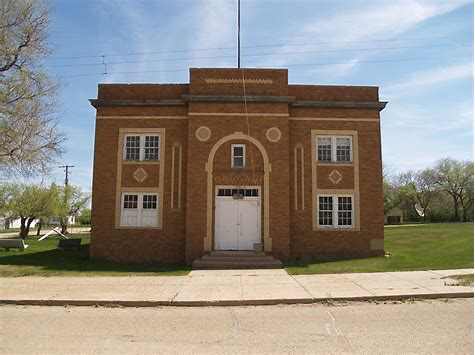 Across from where we are is their city park and playground. 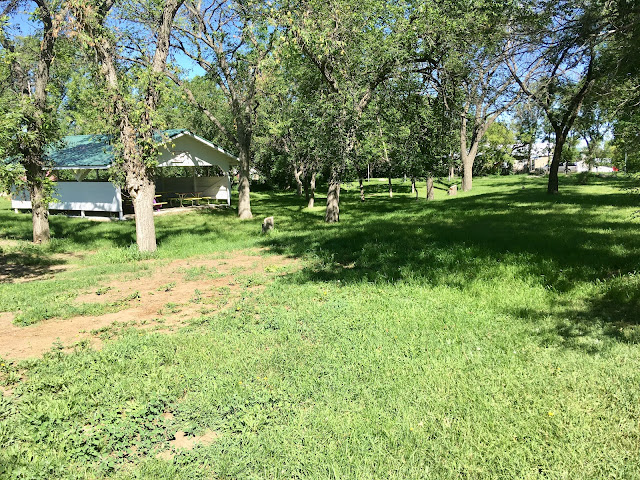 As you can see in all of these photos grass cutting is not a popular pastime in Noonan. 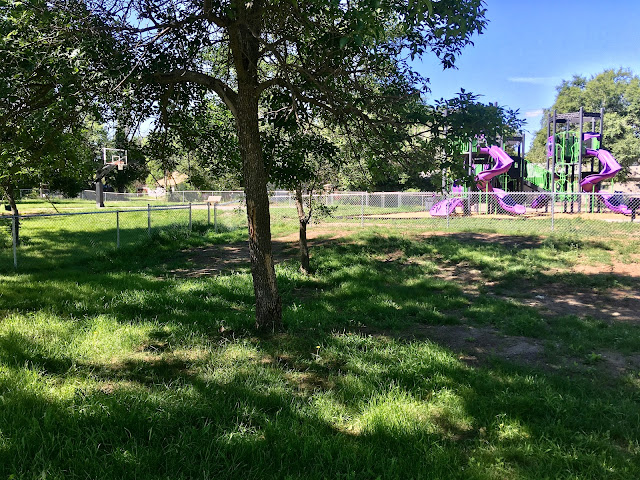 In looking up the population for Noonan I discovered in March 2014, news reports indicated that the town included an illegal dump of radioactive mining waste.
We decided to leave the next day.
But there were no mosquitoes in Noonan.  The radioactivity must have took care of that problem.
Noonan was a nice place to stay and I shouldn’t be making fun of it.  In fact we almost went back after doing the shopping in the next town up the line but we lucked out on a place to stay in Crosby.
I was just funin’ you about the sign.  They had a nice sign out by the highway. 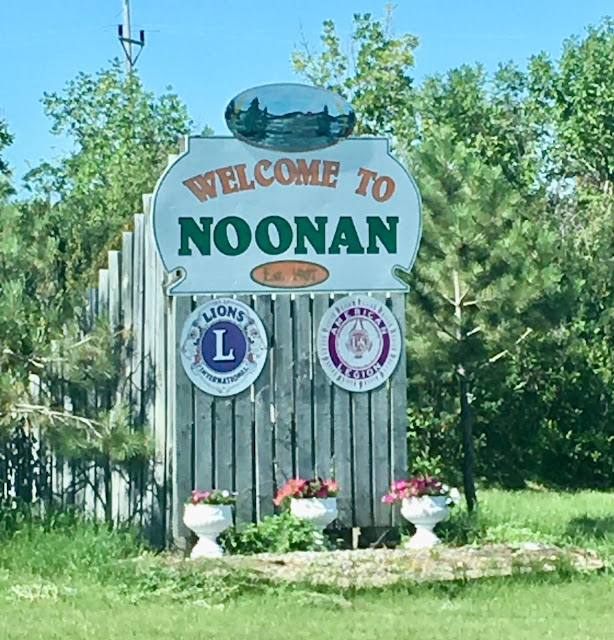 It's funny how the drooping Noonan sign kind of fit the mood of the town.

All these small towns seem to have nice playgrounds. I like that.

Rumor has it that mosquitoes are immune to radiation.

I guess I'll have to wander down the road to Hanford, Wa. and bring home a dumpster.
Those bloodsuckers are still chomping us.
Anything is worth a shot.