It was here that the free camping app stated that one could stay for free. 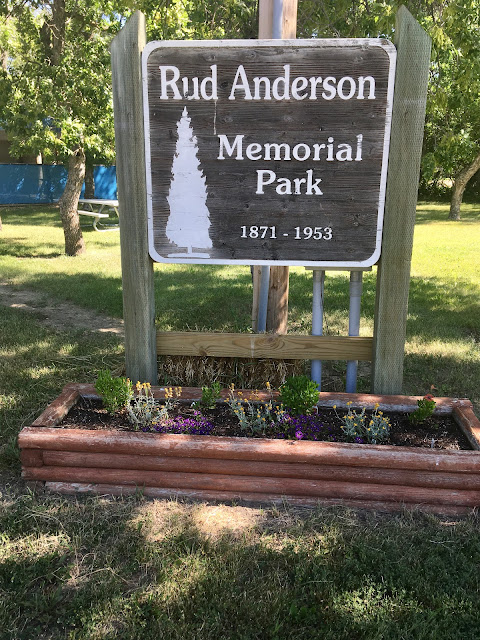 It was heavily wooded so only a car or tent could actually camp in the park on the grass.
An RV would have to park along the road which was suggested.
An electric plug-in was behind the sign. 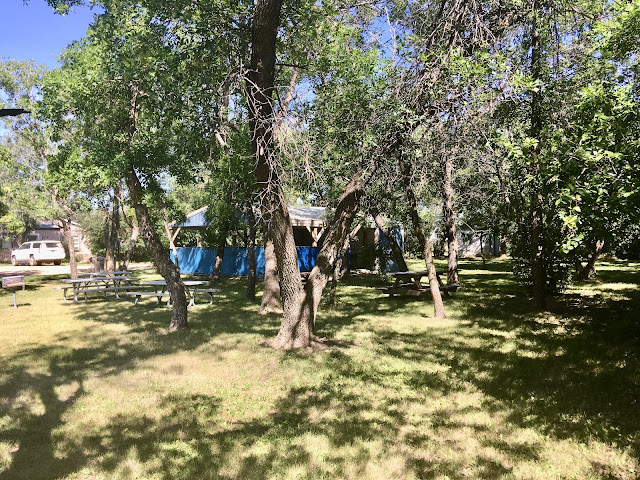 They had a covered area for gatherings... 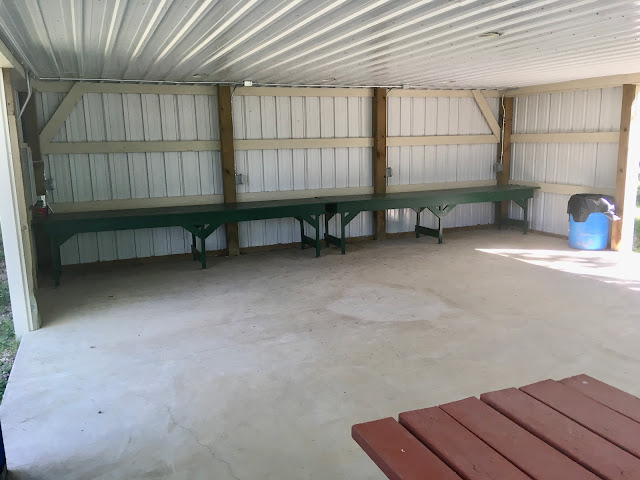 ...and such that the townsfolk may want to have. 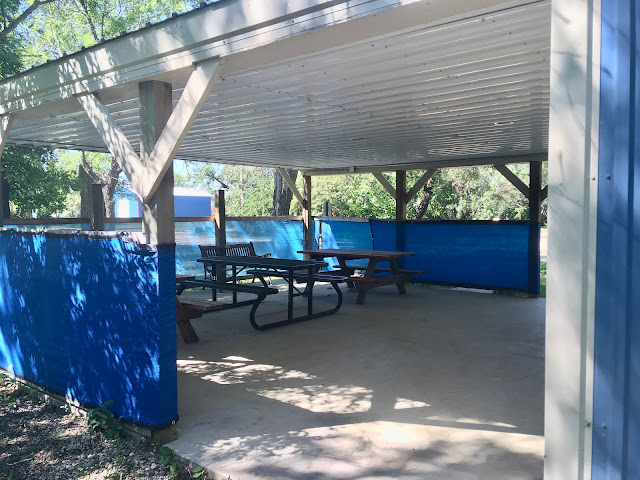 There was a restroom. 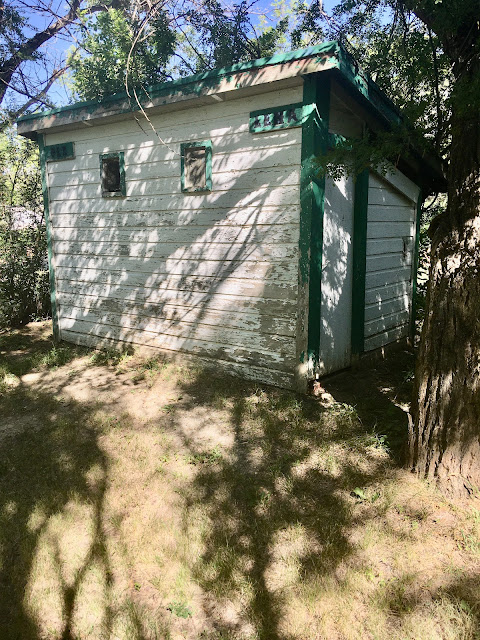 An old fashioned style of outhouse.
This was the ladies.
Made you think of spiders didn’t it? 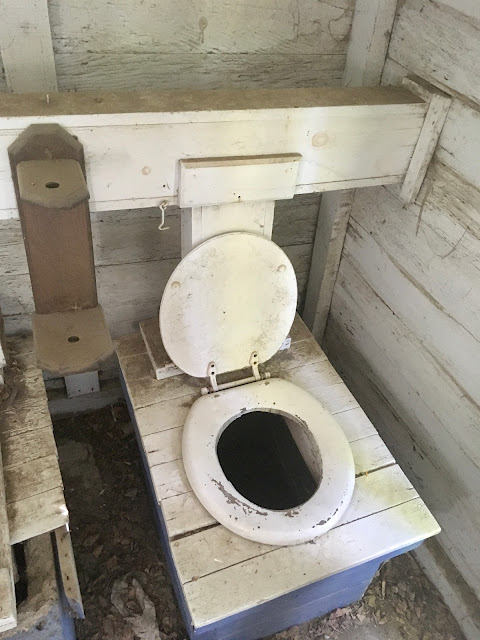 The mens didn’t get a seat for they can’t remember to put the seat down when finished. 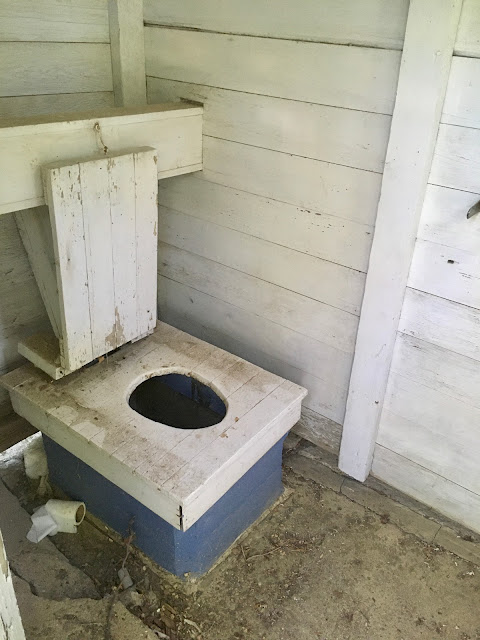 The next block over had a prehistoric children's playground.
I had been wondering if there were any kids in Ambrose for I never heard or saw any.  One day the Sheriff came by.  Yep, someone called the Sheriff on us.  I think it was more of a welfare check to see if we were okay.  No one has ever stayed in Ambrose as long as we have I guess.  Someone got to wondering.  Anyway, after I checked out for not being a wanted fugitive we had a nice visit.  I asked and he said there are a couple kids still living here. 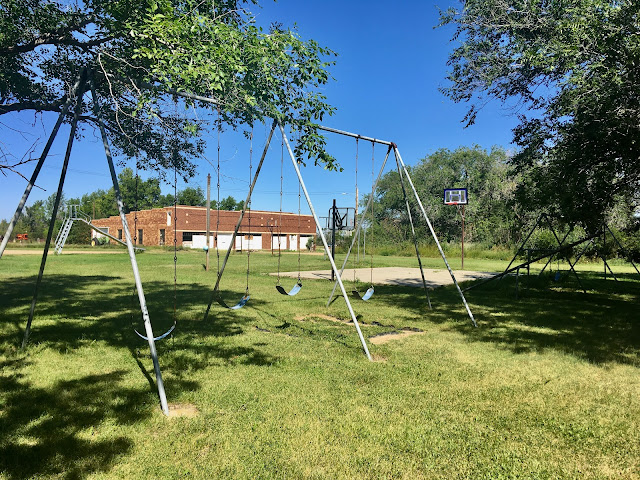 This was setting next to the park sign attached to a large boulder.  I hope you can read it.  I want to touch on a couple points she wrote about back in 1969.  Evidently the school was still standing at that time.  Where I don’t know.  She also writes about the Main Street stores, an old Hotel and lumberyard that had previously burned and fell.  And Ambrose did have a general store.  There is no trace of any of these buildings or the rubble left behind.  This leads me to believe the residents clean up after these disasters then allow the prairie grass move in and restore the site, covering up the sad memories. The Sheriff who lived in Noonan (remember that town with the titled sign) said back in 1910 they held that vote I mentioned as to divide the existing county into a north and south half.  The measure passed.  Now they had to establish a town as the county seat for the newly formed Divide County.  Ambrose and Crosby both were vying for the honor.  On the day of the vote a blizzard swept in.  The snows were so heavy that the residents of Ambrose were unable to make the trip to cast their vote.
Crosby won the count. 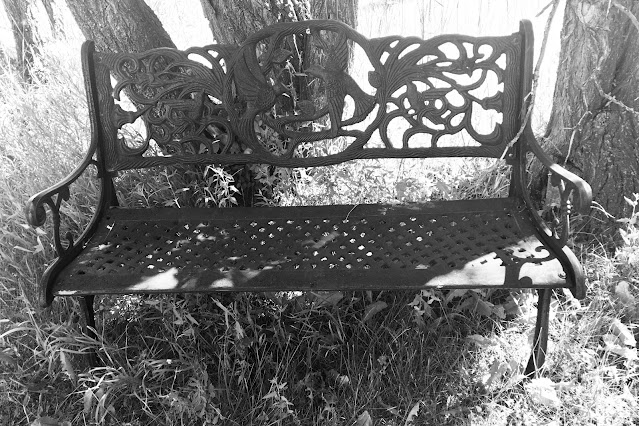 So you may be wondering why we didn’t stay at the park.  Right across the street lived two BIG dogs.  Bark, bark, bark when we first drove by to check out the park.  Days later I walked by there on one of my walks. Bark, bark, bark.  It wasn’t until my third try to get to the park to take pictures that I was successful in doing so without them knowing I was there.  I snuck in from the east side walking softly on the grass instead of the crunching dirt road.
The local who came by early on to tell me about the park agreed with me after my telling him why were didn’t stay there.  “Yeah, they are a nuisance.  They’re moving away pretty soon but that’s not going to do you any good.” 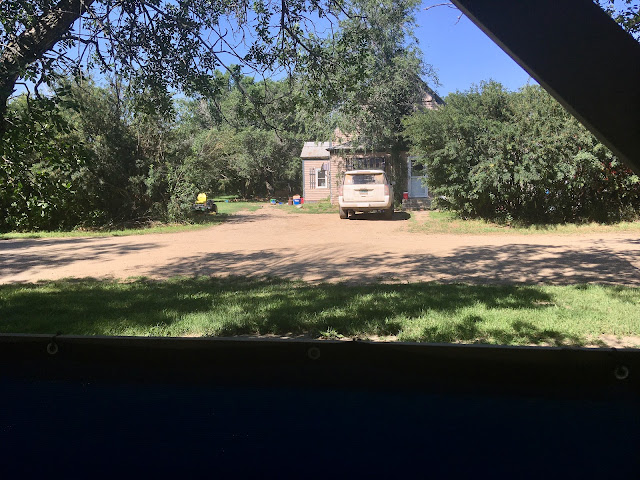 Guess the population in Ambrose will soon be down to fifteen. 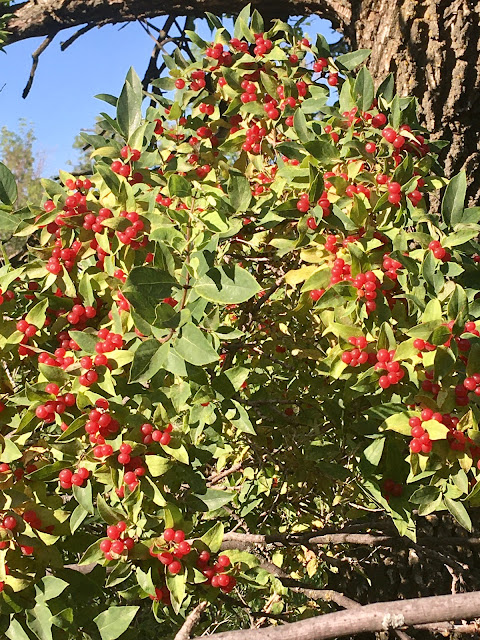 Barbara you can send Mr. Strolies’ photo to hwyfly@gmail.com and I will put it on a blog post so everyone can see Arthur.

And Ellen, you are right the hospital wasn’t all misery, pain and death.  Babies were born (well there’s a boatload of pain for you) people healed and lives saved for sure.  That was just my first impression seeing it in its present condition in a very moody and depressing setting.

I wonder what the families are who still live there, and how they might make their livings. Sheriff of course from taxes...assuming property taxes go to some civic administration. So sorry that Divide County seems to be just hanging in there!

I love that the sheriff checked you out for not being a wanted fugitive! I've been wondering about that. (I joke! I joke!)

It was also nice that you've also been able to get a bit of history on the place. It's interesting. I checked on real estate for sale in Ambrose ND. None was listed. I wonder who owns that old hospital and all those old houses? Also: If you bought a summer house here, one of those tiny houses, you could do quite a bit of exploring here for your captivated commenters.

Side note: My husband is reading along with these posts as well. It is a very interesting series, and as I read more, there are other ghost towns not too far away. Now I want to go to North Dakota something awful.

Sorry. I forgot that you do not like old cemeteries. But what a nice legacy for Rud to leave behind...all those trees growing still.

The "Dude's" one holer didn't have a seat, but it had T.P.
Most of us travelers have learned to bring our own, just in case....