A Most Excellent Day

Before leaving Norfolk I had a couple fruitless thrift shops to check out.  Ever see them try to maneuver a monstrous wind turbine blade through a major highway intersection in a big town?  Stopped traffic in all four ways through two signal changes. 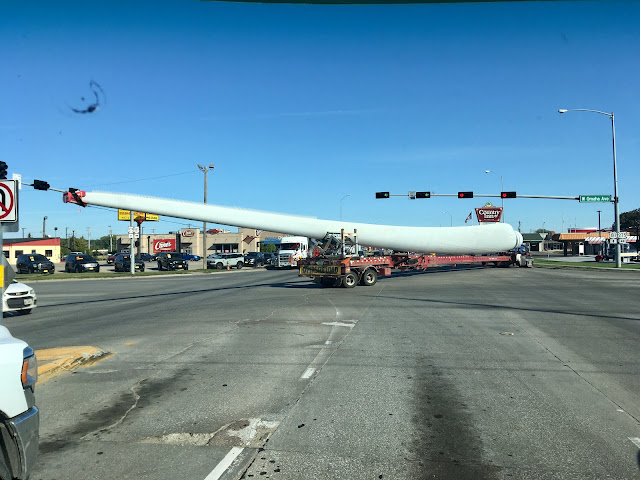 It was just a fifteen mile drive to our next town with city park camping, Madison (pop. 2283) when we arrived just before noon.  See the small print?  That’s going to be a problem. 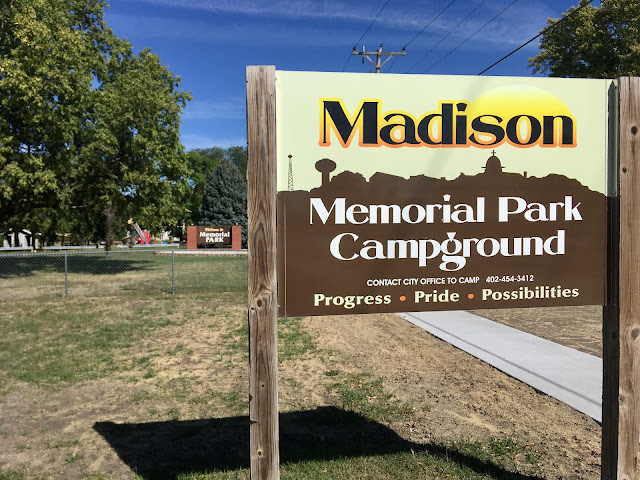 The camp park was a bit scruffy looking and appeared unused. 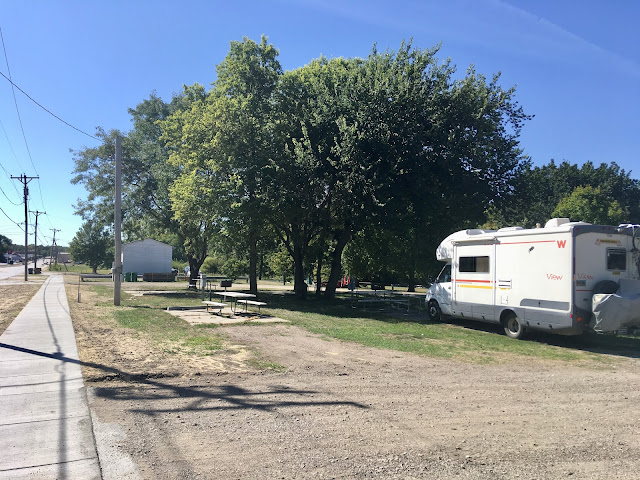 Gee, I wonder why?  Ya gotta get the key from City Hall just to use the restrooms?
Can they make this place any more unaccomadating? 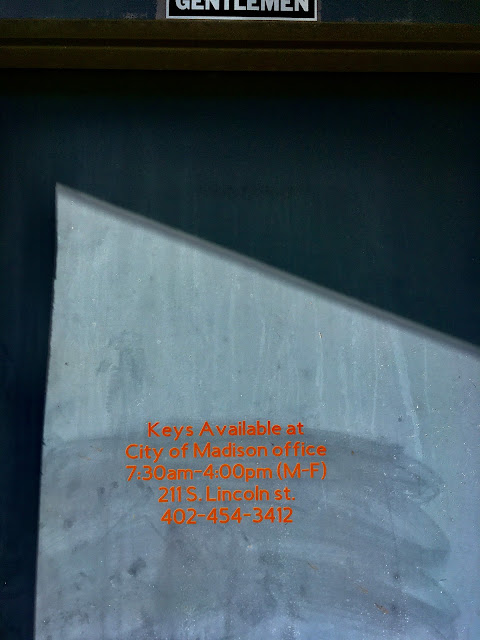 Then I saw this.  Well that solved one problem.  But compare: $20 here versus $12 or $18 back at that lovely park in Norfolk.  I wouldn’t even consider.  It wasn’t far to our next possibility which I knew was free and had a lakeside setting only thirty-five miles further. 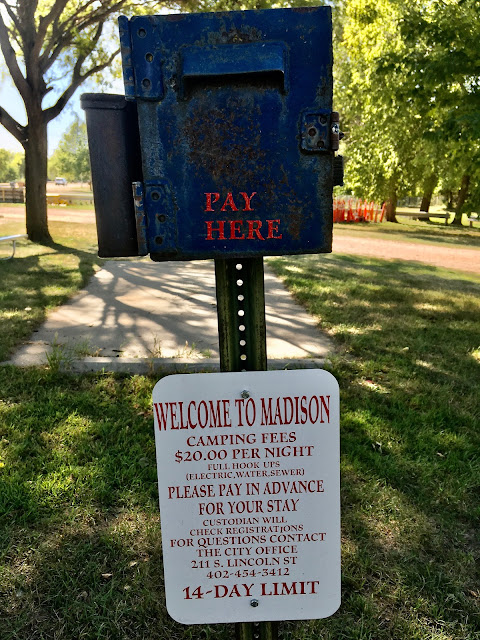 As we drove through town I saw this.  $4.38 for diesel?!!  I thought the place was out of business and that was the price left over from a year ago.  But no, it was open.  Unbelievable!  The last time I paid any less than $4.38 was the first of November last year in Yuma, Arizona and that was $4.00 even.
The lowest I have paid this year is $4.70. 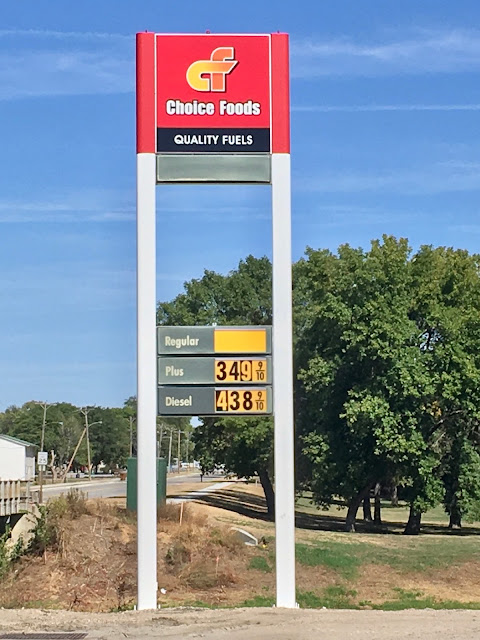 “Prepay Inside.”  Now that is a problem.  I usually just move on to a station elsewhere rather than go inside.  But for $4.38 a gallon I’d screw up my courage and go on inside.  I asked the lady who was around my age “Diesel is $4.38, really?”  She looked out the window to the big sign to check.  I told her about the four dollar price in Yuma last year and the lowest amount this year.  She had no explanation.
I looked around the store.  “Am I on Candid Camera?”
She laughed.  I could only use that line on old people.  It would be lost on these younger generations. 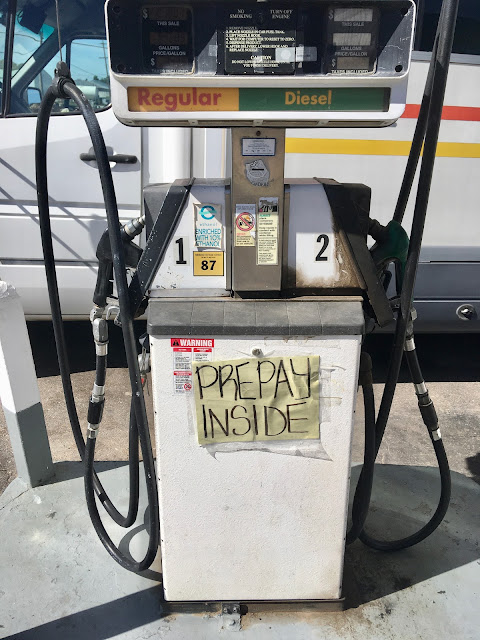 To celebrate my good fortune I thought I would buy lunch in this town.  Maybe a hamburger from a local stand.  Or even a Subway sandwich if there is one and lo and behold up the street I saw the sign. 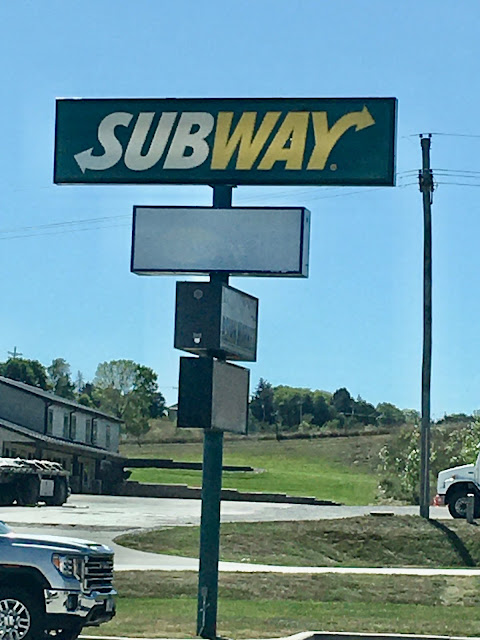 No one in line.  Really, I ought to buy a lottery ticket this day.
(Truth be known, I have never bought a lottery ticket in my life.  I have always felt I would have a better chance at robbing a bank and getting away with it than I would at winning the lottery) 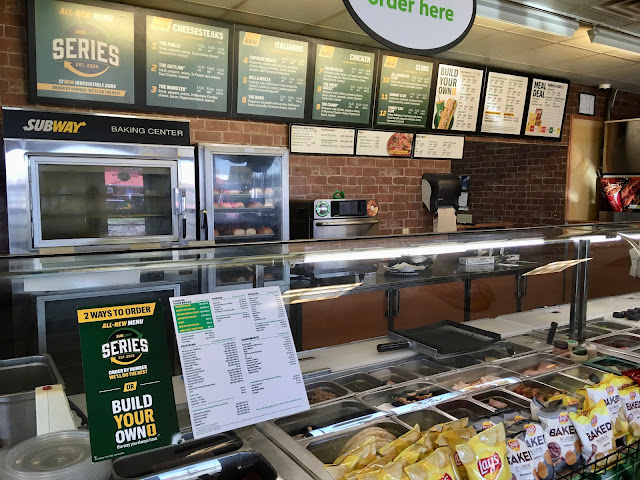 I was on a roll.  We moved next door to the empty parking lot of Dollar General to eat half my sandwich and feed Beans again.  Just before leaving I remembered I needed milk.  I picked up a bottle inside DG.  Now we were good for a long time, and no need to go into the next big town as the free camp place was a few miles north of town.  We could sit for awhile.  It’s warmer here.  Things were great.
- comment reply -
It was supposed to be eighty, not eight Barbara.  I fixed it after you caught it.
and
“You seem to luck out on beautiful weather and lovely blue sky.”  That is one of the great advantages of living this lifestyle is being able to follow the good weather.  On a side note to that is that fifteen years ago yesterday I bought this RV.  I never imagined at that time it would eventually become my home.
Posted by John @ Beans and I on the Loose at 10:00 PM

Ah ha! Anniversary of the Winnebago! And when did it become home anywhere in the world for you? Congrats on low price gas. I don't think I'll be so lucky here when I fill up with regular.

I have to remember to read your online books so I can find out why you ended up living in your RV. What do you do when you get sick?

Those wind turbines are seriously HUGE! We had a missle base silo just north of our little town. I can still remember as a child seeing a mammoth missle being moved through our town to be installed in that silo. It left an impression on me. Where do you land for the winter? AZ?

I need to write and tell you how much I have enjoyed reading your blog. I also downloaded all your books and thoroughly enjoy your descriptions. I like to go back and look at the pictures of things you described in your book. I only found your blog because one of my favorites recommended you and surprise, when I read your older blogs I realized you lived in my old stomping grounds- Santa Rosa. I live in Petaluma now. Speaking of gas prices my friend just paid $6.69 a gallon!!!! Insane. We are the highest prices anywhere. So happy travels and know that even though you don't get that many comments, people look forward to reading you every day.

Wow, that is an incredible price for diesel! In my area of Canada it is almost $2.00 a litre which is close to $9.00 a gallon.
Hope you and Beans have a good day.
Robin

There is a traffic circle in a small town about 100 miles northwest of us ON THE TRANS CANADA HIGHWAY! Because of that useless circle, Long loads like that have to divert through a different small village that has other issues. There is a dip in the road that is causing the long loads to get hung up. Some engineers eh?

I thought of you today. In Fleetwood pa, the library is having a book sale. They have everything arranged by genre and broken down author. There is one entire table of nothing but James Patterson. $2 each. Seriously probably 50 of his books there.

If you wish to send me a list of the books you are looking for, it would be my pleasure to go look. Debby(underscore)hornburg at yahoo (dot)com

Note that I am leaving here Saturday morning.

I'm reading another Patterson book new to me. This book, "Shattered" co-written by James Born, is a prime example of James having almost nothing to do with it, except adding his name.
Really screwy, I almost tossed it but I'm 3/4 through it, I may as well finish it.
Last week I had fun reading another one, but I've already returned it to the library, so I can't share the title name.
I wish they would make more large print editions, make my old..er eyes happy...(;+).....