A Sudden Change of Plan

I thought we would stay in Gunderson Park three days.  Locals drove through but no campers ever came to stay except for one couple in a tent.  It rained that night.  In the morning we got a knock on the door.   The police. I opened the door and of course Beans is right there.  “No! Get back.”  She did.  The nice policeman was just letting us know that there was to be a car show tomorrow “if the weather permits”.   I said we were planning on leaving tomorrow.  I asked if the car show was going to create a problem driving through town. 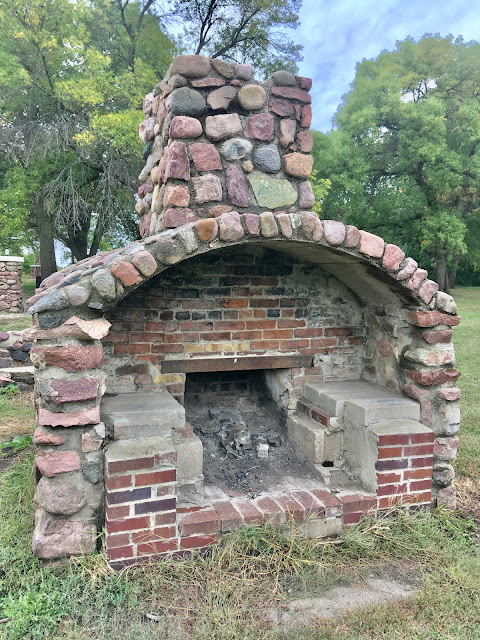 “Oh no, its going to be here.”  Egads!  I thanked him for the warning.
“Sure thing.  You and Beans have a nice day.”
I was cold. I wasn’t going to enjoy the day.  I didn’t want to try to beat the car show in the morning.
It was only twenty-five miles to our next site.  I could run the heater.
And so we left Centerville a day early. 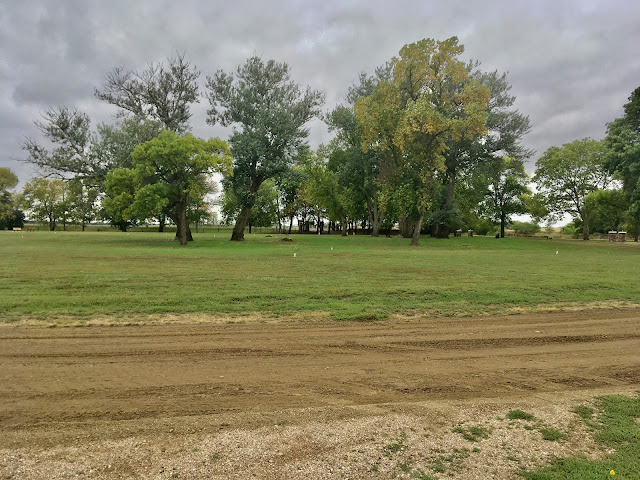 The Vermillion River behind the park took out this huge tree long ago. 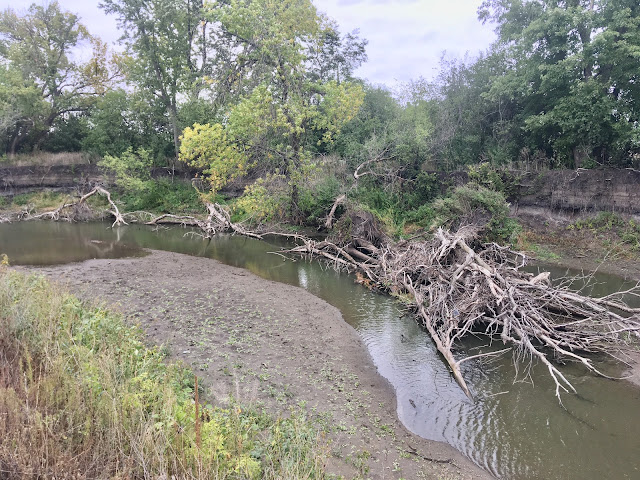 Vermillion South Dakota (pop. 11, 695)
When we got within sight of the campground “Oh. I remember this place!”  It was June of last year.  Now no disrespect to the homeless but it looked like a homeless encampment.  Vehicles of questionable road worthiness, cheap tents with blue tarps and sketchy looking individuals milling about.  We drove on to another town.  This time it looked better.  Only one beat-up old camper van was of any interest.  The grubby guy sat outside in the cold, talking to himself waving his hands about.  It appeared he wasn’t wearing any pants.  Not sure. 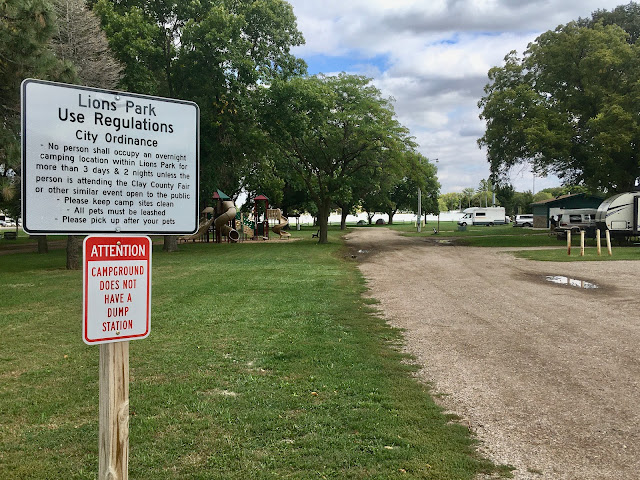 As I looped around thinking, this other guy came walking over across the grass to cut us off.  “Great!  What does he want?”  Nice guy in a big RV (in that vacant spot below) wanted to let me know he was leaving in thirty minutes and we could have his spot.  I thanked him for his offer.  I told him I think we will park down there on the grass.  “But this has electricity.”
“We have solar so don’t need it.  Thanks again.”  He shrugged his shoulders and walked away.  I didn’t go into the other reasons why we were going to park on the grass.  You folks know.  Anyway, let someone else who needs it have the electricity. 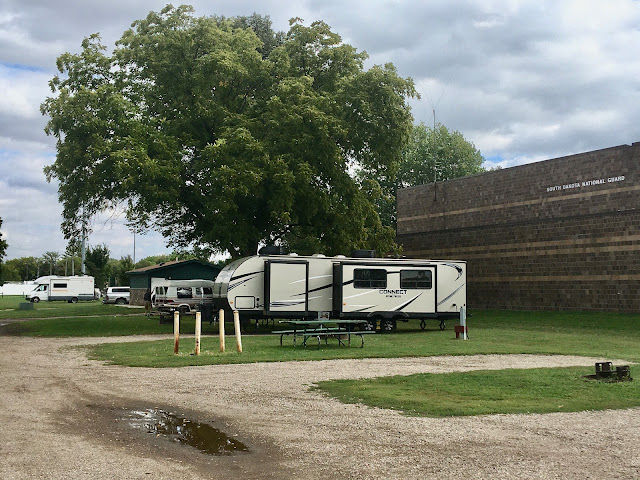 This was parked in spot number one.  I have never seen one of these before.
It looks like out of the sixties.  Pretty cool. 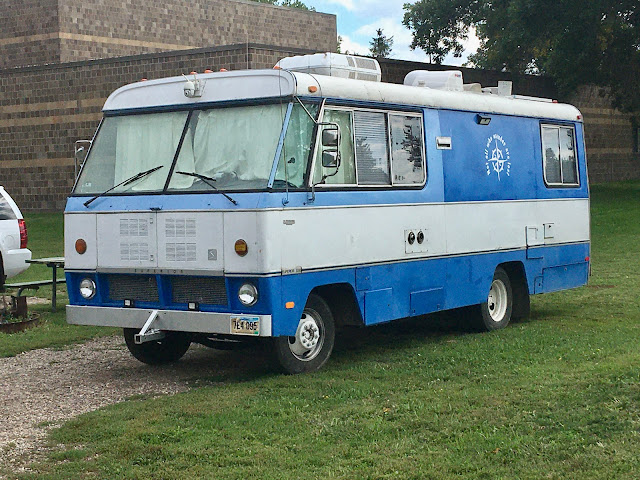 Beans spent the longest time up on the dash watching the comings and goings of people and cars.  She uses the GPS screen as a back rest.  There is a main thoroughfare across the way over there but it isn’t that noisy.  I think we’ll stay throughout the weekend here as long as the neighborhood doesn’t deteriorate. 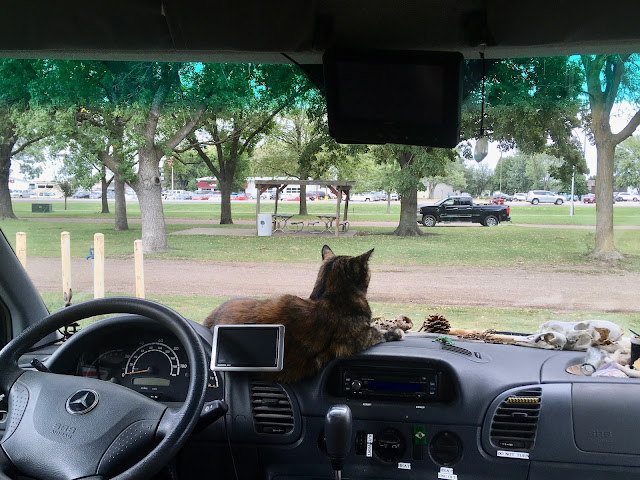 That first afternoon the sun came out, I got warm and was once again enjoying myself.
Meanwhile I was getting warnings of eminent rain back in Centerville 25 miles away.
- comment reply -
“What are all those skulls on your dashboard?”  They are coyote, bobcat, raccoon, turkey vulture, a duck and assorted rodents.
“How do you keep them from sliding off onto the floor?”  I drive slow.

Lol. The cats I know would be knocking the skulls down daily, just for something to do.

Good call. I always avoid people waving their hands around talking to themselves, with or without pants.

Scared me for a second when you said the police came to the door!

Good that Beans obeys that command. Other cats are more curious than listening to owners. Looks like a good, but fast decision paid off.

Hmmmmm...I would say a naked man talking to himself is a true sign to keep on going. That's one of my personal observations in life. :) Beans has the best seat in house!