Okay, we were here in Webster four years ago.  Its marked on my map.  I have no memory of it.  I had left a snippy review on the free camping app that led us here.  I wasn’t happy at the time.

After a long day's drive I pull into a handicapped access parking lot the coordinates took me to. "I don't think so!" I found my way around the streets to the other side of the park at the aquatic center. “Nope, not here either.” A bit peeved and wishing I could throttle the person who submitted this free camp area I left east to Waubay and stayed there.

I looked up on the blog for a post I may have made.  There was none, but there was for Waubay.  The photos I posted then were NOT where we were on the previous post here.  I have no idea where that is today.  I never saw it.  Anyway, after a stop in the grocery store in town we proceeded to the reported camp area in Webster.  Once I made the turn onto the street OH I REMEMBER THIS PLACE!!!  I wound up driving the same route as I did four years ago finding nothing.  Now on the free camping site app, four people had left reviews since I did.  They found it.  They included pictures.  Where the hell did they go?

We were led up this street to turn left at the yellow sign at the end which leads to the “handicap parking and aquatic center” I mentioned in my scathing review.  I came back around and turned this way past the row of long term people on the right that I had referred to as “squatters”.

And then I saw it!  Just a bit further down and across from squatters row.  The GPS coordinates are still wrong on the camping app so I cannot blame myself too much for having missed it twice. 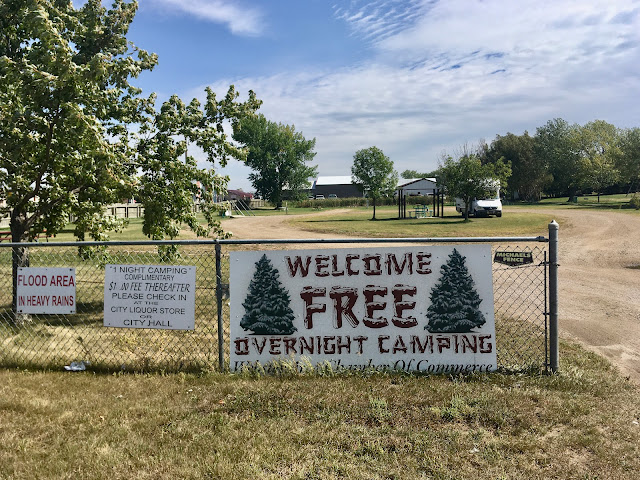 We’ve been slaughtering grasshoppers on the roadway for weeks now.  This place had water nearby so I decided to clean up the outside of our home some.  Get my mind off of tomorrow. 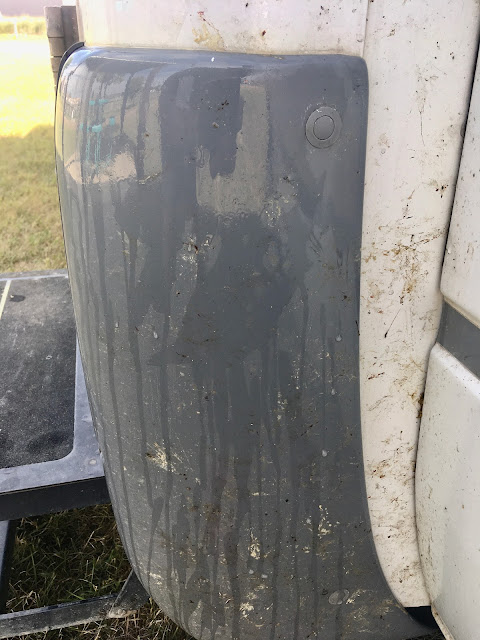 The trick is using BOUNCE dryer sheets.  Get one wet, wipe over the bug guts, let it set a half a minute and then go over it again with a bit of elbow grease for the stuck-on-real-good-parts and rinse off with a wet rag. 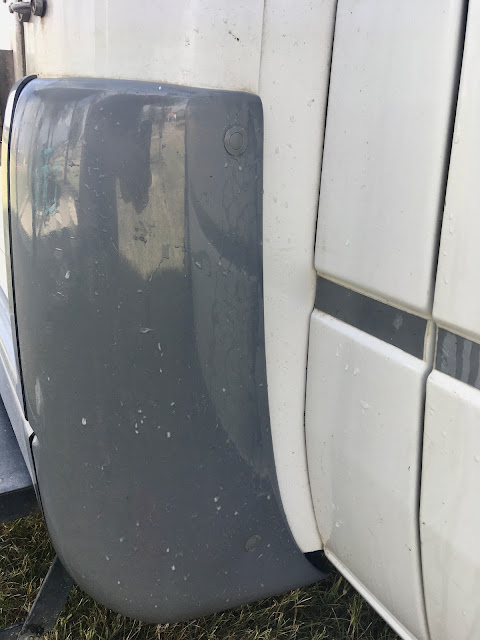 Tomorrow is the driver’s license ordeal.  I am in high anxiety mode now.

Well, you have such a good recipe for getting rid of bug spatter, I imagine you have a good recipe for dealing with driver's license anxieties. Take one cat, do not get wet, feed her whatever she likes for breakfast, after she's cleaned herself well, see if she'll sit for a brief pet, and talk with her about your feelings. She is a wonderful therapist, will just look at you and know your feelings, without having to say a thing. And having braced yourself for sitting and waiting a good hour or two to actually get the test done, and then the horrible photo taken - everything will be all right.

I have never heard of the dryer sheet trick before. Thanks for that. Good luck tomorrow.

Good luck getting your driver's license tomorrow. Hope all goes smoothly for you.

I had forgotten the grasshopper guts all over the windshields back there. Great tip!
South Dakota is a super state! I have a brother is Spearfish. Beautiful area. Isn't it interesting the different rules for each state? Telling about the people that dwell there. South Dakota has the prettiest cowgirl governor. "Just camp where you like, friend. We won't bother you."
Don't forget to smile when they take your Mug Shot! :)