Encounter With a UFO

We were in these parts four years ago.  I made a special trip to a museum in Warren, Minnesota to see a patrol car that had been hit by a mysterious object on April 27, 1979.  Now we are in the neighborhood once again and we went to the site of the UFO encounter.

Deputy Sheriff Val Johnson was driving south on this highway at 1:40 a.m. when he observed a very bright light ahead at that line of trees.  He accelerated to investigate when suddenly the brightly glowing something came directly at him striking the front of his patrol vehicle and continued over the roof here at mile marker 68.  His vehicle traveled 1000 feet further before skidding off to left landing in a ditch.  Officer Johnson was knocked unconscious and came to with his head against the steering wheel and arms draped down by his side. 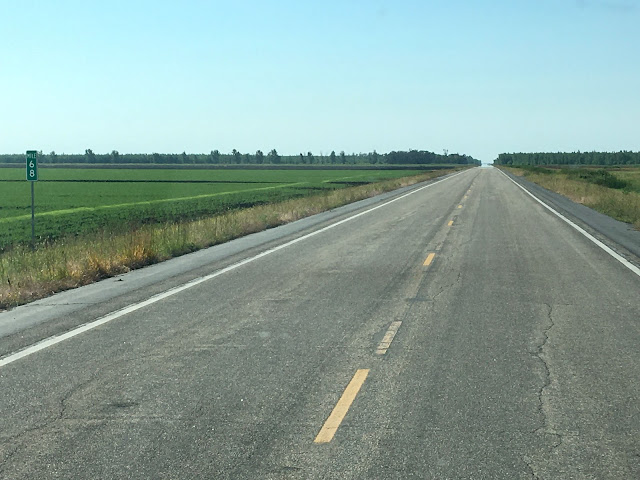 Diagram from the incident report.
He was heading south to the bottom of the diagram. 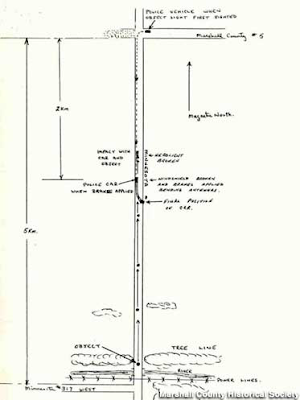 We are not going through Warren again so will not be revisiting the museum.
You can view my blogpost about viewing the patrol car in the museum by clicking HERE

Click on older post at the bottom of the blog page if you want to see the rest of the museum.

Thank you Heidi.  I thought the Red River looked like it was flowing backwards, south to north but figured I was imagining it, that the wind made it appear so.

The ice rink was dirt and had no way of containing water which led me to believe they had ripped it out.

That is a fascinating story. I will read more about it when I get home to a real computer.