Yep, back in North Dakota.

The Red River divides Grand Forks leaving the eastern part in Minnesota which is know as East Grand Forks (pop. 9,176).  As for big cities, Grand Forks being the third largest in North Dakota, it wasn’t really that bad.  Poor Williston just didn’t stand a chance with me.

I had a list of things to do.  I stopped by Cabela’s to see about replacing a hat that is starting to fall apart.  I didn’t find what I wanted and I am not into camo.

But the stuffed dead animals in Cabela stores are always nice to look at. 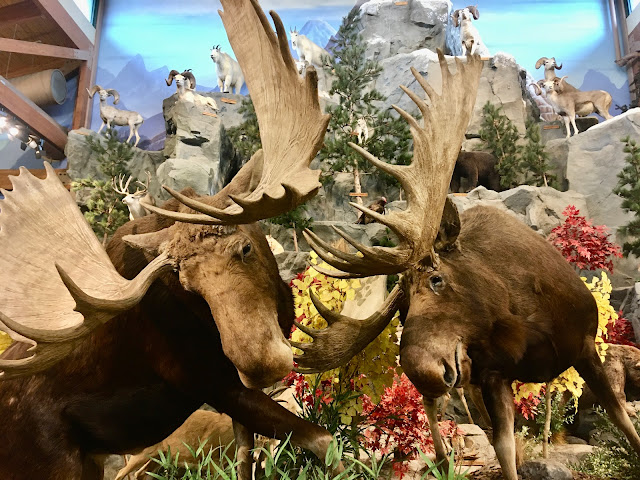 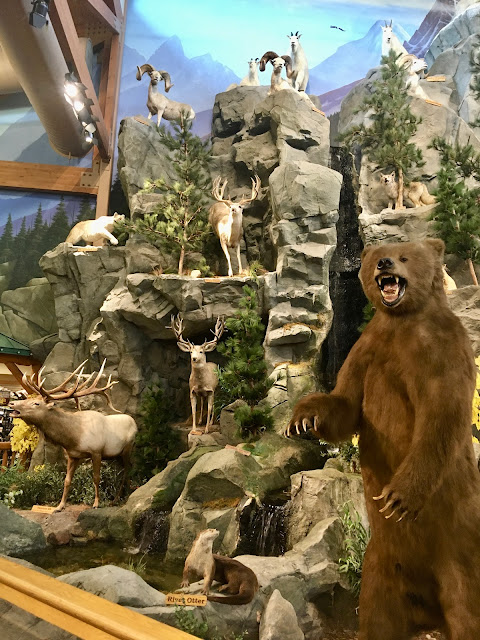 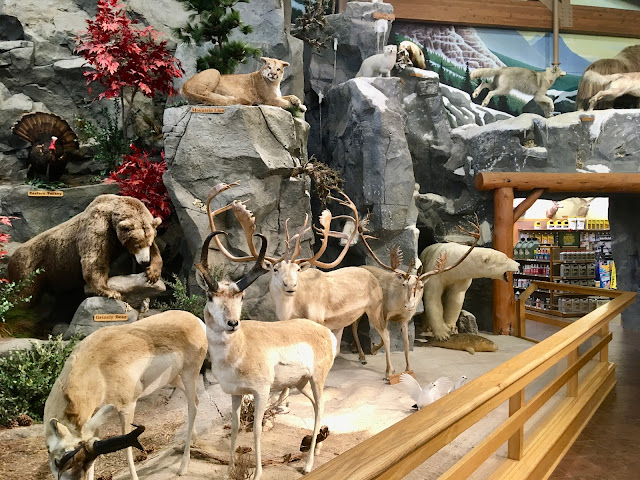 And there are live fish.  I liked the catfish best. 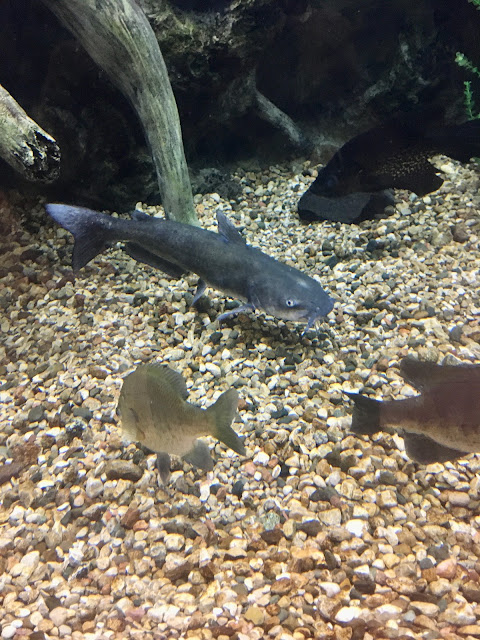 I ate the rest of my breakfast in their parking lot then continued on through town to a book store.
The first book store in a long time for me. 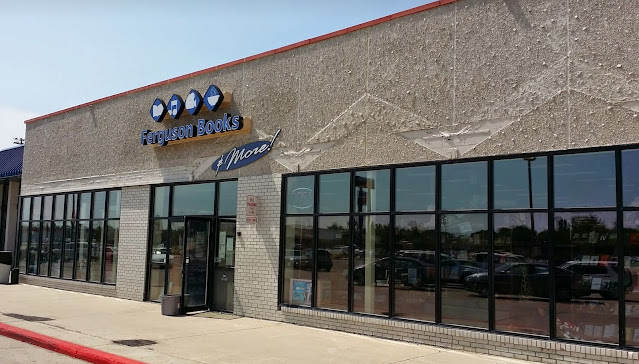 I scored on two books on my list and was able to leave with them a bag of already-read books I had.
So it was nice to get rid of them and I got half off for my donation.
Cool beans! 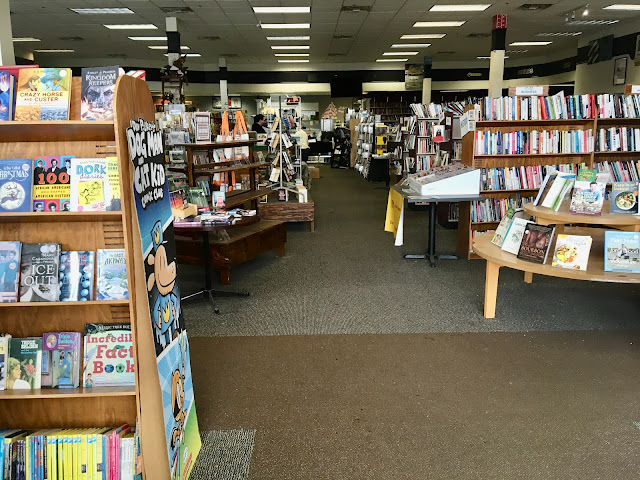 I drove across town for the cheapest fuel.  In doing so I went by the University of North Dakota.  What a huge massive college it was, a town in itself.  I wound up buying exactly twenty gallons and saved exactly three dollars.  It was a nice drive in a big city and I got to see a lot I wouldn’t have otherwise if I wasn’t such a skinflint, which if you look that up they say “it isn’t a nice word”.  I don’t care.
What I do care about is driving out of my way to go to an Arby’s to get a pastrami sandwich finding that the inside dining area is closed because they are “short staffed”.  I can’t drive a small house through the drive-through!  Short staffed?  Hire taller people!!  Very disappointed I left discovering a Jimmy John’s nearby.  I went in one a long time ago, got throughly overwhelmed and left.  Another time I was traveling with my friend Amanda.  She placed an order with her phone while we were in Walmart shopping.  She’s good at that kind of thing.  I am not.  I miss traveling with her.  Anyway, I managed this time except...they start calling out numbers “is ready”.  The guy didn’t give me a number.  I don’t even have a receipt!”  The nice guy (second from the right) helped me out by explaining the numbers are the number to the sandwich you had made.  Oh.  Mine was a number 8 and it was sitting there on the counter waiting for me.
See only in North Dakota...or was I back in Minnesota now...doesn’t matter, young men like them are nice and will help out a confused old man gladly. 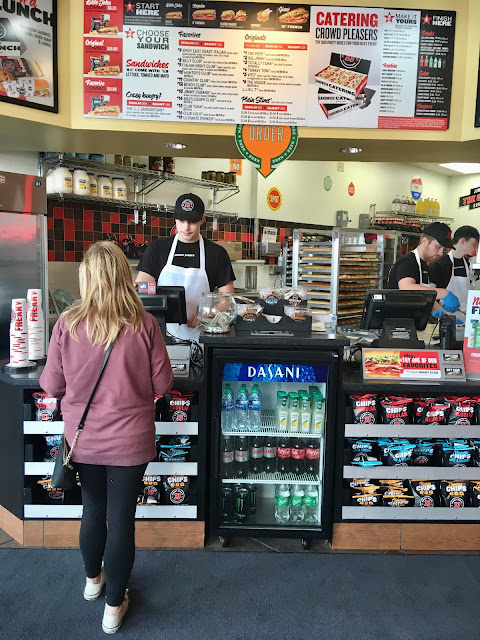 Question: I saw several Manitoba license plates while touring through town.  What reason would these Canadians be driving down to Grand Forks for.  Jobs?  Maybe students at the college?

Nice looking fish. That was a big book store! Have a good week!

Cross border shoppers maybe? I live an easy driving distance from a US crossing. It's a popular activity here abouts.

Get taller people. That's hilarious!
Sounds like a lazy, lovely day. Have you ever thought to go to thrift stores for books? They're super cheap and you can drop off old ones for the rest of the book reader world.
Speaking of close to Canada,I remember driving my mom and my brother's mother-in-law up in the Iron Range to vist. They all went to the local Bingo Hall that night while I babysat kids. Mom and Emeline came home with a snoot full and were giving my poor brother a hard time to go up to Canada and get them more moonshine. He had to get up to work in the morning and was having none of it. The next day I drove home with two very sick ladies in the car. I felt they deserved it! :) Only time I ever saw my mom tiddly. Makes me laugh thinking of it. I miss those ladies!

And as for being a miser, I seem to remember an old guy named Ben who loved to say, "A penny saved is a penny earned." We were raised to be frugal out of need. Now I just LOVE a bargain. Check out the local consignment stores for your clothes. You can get high quality for little money. Plus it's fun! Okay, enough advice. ;)

Glad you got some good book deals. I am a library lover and I am lucky to have a terrific library in my city. I imagine it is difficult to take advantage of a library when you are on the road but some libraries do sell used books cheaply, in case, you get a chance to visit some.

Do you yourself a favor, Jon, and take a look at Tilley hats. I purchased one this Spring and it's one of highest quality hats I've ever owned. Supper comfortable. They're expensive on Tilley's website but you can find them online in the $60 price range.