Gee, I think they have room for a couple more signs, don’t you think? 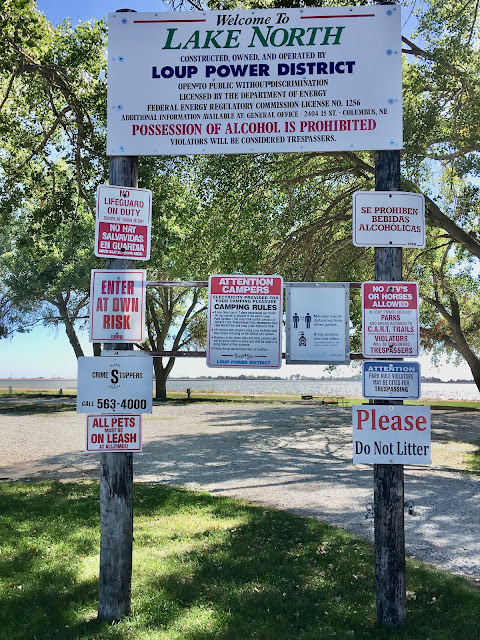 It was free to stay here and that even included electricity along the row to the right.
We stayed down at the end on the left beyond that van. 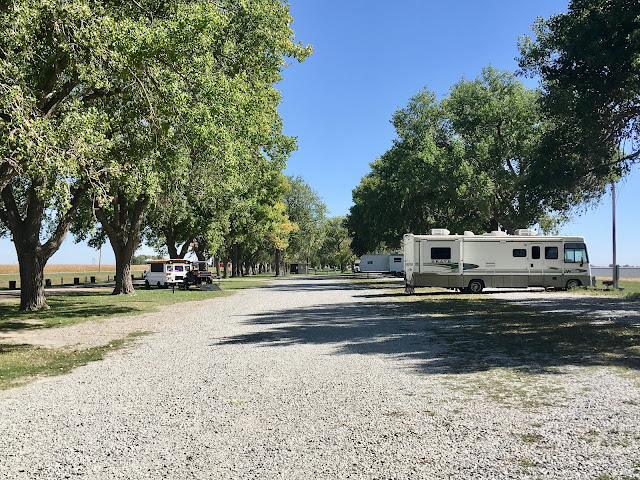 We were over there to the right on the other side of this trailer that was parked in the corner.  It had all the appearances of being abandoned.  There were no propane tanks on the front.  Two windows on this side were busted out and blocked off from the inside by plywood.  The other side windows were painted over similar as to that back window.  The Nebraska license plate had a tag from 09.  An open padlock hung from the door.  I could have gone inside but did not.  Why?  You can see the orange electric cord.  It was plugged into electricity.  Is someone actually living in there?  Maybe that someone is dead.  I didn’t want to find out.  That first night a car roared in at 10:42 p.m. and parked near the trailer.  The guy got out with a super bright flashlight and went into the trailer.  It lit up the whole inside.  He was in there for just a minute then came out, got in his car and left.  Weird.  I thought it might be the Sheriff but it was too dark to see if any lettering was on the side of the car.  I also thought if it were the law he might have hung around a bit longer. 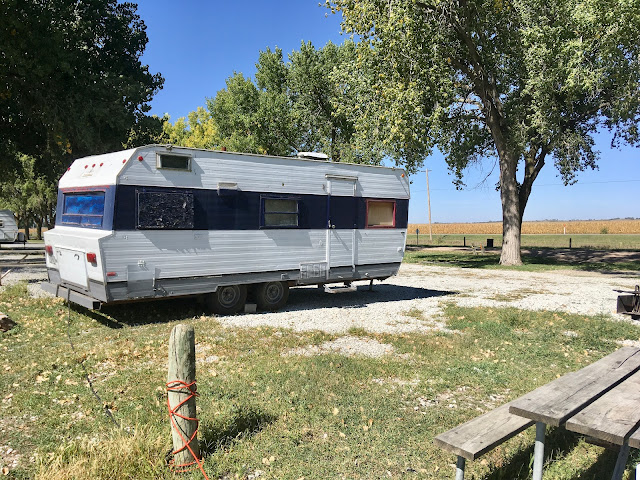 Incidentally, my new flashlight is super bright.  A good buy.
Lake North is a huge man made reservoir.  The wind would come whipping in off the water. 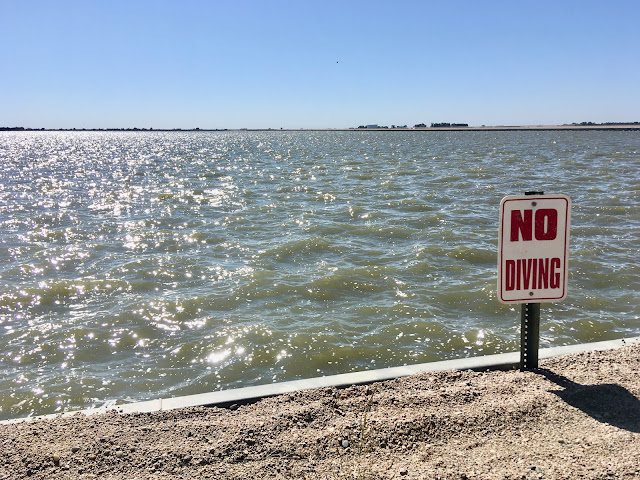 Swimming was allowed although the water was too cold for me and looked a bit yucky.
These ski vests were just sitting here.  Lost off boats and drifted to shore? 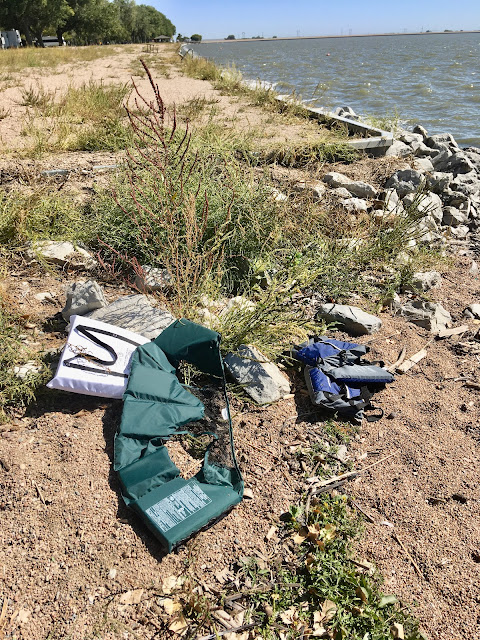 Now behind me from where I was standing to take the above photo is a road that cuts across the lake on a levee.  You can just make it out above the ‘NO DIVING’  sign in the upper photo.  On the other side of the levee road is Lake Babcock below.
I have never seen lily pads standing tall and free before. 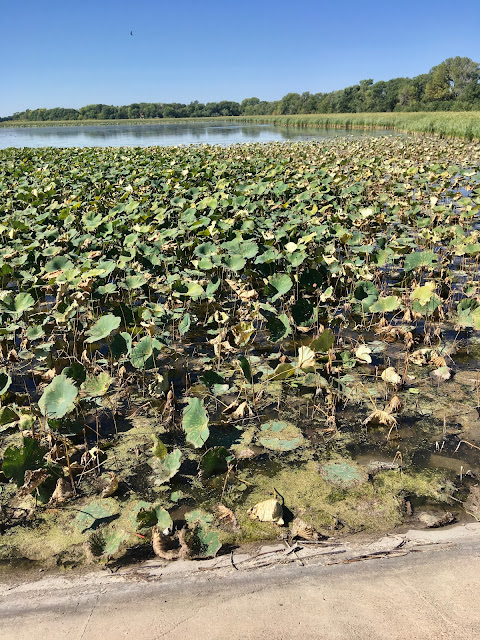 - comment reply -
“When did it (the RV) become home?” and “I’ll have to read the eBooks so I can find out why you ended up living in an RV.”  It was the transition of 2016 to 2017 when it all began.  The “Getting to Know You” eBook details when it all started and my adoption of Beans.
“What do you do when you get sick?”  I don’t get sick.  I haven’t been sick once since 2009 when I came down with a case of the flu that turned into pneumonia.  After two trips to the ER, that scared me enough to change my way of living and being around people.  I’ve never had so much as a sore throat or sniffles since then.  But...I did have a medical issue since living on the road.  That experience is detailed (maybe a bit too graphically) in the “Pandemic Year” eBook.
So read the ‘Beans and I’ eBooks in order.  The ‘Sinbad and I’ eBook is just collection stories from trips we made before I began living on the road full time.  It doesn’t necessarily need to be read before the ‘Beans and I’ series.  They are all free to download.
and lastly
Thank you Lini for the very nice comment.  It meant a lot to me.  I received a review on one of the eBooks long ago.  It was from a ninety-year old man who said “These books have given me adventure for many days.  I love cats.  Sinbad and Beans have filled my days with joy.”  If that man was the only person who read the eBooks, it would be worth every minute I put into writing them.

I love the sign that says open to the public without discrimination and then lists all the things you cannot do!
I am off to read your ebooks. I may be gone some time!

If I did buy from Amazon would you get any of it?

Hi there John from “the other side of the world” again. I am now reading the first of your and Beans ebooks. Look forward to your posts each day as they are always interesting and informative and always in places previously unheard of! I don’t comment much but you and Beans can be sure I am out here enjoying the adventures with you. We are a “cat and his person” household ourselves but no RV. Take care.

I'm writing in a newsletter on the topic of Conversations. For me, the pandemic meant contact just through this keyboard, or the phone. I missed face to face enjoyable conversations. Just wonder if that's anything you miss, or have gladly given up in-depth sharing for all the small-talk which is what quick encounters probably offer.

Thanks for answering all of my questions, John! I figured out how to download and open your ebook so now I will "get to know you"...
It's nice that you can often find campgrounds near water. Must seem like you are always on vacation!

Like the others, I really do look forward every day to reading about your fluid life. I picked you up in Anamoose, ND and already I'm in Nebraska! Maybe Beans could write the next E-book, The REST of the Story!

The first thing I thought about that trailer is 'meth lab'. That is scary but local police MUST be aware of it, I would think. What's the shadiest character you ever came across in your travels?