That figure increases to 13,000 by midsummer due to seasonal residents, tourists and drifters like us.

Okay, this may not be the worlds largest thrift store... 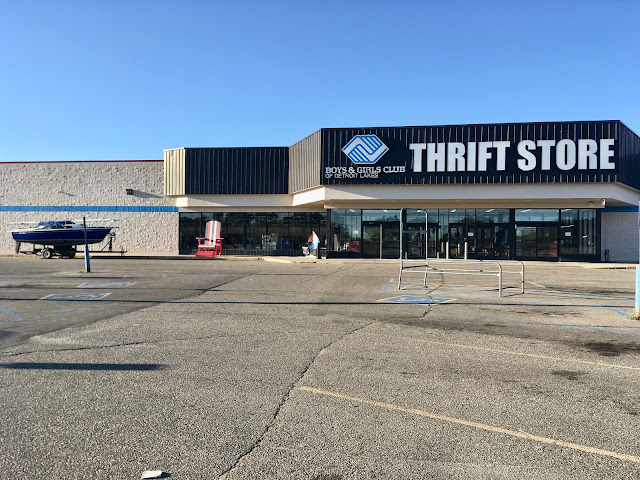 ...but it was the largest I had ever seen.  One corner was stacked with unopened boxes from China straight off the cargo ship.  Some racks of clothing were brand new all the same color which led me to believe they received overstock from nearby retailers.  Look in the first photo, someone had donated a sailboat.
They had a well organized huge used book section but not with what I had on my list. 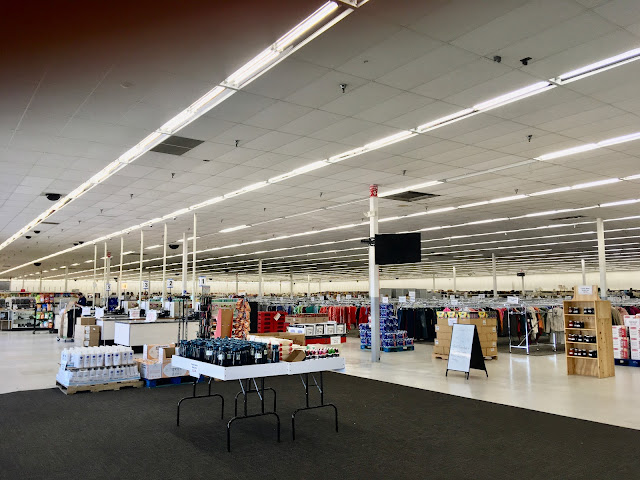 The thrift store was just down the road from their Walmart.  Reviewers left comments as to how noisy it was due to traffic noise, train horn blowing and Walmart Radio blasting to the late hour.  So we wound up staying in the Boys and Girls Club thrift store parking lot which was much quieter and further from the train horn blowing.  The next morning we went back up to Walmart.
I needed a new flashlight.  Mine (on the left) hasn’t been operational for over a year, maybe two.  The carrier inside for the batteries disintegrated.  I probably paid around $50 or so way back when I bought it.  Now I see the price is $63 on Amazon.  That’s why I’ve gone so long without.  I see less expansive ones now on Amazon and was going to replace it when we got back to the desert.  Anyway, I decided to look at Walmart.  Okay, so they had a lot to choose from with similar prices as Amazon for the less expensive lights.  I selected the one on the right.  Now get this: it is made with aluminum, has three power settings, LED, push pull high beam or flood, all the same features as the old flashlight except...it is brighter with more lumens.  Price - $12 and that included four AAA Duracell batteries which go for $5.49 at Target.  So this flashlight costs $6.51?   Both made in China.  I just don’t understand marketing. 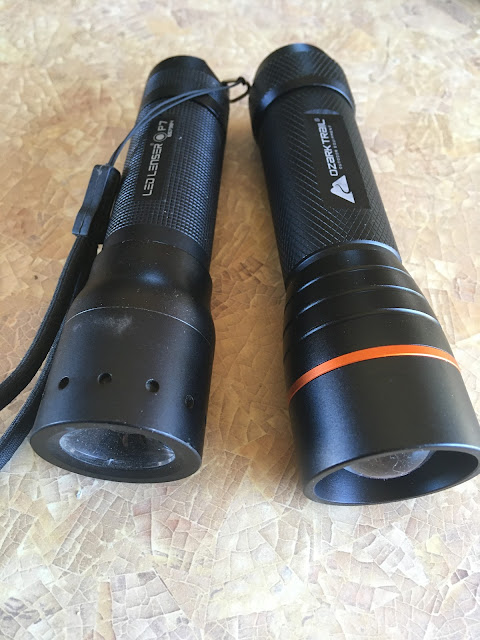 Now I am sorry I didn’t take more pictures inside the thrift store
as this is all I have for this post.

Great flashlight purchase! That reminds me to check mine (which I never use) and see if that batteries have disintegrated. One sits by my bedside. I should have one in the car too. Oh, you've got a typo on your total price of $6...don't you mean $16? Amazing!

No typo, bad math possibly but I checked. The flashlight cost only $11.99. I just rounded it to $12 for simplicity.

That thrift store is SCARY! A monster! I would take one look and run away. I like the little tucked in places run by unusual folks that end up being a friend. Thrifting for me is like treasure hunting with a little visit on top. Not unlike a used book store. People that run those places are usually NICE! With a story to tell. I'm sorry you didn't find your favorite authors there. I can see why. Appears to me your life is kind of like a treasure hunt.

That's a nice looking resale shop! I like how clean and well-organized it is.

I have LED camp lanterns I paid almost $30 each about six or seven years ago. The same lanterns are now available at our local Cdn outlet for half that. The technology has gotten cheaper I guess.

I came down here to say the same thing as Karen. Remember how expensive calculators used to be? Computers? Technology gets better and cheaper..

One question though...did you look for a flashlight in the thrift store?