A Nice End to Nice Drive

We left Grand Island for the town of Hastings (pop. 25,152) where Kool-Aid was created (I only learned that when I looked up the population), twenty-five miles away.  We had lunch in their city park where no camping was allowed.  Then we moved east five miles to a reported free camp area.
Well, no more camping now due to “budget cuts”. 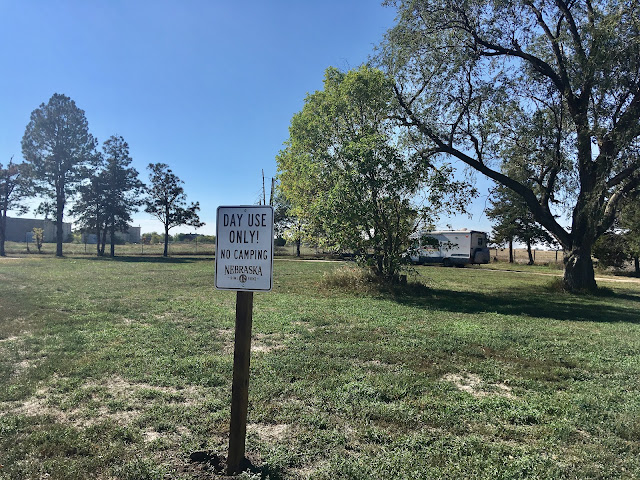 I thought this would have been a nice place.  Beans did not.  A distant train horn sent her back inside.
I went for a look-about. 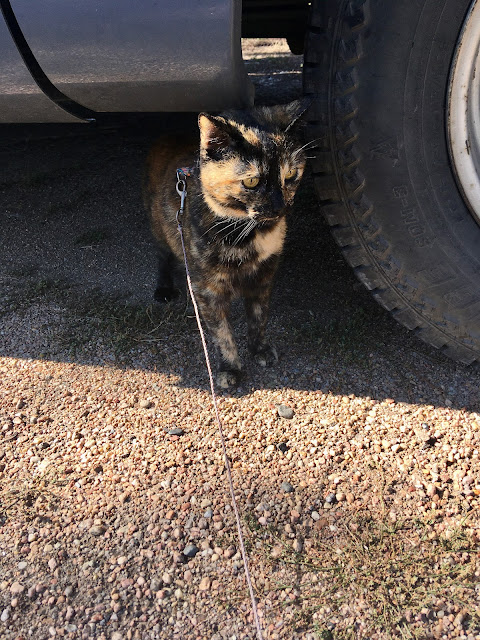 Hmm...used to be a cemetery. 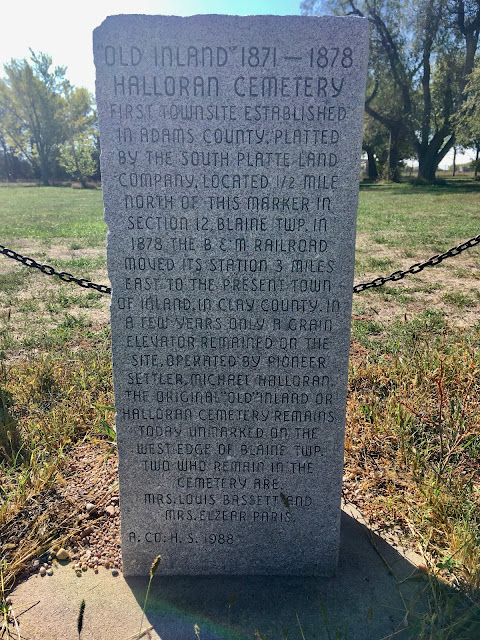 When I got back, she wanted back out.  I thought more of this spot as we walked around.  Train honking, nearby highway noise and ghosts.  It’s okay there’s no camping. We would have moved on anyway. 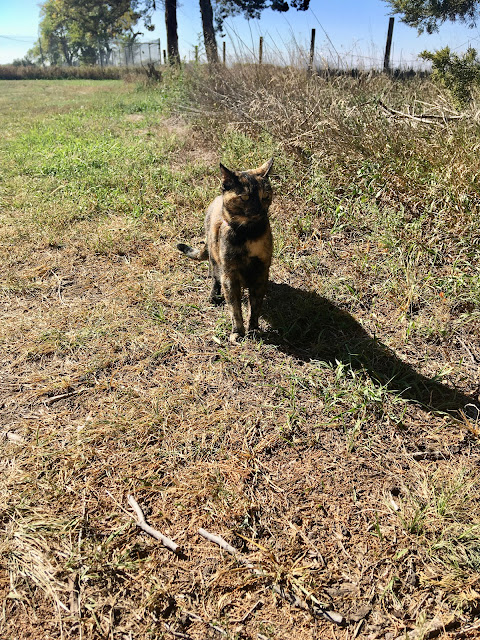 I was starting to see fall colors along the drive. 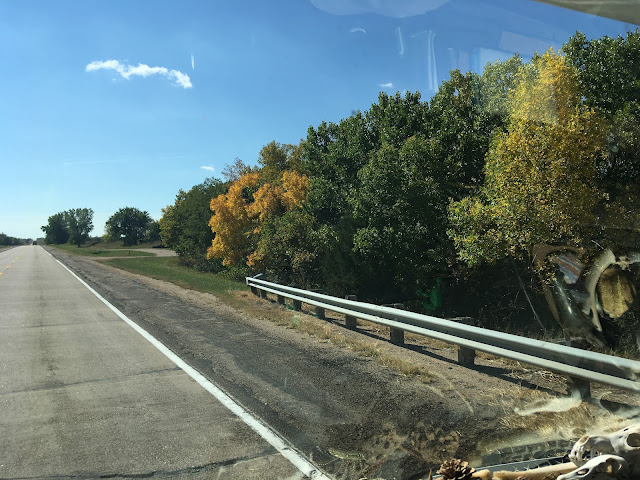 Our next possible stay was in the town of Superior (pop. 1825) and their Lincoln Park.
I was surprised to see that we had driven eighty-five miles for the day.
It didn’t seem that long as I was enjoying the drive. 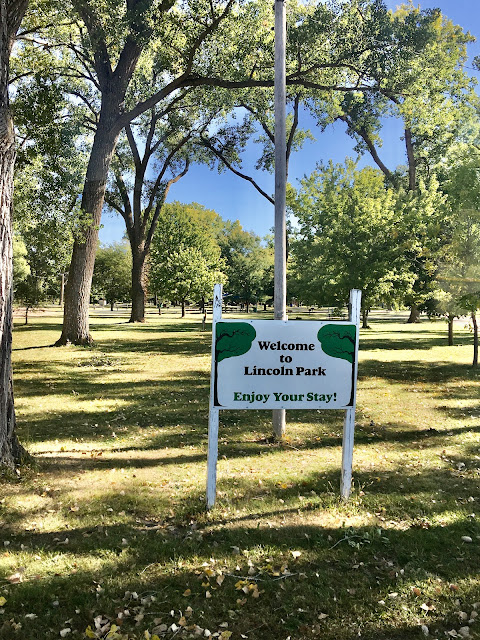 This park was big but did not have all the elaborate features as some of the recent big parks.
The important part though was it was free, with electricity, donations requested.
Thank you, Superior. 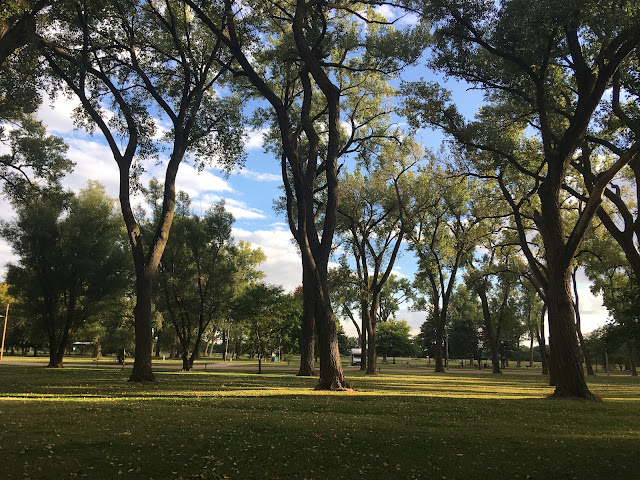 Beans discovered these plants with leaves as big as she is.
They looked to be something you’d see in a tropical setting. 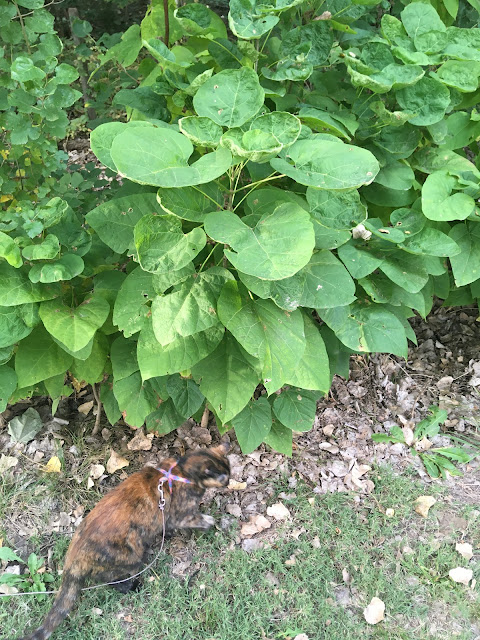 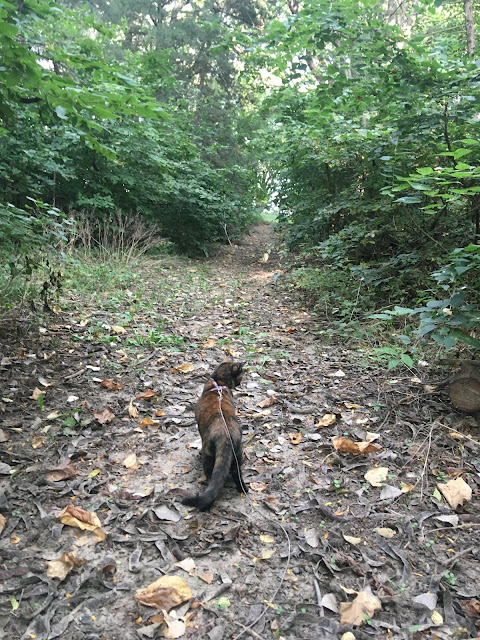 This was a nice place to sit and endure the impending wet rain and cold. 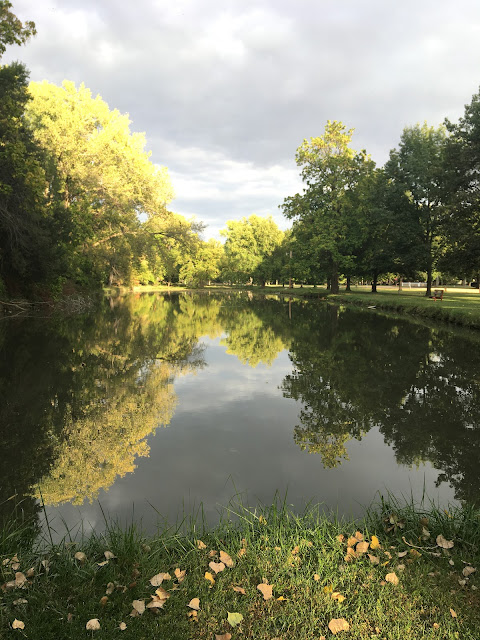 Because of this predicted drop in temperature I decided to dig out my little electric ceramic heater.  When I say ‘dig’ I mean it.  I have to remove all the bedding and cushions to get to the hidden storage space beneath where I keep things I don’t use often.  I bought this little back in 2013 for $19 when Sinbad and I traveled about staying in RV Parks a lot using their electricity.  I think this is the first time I have used it with Beans along, which means since early 2017.  The little heater does the job.  Its just enough for our small space.  Only thing is the fan is noisy.  Its like being near those ventilation systems in the grain elevators. 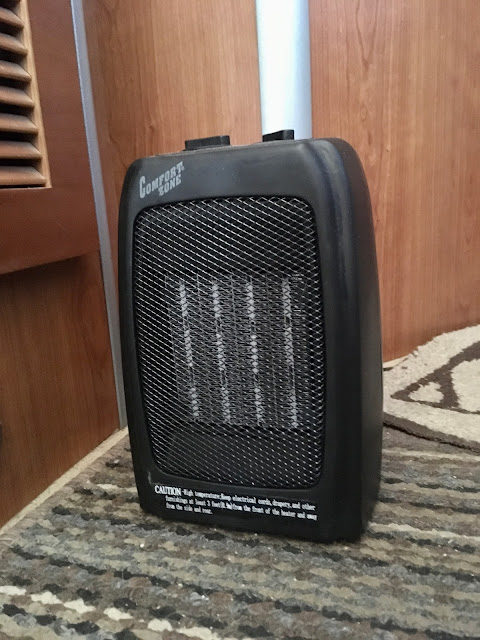 - comment replies -
“What do I feed to Beans.”  I used to get Tiki Cat, a grain free wet food.  I’d have to order it in huge quantities ($$$) to last a long time.  It was hard to get the variety packs in pet stores.  Then when the pandemic set in, many times it was ‘out of stock’ from the online supplier.  I switched to Fancy Feast as supposedly it is somewhat grain free.  I don’t really believe them but at least it is more readily available in stores.  As for the litter box, I used to keep it in the shower stall when Sinbad was with me.  When I got Beans, I removed the passenger seat and installed a end table cabinet for the home that is designed to hold litter boxes.  It shows in various photos on the blog.
-
“How long does a tank full of propane last?”  I’ve gone as long as fifty days.  Usually five weeks I start looking for a propane dealer just to be safe.

Glad you didn't end up sleeping near the ghosts...this being the season of Halloween, who knows who might have hitched a ride with you all!

Thanks for the answer. I cannot get over the green! It looks as if autumn has not started there. We are well into it here.

What a beautiful place Superior is--- I love all those trees and the creek/river.What always amazes me is the scarcity of people. Here in Sonoma County we have people everywhere- almost impossible to find a quiet place without them. I do enjoy your travels.

When the railroad station moved, the town died away. Railways and highways can make or break those little towns.

Beans truly is a beautiful cat. Autumn colors.
Sounds like a meandering kind of day. Like a leaf drifting on the top of the current.
Funny how some folks need "white noise" to sleep and to others it's the pea under the mattresses. Personal wiring, I guess. Or the environment we were raised in. Nature or nurture, huh?

Ps that plant looks like something we call knot weed. It grows fast and tall.

There are "friendly" ghosts..Casper told my pal Barn Kat this is true.
Kitties never tell white lies?
I had a ghost in a house I lived in,saved my life, my blanket fell on the electric base board heater. The spirit woke me up b/4 I became toast.
Not Kidding. The few friends.. I've told just roll their eyes.Ya-sure-ya-betcha-David..
Oh well....