An Idea, Maintenance and an Adventure

This woman is over across the way from us.  She is in a Ford Transit van.  Most all vans are fixed up by their owner to live out from.  You don’t buy them ready-made.  I can see she has solar panels on top.  But I also see she has a plug-in on the side.  See the yellow extension cord.  That is unusual for a van.  That is also a pretty slick modification.  I admired it. 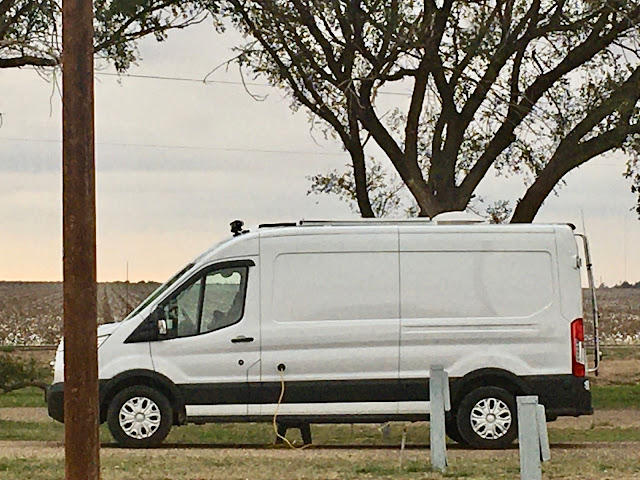 Then a little spark went off in my head.  OMG!  Why didn’t I think of an extension cord?  See, our home comes with a twenty-foot long power cord to plug into electricity.  It is a heavy duty thick electrical cord.  It is a real challenge for me to get that thing back into its tiny compartment.  It is as if trying to coil up the transatlantic cable. 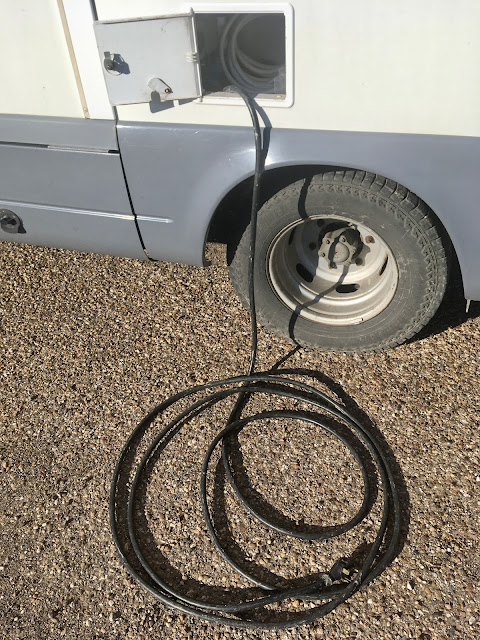 Why I could just plug it to an extension cord and run the extension cord out to the electrical hook-up. So much simpler.  I’ve only had this vehicle for fifteen years.  You can’t rush genius.  Well to be fair to myself, I rarely plug in so the issue didn’t surface all that much.  Its only that we are out on the road later in the year now, a bit colder and I have been using that electric heater more than ever.  A short  bright yellow (don’t like red) extension cord is on my shopping list now.

Every so often I have to defrost the freezer.  It is a real chore as the ice build-up on the back wall gets an inch thick and is hard to chip away, especially with those bolt heads. 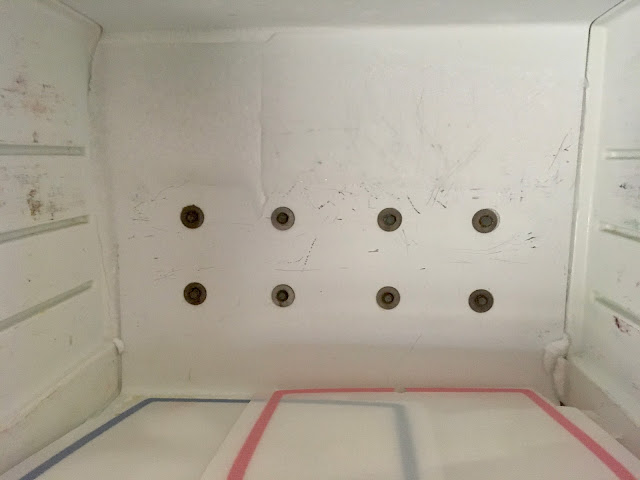 A few years ago, in a rare moment of brilliance, I bought some plastic place mats and placed them inside. 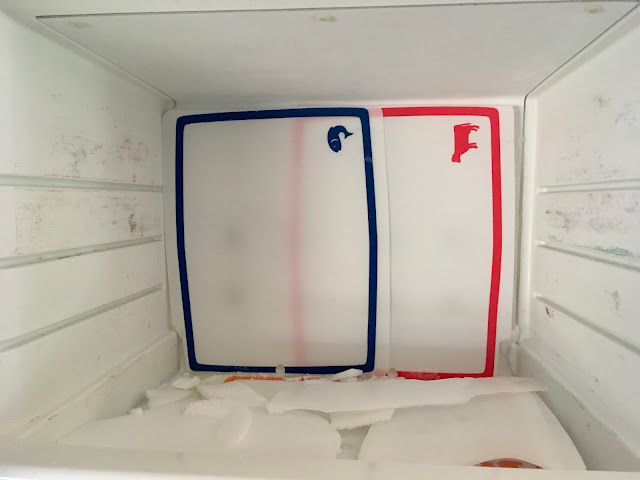 All the ice build-up now happens on the place mats for the most part.  Pull the mat free and flex.
Look at those slabs of ice.  Easy peasy. 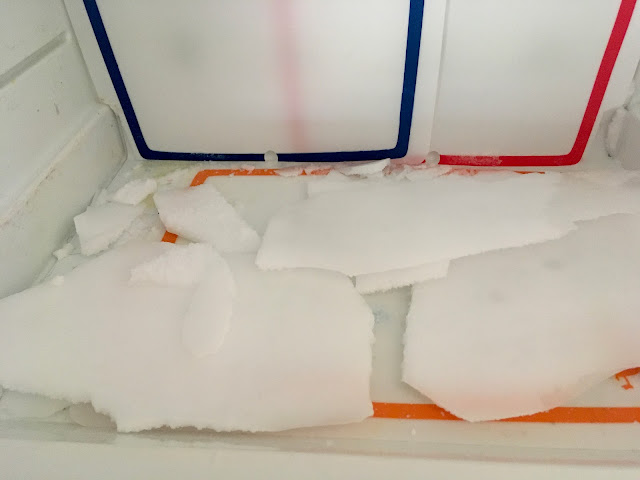 Doing some planning on where we will be staying on down the road I came across a couple of reviews for the Walmart in Hobbs, New Mexico.

“Store is nasty.  Lots of meth heads roaming inside and outside store.  Store is not stocked hardly.”
“Good stay but management advised to lock your doors.”
Okay, this place I just gotta go see and stay at.
Hey, did you expect anything different from me?
And that Barbara was what I had planned for Halloween, but we didn’t make it there in time.
- Comment reply -
“What would Beans bring to a potluck?”  Lizards.  Lots of lizards.
Posted by John @ Beans and I on the Loose at 10:00 PM

Great that you figured out the defrosting angle with place mats, and it took a bit longer to figure out the extension cord thing. But don't leave it out when it's raining (anticipating a shocking adventure.) Head pats and back scratches to Beans.

Now that sounds plenty scary, alright. Parked in a walmart parking lot over night as bands of roving meth heads move across the parking lot mumbling, "Allergy pills...must...buy...allergy...medication" beneath a waxing crescent moon. Behind a locked door, a small cat watches...and waits. Meanwhile, inside, Walmart has not yet stocked the Halloween candy.

Good one, Debby! Made me laugh outloud. Allergy med withdrawal can be ugly !:)
That is absolutely GENIUS, John! Both ideas! This is what seperates the true Traveler from the Vacationer.

I think those place mats are actually cutting boards. Being a thick mil they stay flexible in the cold. The fish is for fish, the cow is for beef. There is probably one for chicken.

Both the extension cord and place mats are great ideas!

Hey, you had two genius ideas, the place mats and the extension cord. Now it is time to rest, before having another genius solution.