I have no new photos since we’ve been cooped up inside all day to due the cold wind blowing.

This here is from while at Dumas, Texhoma Park last weekend.

She pulled all four dogs out from the back side door of that car.
I cannot imagine the smell inside that car. 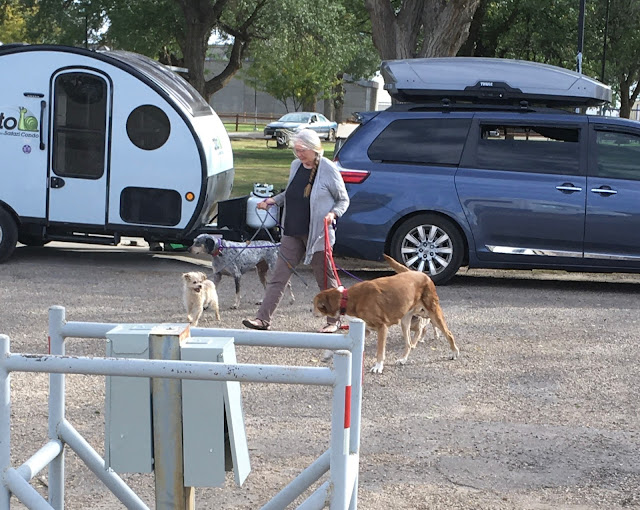 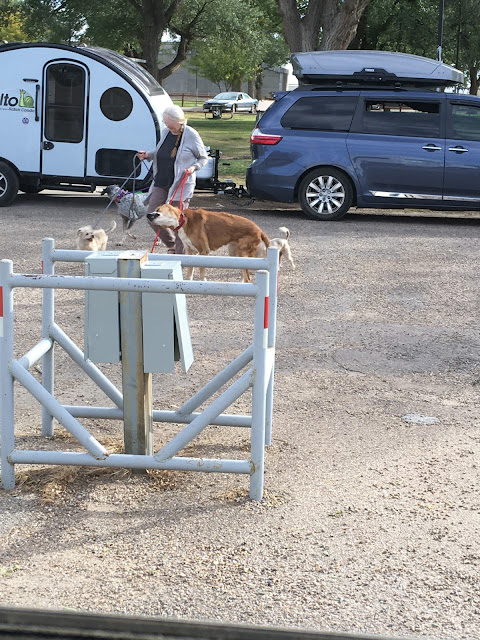 Four dogs plus her and her husband. Just where and how do they sleep at night in that small trailer?
The record though stands at ten or twelve dogs.  I forget which.  This was many years ago and we pulled over at a rest stop.  It was a truck with a camper shell.  All types of dogs, all sizes, kept coming out. 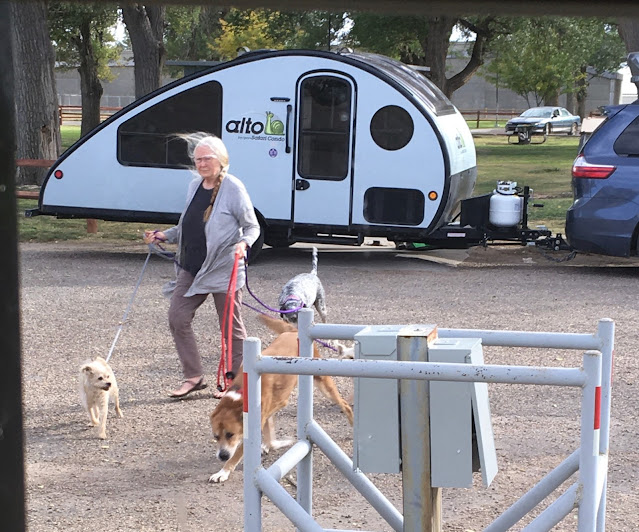 I spent the better part of the day catching up on my journal which will ultimately be this year’s eBook.  At this point it will be the longest eBook so far, Sinbad and I on the Loose aside for that one is a collection of stories over the many years.
Thank you all for your comments. I’ll just address them here.
I do enjoy a rainy day now and then. It forces me to focus on the journal, catch up on it and do some preliminary editing.  This time I had a lot to write, mostly about some of the people I had encounters with recently.  I refrain from putting too much about people on the blog in case they happen to look at the blog, as I have the title name on the back window.  I have thoughts at times as to removing it.
When we arrived here in Levelland I walked over to where we stayed before just to check that there were no electrical hook-ups over there.  The guy with the Silver Streak was outside.  I said to him “I’m not following you.”  He replied, “I saw you pull in. I saw your ‘cool beans’ back in Littlefield.”  I’m sure he meant the Beans and I on the back window.  I told him Beans was my cat.  So I met Tommy.  What a nice guy.  I learned the trailer is a 1969 model and they’ve had it for ten years.  There is so much more to tell about Tommy and the trailer, too much to go into here and so much I was unable to retain.  The information was coming in at me faster than I could process.  Tommy was full of stories.  I’ll let you know if another birdhouse shows up unless we leave before they do.
We will stay in the Quartzsite area of Arizona for the winter, but will move around that area more so than usual...or at least that is the plan for this winter.  Subject to change.
Beans was looking at the email as I read it and was greatly offended that in the third photo it was mentioned she looked like a dog.  She growled and jumped up into her loft.  She’ll get over it.
Yes, I have randomly ran into people I’ve seen elsewhere but nothing really noteworthy became of it.  Most instances of seeing someone again happens while at Quartzsite.  Usually people gravitate to the same spot each year.  If I’ve met them before, I will stop by a say hi if I’m tooling around on the Honda.
Its not like we all sit around the campfire socializing and have potlucks.  Sure some do, but the vast majority of those who travel like us don’t have a set regimented schedule of returning to the same RV park every year to meet up with the same people each year.  Most nomads are not like that.
Posted by John @ Beans and I on the Loose at 10:00 PM

What would Beans bring to a pot luck?

Thanks for the "catch up" during the rainy day...glad you talked to Jim. He does sound interesting. Some people can't wait to tell their stories, and it just gushes out. Nobody can retain it all. Where do you plan to do Halloween? Anyplace in particular?

Did you ask Tommy about the birdhouse? There might have been another story behind that!?

Like a clown car. The dogs just kept coming out. Must be the same strain as a horder.
Looking at her tiny camper reminded me of the tiny one parked across the alley from our home in Butte. The son and his wife were there for a time. I must have been about 8 years old and just had to SEE inside it. I waited until they were gone then squeeezzzzed myself through some kind of opening in the back. I was good at that. I looked around just facinated that everything one needed was in that little place. Like magic! I got to see and I was satisfied. I squeezed out before I got caught. Curiosity doesn't just affect cats, Beans. :)

That little Caravan (Trailer) looks like a TAB that has had the bottom chopped off. Would not like to share that with four smelly dogs and a parter

Do you ever get the urge to set up house and stay a while?

Good day John. This is Michelle, we met at Waylon Jennings RV Park in Littlefield. I had to leave due to feeling overwhelmed by all the rigs around me. A touch of anxiety. So I headed for the mountains in NM.
I'm truly enjoying reading your blog, very interesting. Please tell Beans "hello" for me. Maybe we'll catch up in Quartzsite for that meal together. Invitation is always open. Enjoy the moment.

Tell Beans I am so very sorry for offending her and that I think she is beautiful. I'm thinking it was just the angle of her head and maybe a leg. My family is always kidding me because I "see things in other things", mostly clouds.

Lol at beans reading over your shoulder! What a funny mental picture that conjures up! Tommy sounds like a happy soul...not unlike the author of this blog.

I am just such a question asker that I wouldn't need a potluck. I'd be so interested that I'd be blabbing away. I imagine that I'm just the sort of person that would send you running for a deserted desert!