Arteisa was seventy miles west of Hobbs and would only be an overnight stop at...yep, you guessed it,
another Walmart.  This is another one of my preferred spots at a Walmart.  At the end of the line, far away from the store next to the little island with a tree.  Sometimes Beans likes to go out for a sniff. 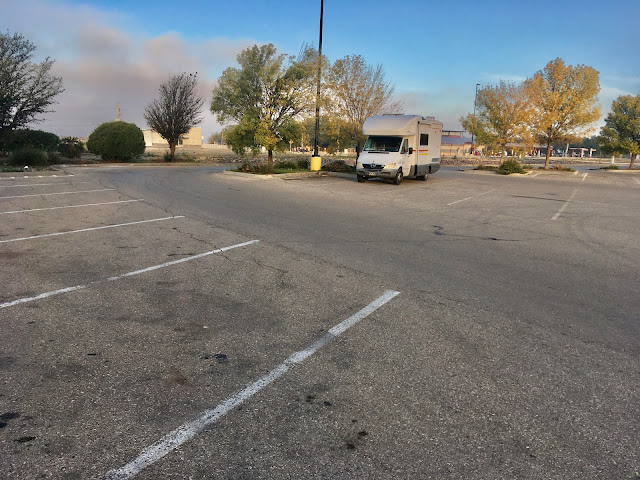 Our destination would be Alamogordo, New Mexico,
one hundred and ten miles away up and over the Sacramento Mountains.
These signs dotted Highway 82 all along the way.
I was becoming concerned about the climb, the descent and the projected high winds.
We got an early start in the morning. 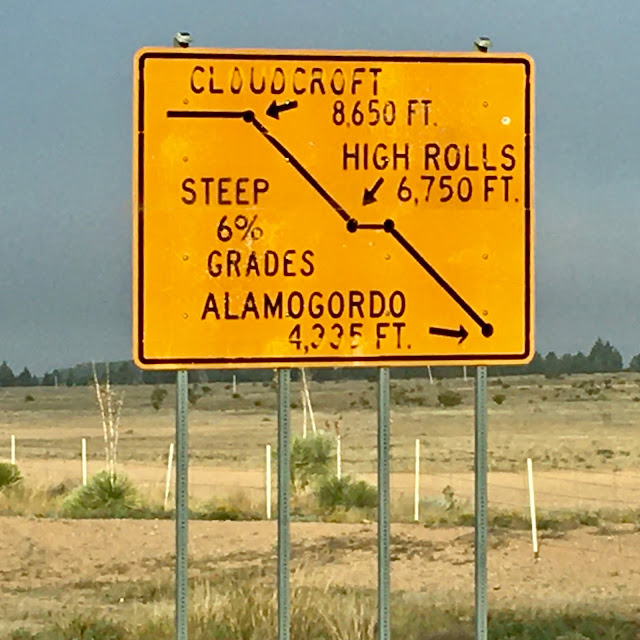 Half of the drive was across the gentle flatlands leading to the mountain range.
The high winds weren’t to begin until 1 p.m.
They arrived four hours earlier.
This was bad.  Very bad.  There was no place to pull over.
I gripped the wheel as best as I could.  My armpits began leaking.
Beans started in meowing.
Beans please, I don’t need that now. 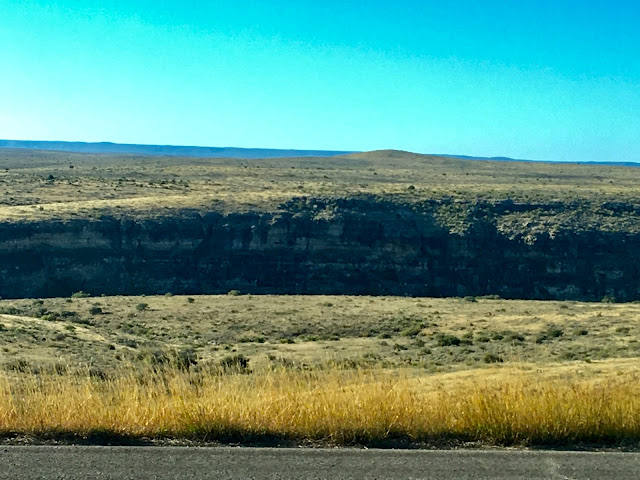 As we began the gradual climb the winds shifted hitting us head-on which was better than broadside.
Beans was still at it.
MEOW! 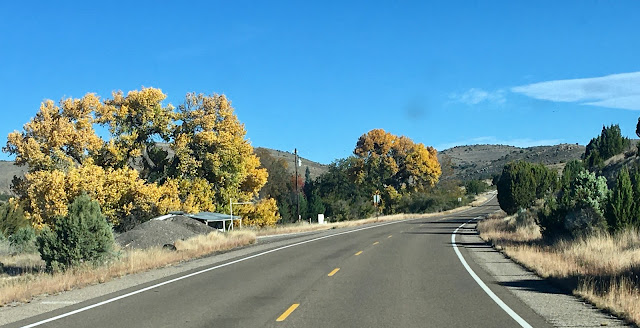 I could relax a little bit now.  The worst of the wind seemed to be over.  Try to enjoy the scenery.
Beans, please! 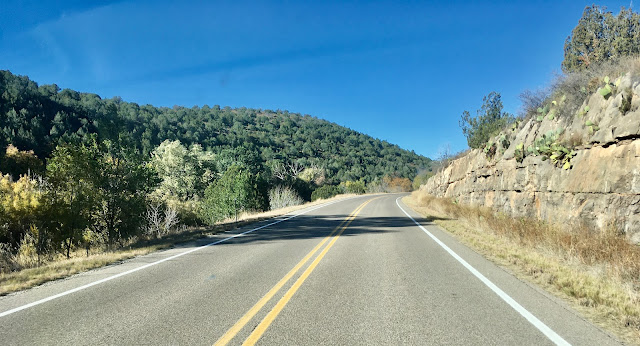 This is at 7000’ (2133m) and people live here.
I pulled over so she could go potty.  Maybe that was her issue.
Nope, she didn’t need to go.  Maybe the change in air pressure was bothering her.
It has happened before. 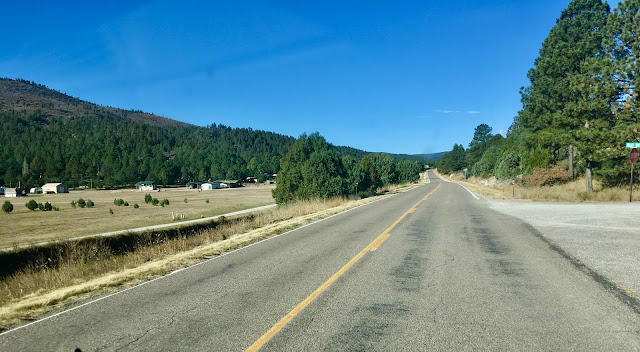 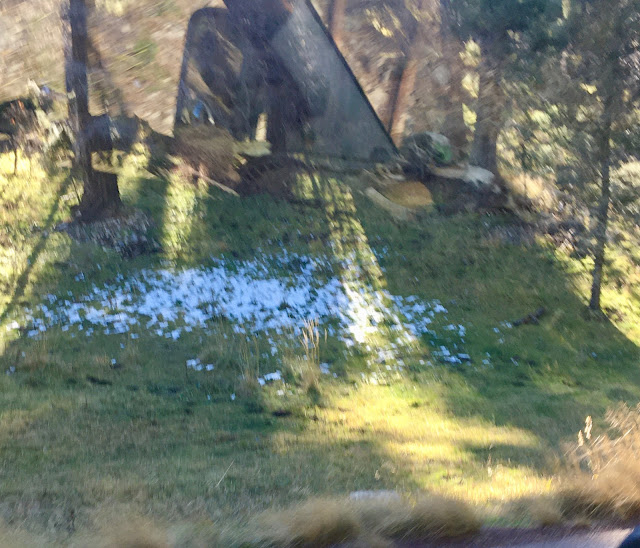 After nearly eighty miles we had the climbing all behind us.  Honestly it was an easy climb and could have been an enjoyable drive had it not been for the horrendous winds.
We both went potty at the brake check area.  Now ready for the final twenty-some miles to Alamogordo.
It’s all downhill from here Beans.
She was quiet the rest of the way. 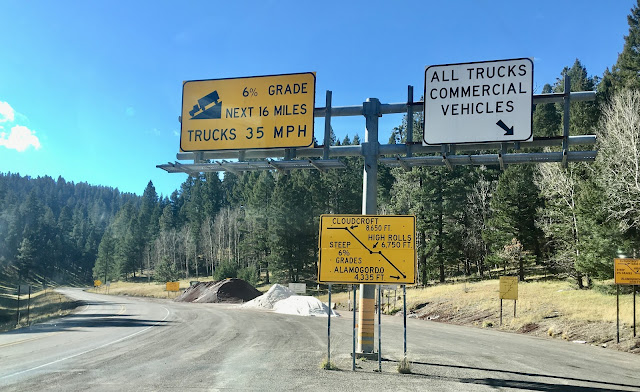 I shouldn’t have been so concerned had I really thought about it.  It was only a 6% downgrade.  Going over the High Sierra Mountains in California has steeper grades.  We’ve done them many times.
I was just over-thinking.  We’ve been in the flatlands all year and I over-reacted to those darn signs. 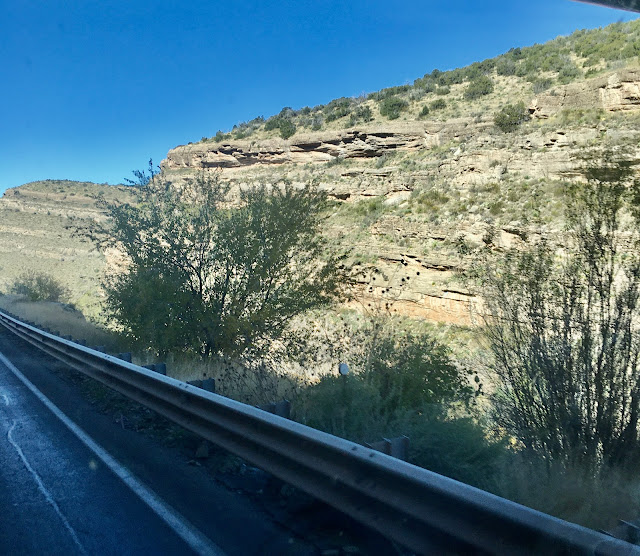 Most of the time we were in second gear going thirty-seven mph hardly ever tapping the brakes.
It was a carefree descent leaving the Lincoln National Forest.
Tunnel ahead. 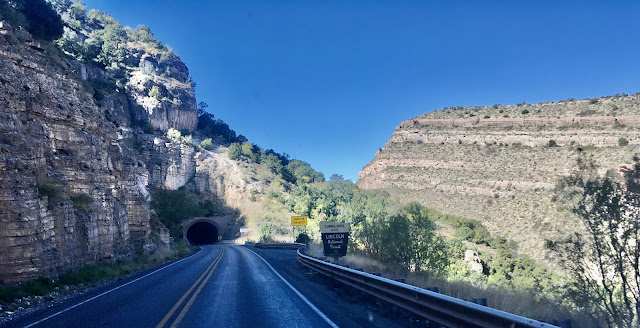 Alamogordo, New Mexico (pop. 31.384)
The wind was bad here in town.  It was supposed to be even worse the next day.
We would sit it out in another Walmart parking lot it looks like. 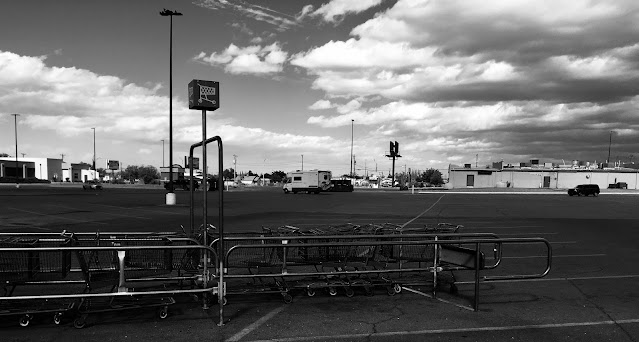 Beans reports: I was scared.  I could tell Dad was really nervous.  That scared the pee out of me.  But when Dad stopped to let me go potty, all systems had shut down.  I couldn’t go under so much pressure.  I sure was glad when I could pee finally.  My eyeballs were floating.  I hope we stick to the flatlands from now on.

Well done, Beans. Your poor ears must have felt very strange with the change in air pressure. I think Dad will agree with you about a bit of flat land for a while but you did see some beautiful scenery.

What did we ever do before Wal-mart? It has become an American institution.

I'm waiting for a Walmart delivery today, through an insurnace provider of over-the-counter items. Anyway, I agree with Sandi...what on earth was life like before Walmart. Beans, dear one, meowing like crazy may help pop your ears (babies cry to do the same in airplanes) but your dad could have used some encouragement as he tackled all those feet climbing the mountain! Just think it went over a mile above sea level!

It doesn't look as if the road was heavily trafficked. That would have made things even worse: the climb, the wind, the cat, AND heavy traffic? The stuff that nightmares are made of.

I've forgotten where you winter but surely you're getting close now. Seems like you could do with a break.

Glad you made it safely through the high winds and mountains.

We had those crazy winds all the way up in Albuquerque. It's the gusts that get you. I imagine your vehicle is like a wind sail. Bad enough here but when you are in the mountains, it's white knuckle time. I love Cloudcroft. I imagine you've been to White Sands? Such a strange phenomena.
Beans is part of you. You are her security. She thinks you should be able to fix everything, even the wind.